I’m having trouble with DSD files lately. I’ve got a couple of DSD128 files lately that are slow to load in Roon. Roon keeps saying it’s a hardware problem. I’ve got an Auralic Aries to decode and an Antipodes server, so it shouldn’t be that either can’t decode the files. But maybe I’ve got the settings wrong in Roon to accept those files. I think I should be supported up to DSD256 as far as I know. What should the proper settings be in Roon to accept all DSD files? Or is it possibly something else I’m missing? Thanks.

By the way, I was wrong. I’ve got an Auralic Vega, not Aries. And what happens is Roon tries to play the file (DSD128) and stops 5 seconds into the file and stops and there’s the message that it might a hardware problem. Then it tries to play the next song with the same result.

Where are the files coming from ? Local/network? It sounds like a buffering issue ??

I can’t find the path you’re talking about. Here’s what I get when I go the Roon/Audio/Settings: 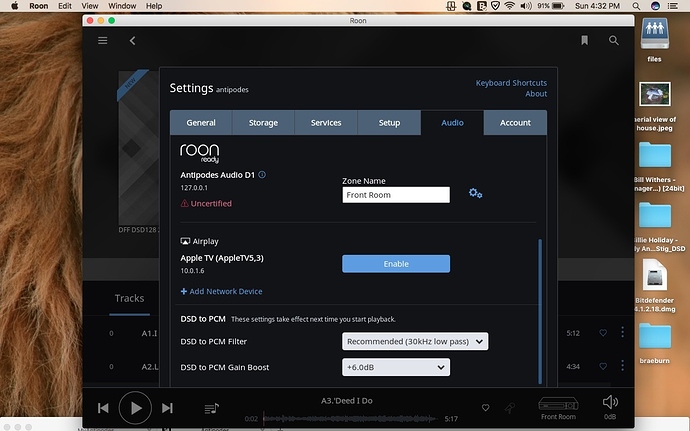 You may be right. The files are all on an Antipodes server. Here’s the message I keep getting: 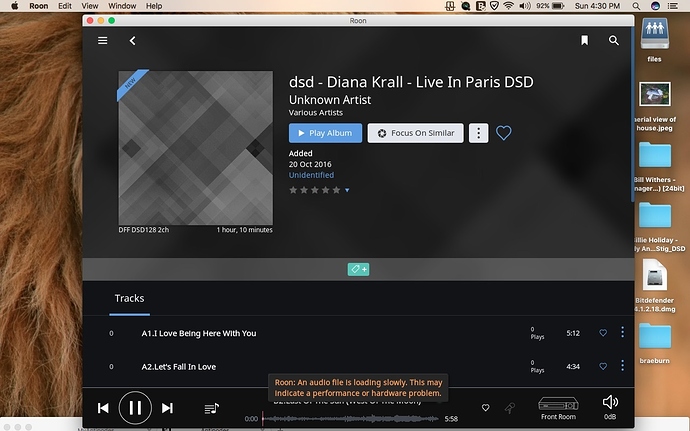 Where is your Roon Core running ? What is the Vega connected to ?

The Vega is connected via USB to the Antipodes. The files come from the Antipodes D1, then through the Auralic Vega to the preamp and amp. And it’s all running from a dedicated MacBook running the latest Roon. By the way, it seems all the files not working are DSD128. So for some reason, the DSD64 files are fine. Recently, I got a couple of DSD128 files that aren’t loading. And the Vega and Antipodes should be fine with them, as well as Roon, from what I know. As far as I know, I should be good up to DSD256, right? So my settings might need to be changed to accept the new files? Roon is playing DSD64, but not 128 and I assume above that too. Thanks for your help.

The audio path always goes through the Roon Core. If the Core is running on the MacBook, then the path will be Antipodes-MacBook-Antipodes-Vega.

Is the MacBook on WiFi ? If so, then that would be a bottleneck for the Core.

The Antipodes webpage refers to “Roon Server using Roon Core”, which sounds very odd to me. Roon Server is a Core and Output. It reccomends Roon Server & Roon Ready and draws a distinction which I don’t understand. Perhaps @mike can tell us if it is meaningful.

In any event the main thing to do is for you to work out where your Roon Core is running. I suspect it is on the MacBook, but it should be on the Antipodes.

Have a look at this KB page about Architecture which sets out the central concepts.

You can check where the Core is running from Settings/General. The first item is where your Core is. If it is your MacBook, try disconnecting and connecting to the Antipodes Core. The new Core will re-analyse all your music files again, but after that things should work better.

If you have existing playlists or metadata edits that you want to preserve, then you can transfer the database to the Antipodes.

If the Antipodes is already running as Roon Core, then we will have to think of other reasons for the problem.

The Antipodes is running as the Roon Core. 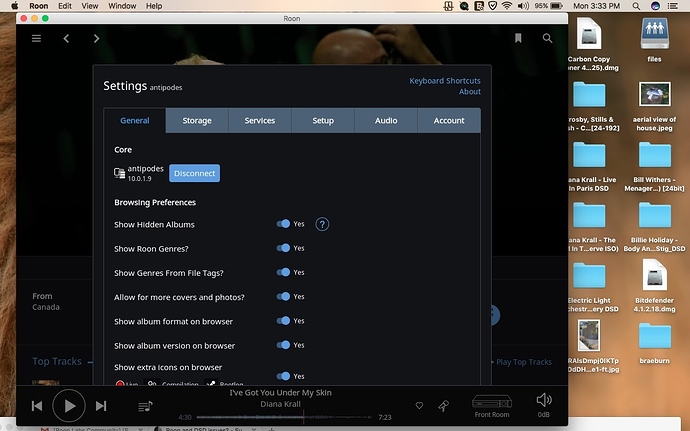 Thanks @rickcarl, that’s one theory we can discount !

Can you provide screeenshots of the settings for the Antipodes Front Room zone ?

Are there any settings on the Antipodes relating to its output to the Vega ?

The network address for the Antipodes (10.0.1.9) is not what I would expect to see. Can you provide further details about your network including what switches or routers you may be using ?

I will drop a flag for @support to investigate further.

Click the gear icon next to the “Front Room” zone in audio settings. You should get a new window with two tabs. Click on the “Playback” tab:

My guess is that Roon is interrogating the DAC for supported sample rates and it isn’t getting the right response from the Auralic to enable DSD128 so it’s trying to downsample to DSD64 on the fly. This is a fairly intensive process and I’m guessing that the Antipodes is choking on it.

Assuming that those settings aren’t the issue then it would imply that the antipodes isn’t able to pull data from the NAS fast enough to satisfy the stream. This could be a networking issue or a memory / cpu issue in the Antipodes. I’m not sure of the exact specs of the antipodes server, but what I’ve been able to dig up suggests that it has a rather modest Atom CPU which in my experience may be an issue with higher bitrate files. I have a Synology DS216+ here (one or two steps up in terms of CPU power) and it absolutely choked on 24/192 (which is a similar bitrate to DSD128). Bumping up the RAM in that box fixed the issue… but I digress. 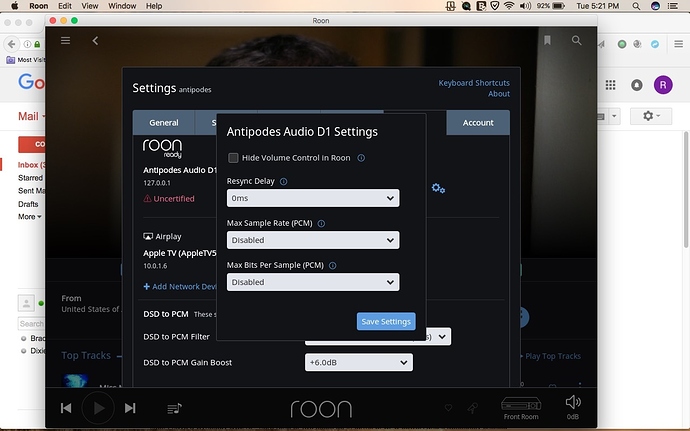 Hmmm… I had assumed that since the antipodes was connected to your DAC via USB that it was going to have the typical USB playback settings. Sorry for any confusion there.

What’s interesting here is that in your second screenshot there’s no “Max DSD Sample Rate” listed. See the attached screenshot for one of my Roon Ready devices (dCS Vivaldi) which shows an additional line for Max DSD sample rate. 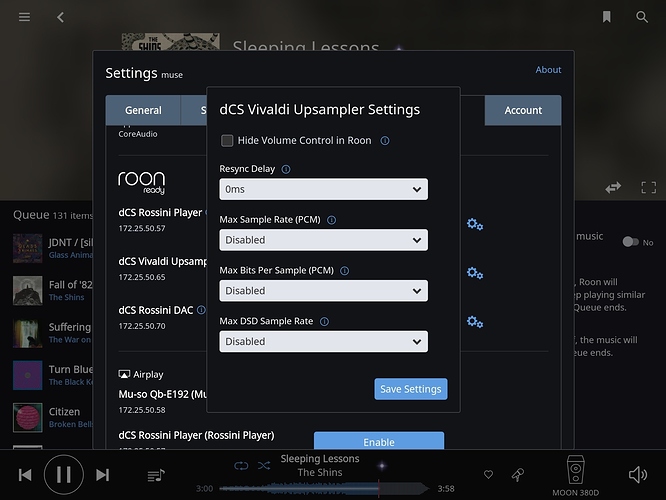 Out of curiosity, when you play a DSD128 file is the the little “signal path” dot next to the track name in your Roon control white? Does the Auralic show that it’s receiving DSD128?

I have to wonder if the Antipodes is properly identifying the capabilities of the Auralic and because of that is trying to resample DSD128 into something else. If that’s the case it’s a CPU and I/O intensive process and that could cause the buffer to run dry during playback. That would cause the error you’re seeing.

Check out the Roon setup guide from Antipodes:

On page 3 there’s a setting in the Antipodes GUI to enable DoP and DSD support. Is this checked on your system?

To clarify, the Antipodes Settings displays for the Roon Ready and Roon Core playback modes are different. 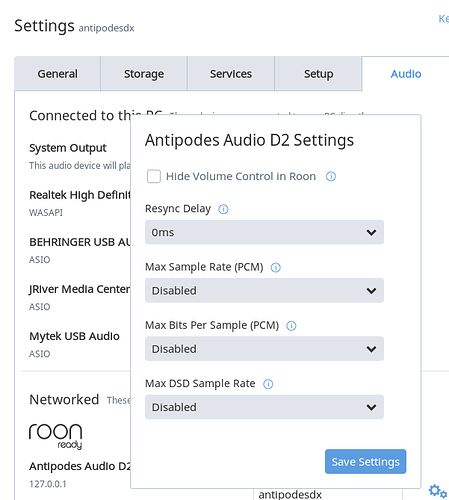 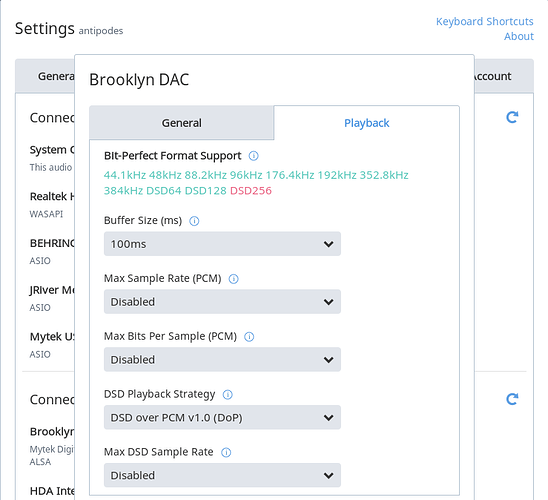 DSD64 and DSD128 show in the Signal Paths of both modes under these settings.

Right, but he’s not getting the option of choosing the Max DSD Sample Rate in the Roon Ready device config which implies that Roon isn’t seeing his DAC as DSD capable…which implies that the antipodes software isn’t presenting the device correctly.

My guess is that DSD / DoP isn’t enabled in the Antipodes GUI.

Valid comment … thanks. I thought he said DSD64 was OK but not DSD128, so assumed that was set correctly:

A. DoP not enabled: 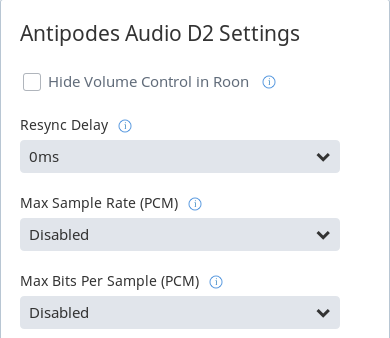 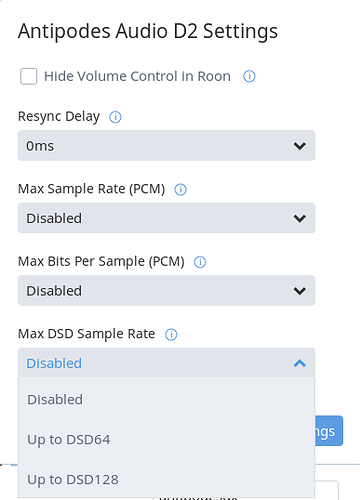 I’m guessing that DSD64 files were playing, but they were being converted to PCM (24/88.2?). With DSD128 the conversion would likely be going to 24/176 and that process was choking the core with the RoonServer process either being CPU or memory bound (or both). In that state the buffer underruns and playback dies.

I’ve seen this same scenario with low-power CPUs or light memory specs where the higher the bitrate of the data stream the harder it is for Roon (and the OS) to keep the buffers full.

So how do I set DoP in Antipodes?

In the Antipodes app: