Roon Core is on a Dell Optiplex running Ubuntu - nothing wrong here its using 4% CPU on that box.

Using Roon all morning no issues.
Stop and restart Roon, immediately goes into high CPU usage. It’s done this before, but this time I could catch it in the act and collect data.
Nothing is playing on the Mac Mini, only Roon activity is from the Dell Core to the Google CCA, the roon on the Mac Mini is just browsing the GUI and monitoring now playing. CPU continues to run high regardless of activity performed.

Being a software engineer and having read a few of the mac CPU threads on here are some points of data for your dev team. Let me know what more you need. :- 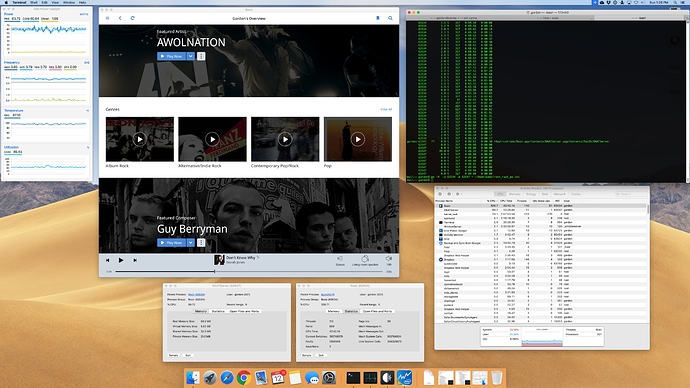 Sounds like this is very similar to the issue reported in Roon 1.7 causing MacbookPRO 2018 to run fans at high speed

To answer the questions you posted in that thread @noris

It’s consistent for hours no matter what you do in the app.

Also note that I have recently moved the core to its own Dell Linux box, the high CPU on the Mac happened both while it was the core and after the core was migrated and the mac is only a client. Once the core migrated to Linux, I removed the Roon dir in the Mac Mini Library and re-installed roon on the mac to clear any old lingering core things. The CPU going high issues was present (but intermittent) both before and after the re-install.

I have similar issues on mbp 15” 2018 i9 and also have tried with and without it as a core. It’s frustrating as I travel and run as core, but normally only run as remote.

Thank you for your report and for providing the additional details from the other thread, it is much appreciated!

I brought your report up with QA and they are looking into this behavior and compiling similar reports at this time.

Once the reports have been compiled, I will be sure to let you know of next steps in our investigation and how you can help, it may be a few days until then though.

I just hit this and reported it. No updates?

I have a similar problem with high cpu usage.

I have a similar issue on a MacBook Pro 2020, Catalina 10.15.5.
Roon app used as remote only taking huge amount of CPU (Roon and RAATServer processes)

Hi everyone First, I’d like to say that we appreciate your patience as we’ve continued to investigate this issue. After gathering data from a number of reports, as well as our own testing, we’ve traced this issue to a specific chip that appears to not be handling Roon how we’d expect. While we don’t have this resolved just yet, our QA team is in the process of acquiring this specific hardware for further internal testing in our labs. With this specific hardware in house, we believe we will be …

I have exactly the same problem running core on a new MacMini 2018 core i7 with Roon 1.8. The power impact is insane at an additional 80w of mains power. If the MacMini is rebooted the problem goes away but if Roon is stopped and restarted the high CPU and power usage returns. I have an older MacMini which never suffered from this issue.