Hi, I’m quite new here in the Roonworld. My Problem is that my Ayre QB-9 94khz Dac is not shown in the Audio Setup of Roon. But first it was! There i was running a mac mini Roon server with my QB-9. So it was possible to choose the exclusive mode, integer mode and so on. The sound was quite well. And now i have the sonic Transporter with a USB HD and the magical micro Rendu. My Expectations were great but i must confess that the sound isn’t quite as good as it was with the mac mini as a server. With the micro Rendu as an Roon endpoint my Dac is not recognized in the UI of Roon. with the mac it was! Did i something wrong? I tried out everything wich was possible for me. Has someone an answer for me.
Here you can see that only the micro Rendu is shown.
thx
R 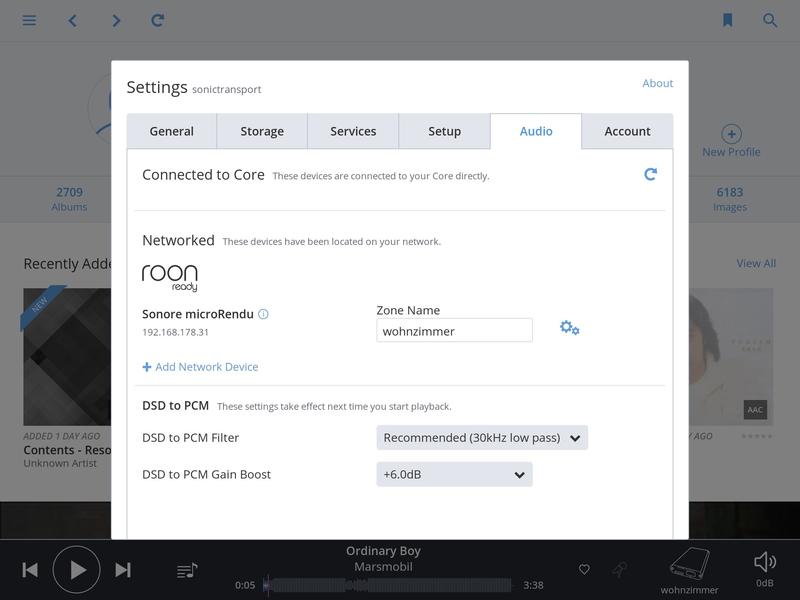 I’m not understanding the problem.

When you were running Roon on your Mac Mini connected to your DAC then Roon saw your DAC.

Now you are running Roon on the SonicTransporter connected to the mR and Roon sees the mR.

What would you prefer to happen ?

As to sound, I’m a believer in burning in changing the sound of new equipment (some aren’t). I’d suggest letting the mR burn in for a week or so before drawing any firm conclusions. I believe mine was still improving a month after I installed it.

Maybe there is a misunderstanding on my side! But i thought that i could enable Roon to run my Dac via microRendu in exclusive mode and so on. But the Dac is not on Roon’s list. This was the core of my question.
And as far as the burn in Time is concerned you are right! This takes a little time.

The mR is a Roon Ready device which supports RAAT and operates as a network zone Output.

Exclusive Mode doesn’t apply to network zones as the Ethernet/WiFi output doesn’t use the audio device in the computer operating as Core at all.

The mR is always effectively operating in Exclusive Mode, because it only receives and outputs one signal.

If you have the mR set to Roon Ready and connected by USB to your DAC, the DAC USB input selected and the mR selected in Roon then that is all the setup required for PCM. DSD has an additional step of selecting the appropriate DSD protocol in the mR.

You should be able to see both options - as long as your DAC allows for it - for example a USB and Ethernet option - that way you can use it with mR or without. Also with mR it has been reported widely that the sound can improve substantially with a better PS.

But the mR doesn’t use an Ethernet connection to the DAC, it connects by USB. A DAC would need two USB inputs to do that (the Ayre QB-9 has one).

Using two USB inputs would also preserve a galvanic connection between the computer and the DAC when one of the advantages of the mR is to isolate the DAC from the computer.

I would suggest connecting directly by USB or using the mR, whichever sounds better, but not both.

Did not explain myself clearly- two options one with mR via USB one without mR for example on my DAC I use the AIR option via Ethernet , a third possibility is AES output. The point is if the DAC allows for it other options should appear on Roon provided one sets up the alternative to mR.

Hi andybob, after just a few days of burning in i can say that it sounds so much better than at the very start. The soundstage and the depth of the sound are really impressing now. I’m happy! So you were right!