Thanks for sending the logs over! It looks like the backup failed because Roon could not access one of the file:

I wonder if the same issue occurred for the other hard drive, is there any change in behavior if you try to reboot your Roon Core and try again? Also, have you had a chance to check for hard drive errors on your Windows PC? You can use these instructions to do so: Disk Error Checking: How to run CHKDSK in Windows 11/10

If Windows found errors on this drive that need to be repaired, you need to scan & fix Hard Drive errors, bad sectors, file system errors & repair & fix them in Windows 11/10.

I ran chkdsk on both of the drives with my Roon backups.there were no issues found.

I also updated roon per the message I just received. I tried backing it up twice to two different drives. It failed to back up in both locations. I just uploaded the last four logs. The last two were the ones I just tried; once after I updated the roon software, once before.

Can you please confirm if you have any antivirus on your Mac? It looks as if Roon is trying to back up a file that is open by another program, it’s possible if an antivirus scan is running or something similar to when Roon tries to do a backup.

Does the backup process fail at the same percentage each time?

i dont have a mac. I have a windows desktop, running windows 10. I have no antivirus. windows defender is not on

i checked my security settings and tried again…it failed. logs have been uploaded.

Are you playing music ? Roon BU will fail if you are.

OT and not contributing to solve the OP’s problem, I know, but curious to learn about your setup that’s causing the failure?

At least with a WIN 10 based server install here, this is not true, no matter if backing up automatically or manually.
Music will simply be stopped by the BU process, needs to be manually restarted afterwards, but the backup is successful.

With @noris on the case and examining log files – a solution cannot be far behind! [based on my experience with the same issue and a much larger music library that was just successfully backed up manually to two external sources!]

no, not playing music at the same time.

I used a Win 10 PC as the core. If i was playing music at the time of the scheduled BU i would get a Red Triangle warning in thr GUI saying BU had failed

I have changed to a NUC ROCK set up but i believe that this is still the case. I will check and report back .as i recall if i go to settings back up scheduled bu it says last success date that implies this

Manual backups are my current practice, since I shut down everything when not in use.

My BU is scheduled

I just looked I have specific message saying “ BU failed due music playing” or the like.

This is on a NUC/ROCK core.

I thought this was “normal” . I always set my schedule for some time in daylight hours as I shut down overnight so it’s quite likely music is playing. I do a manual if I notice too many fails and a long span sine a good BU

This is on a NUC/ROCK core.

On my ROCK, the music stops and I get this screen -

When the Backup is done, I have to restart the queue.

I wonder what’s different , I inadvertently left music playing today . The bu is set for 14:00 , it failed with an error saying music was playing

Must be some configuration somewhere

Must be some configuration somewhere

Dunno. Roon is putting out this message? I’ve never seen one like that.

There’s not much configuration options for Backups, other than specifying location, retention and time. 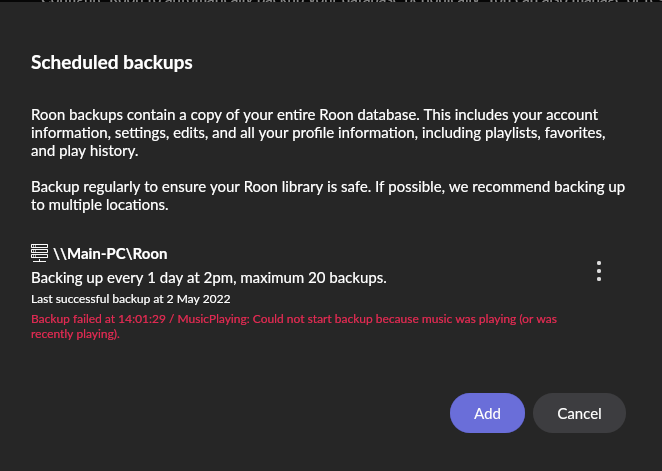 In addition I don’t see warnings anymore , they appeared in the Windows 10 GUI, if I don’t go looking I can easily miss a period of no BU like this!!

Hmm, the message does look familiar. Maybe the screen I showed is only for manual Backups. Do you still get your message if you initiate a manual Backup?

I’ll test it out tonight by leaving my music playing and letting a scheduled Backup kick off.

This was after a “Force Backup Now” with music playing 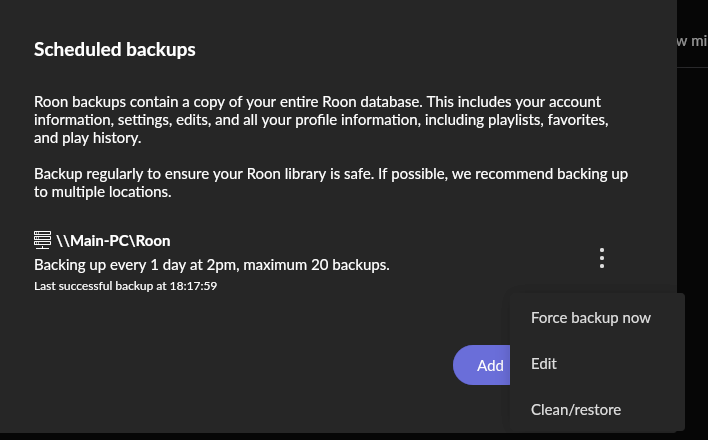 I believe if you are playing music and a scheduled backup tries to start then what you are seeing is expected behavior.
That’s why it’s usually done at 2am😉.
If you manually force a backup it will then halt the music and do the backup.