I have an external drive attached to Nucleus. I can access music files in a folder on that drive. However, when I attempt to set up Roon database backup using another folder (named Backups) on that drive, I get an error message. “There was an Unexpected error: NotFound.” Also, should I be able to set up a backup folder on one of my external drives connected to my iMac (running MacOS 12.5 (Monterey)? The iMac is on the same WiFi network as Nucleus, and I usually access Nucleus with this computer.

If that drive is formatted HFS+ then Linux can read but not write to it. If that is the case then you could copy all the music off, reformat the drive, and copy the music back.

You can also setup a share on the iMac and point the Nucleus to it. But you do. It want to backup over WiFi. In that case I suggest plugging the iMac in via Ethernet. There is a few on doing this, see: https://help.roonlabs.com/portal/en/kb/articles/faq-how-do-i-create-a-shared-folder-on-mac-and-add-it-as-a-watched-folder-in-roon

The easiest might be to just get a new external USB drive, format it to exFat, plug it in to the Nucleus when you want to do a database backup.

Jeff, welcome back to the forum. I’ll try to answer the second question first. Nucleus and ROCK systems can read but cannot write to Mac APFS, so I’m not sure you can create a backup TO a Mac. This again is limited to Nucleus and ROCK servers; if a Core is running ON a Mac, then R/W is not an issue.

As to your first question, what is the file format for the attached USB drive?

Thanks. As a test, I connected a USB thumb drive to the Nucleus. Although its format was MS-DOS (FAT32), I was able to create a backup folder using Roon, and was then able to backup the database in about 4-1/2 minutes. An odd thing happened when I moved the thumb drive to my Mac to view the contents. My Mac read the backup folder size as 3.4 TB on the 62 GB thumb drive. My guess is that’s due to an incompatibility between the current MacOS and the drive’s format. My plan now is to install an SSD in the Nucleus and use that for both my (high res) music files and the Roon backups. I assume that will work, and will check to be sure the SSD has an exFat format. I think 1 TB will be sufficient, since most of my music is sourced from streaming (Qobuz). I’ll probably get the OWC Mercury Extreme Pro 6G, which may be overkill, unless people have recommendations for something that makes more sense. Thanks again!

My plan now is to install an SSD in the Nucleus and use that for both my (high res) music files and the Roon backups.

Don’t do this. Backups should NEVER be held on the internal SSD of a Nucleus or ROCK system. You can store the backups on a USB drive (preferably formatted as exFAT if you want to be able to move it to your Mac as well) attached to the Nucleus.

Nucleus and ROCK systems can read but cannot write to Mac APFS, so I’m not sure you can create a backup TO a Mac.

Yes, you can backup to a Mac over the network. It’s directly attached USB drives that are formatted with HFS/HFS+ that you can’t write to.

Storage Devices  Roon can watch multiple storage locations for files at the same time. That means you can simultaneously use any (or all) of the following storage locations: Devices connected directly to Nucleus by USB If your music is stored on...

Are you advising this because if the internal SSD fails, the backups are lost?

I suppose another approach would be to install an internal SSD for music files, and use and external USB drive for backups. Or, I might be able to use a folder on my Mac’s internal dive for the backups if I can figure out how to set that up. I’m running MacOS 12.5 (Monterey) and it appears that file sharing is handled differently than earlier operating systems. Or, the “+Add network share” in the backup setup may be an option. It would be preferable to not have to use an external drive connected to Roon. If the backup resides on my Mac’s internal drive, that drive is backed up frequently, so I would have backups of the Roon backup.

Are you advising this because if the internal SSD fails, the backups are lost?

No, I’m advising it because you would be putting backups inside of a Watched Folder, which Roon Labs expressly advise you not to do.

My plan now is to install an SSD in the Nucleus and use that for both my (high res) music files and the Roon backups.

As mentioned by Geoff, you do not want to do this. Because Roon watches the entirety of internal storage, and Roon should not be watching the database backup which contains tens of thousands of small files.

OK. I’ll plan on using separate drives. From what’s been stated, apparently Roon operates in ways different from what I would have expected, where separate folders (one for Music and one for Backups) does not solve the issue of what is “watched,” and I suppose that partitioning a drive into two volumes also would not work.

I’ll plan on an internal SSD for Music and an external USB drive for database backups (which also could be an SSD I suppose).

where separate folders (one for Music and one for Backups) does not solve the issue of what is “watched,” and I suppose that partitioning a drive into two volumes also would not work.

The point is that the entire internal SSD becomes a Watched Folder, and therefore creating a Backup folder within it just makes it a subfolder, and hence inside the Watched Folder.

I reformatted an external USB drive to exFat, connected it to Roon, and was able to backup in about 2 minutes. I’m thinking of replacing the hard drive with a SSD which would be used exclusively for backing up Roon. I currently have almost 3,000 albums catalogued by Roon. I realize that database backups require much less storage space than the actual music files, and so I would expect that an SSD would not need to be large. Any recommendations on what size SSD would make sense for periodic backups of the Roon database?

The speed of an SSD is also not needed. Unless you have a compelling reason you can save money and use an external HDD.

Thanks. I agree that speed is not relevant here. For lack of a better term, using an SSD rather than a hard drive is more for esthetics. The simplest way to run the backups is to have the drive always on and powered through USB. The idea of having a hard drive spinning continuously, drawing electricity from the Nucleus, and generating heat, 24x7, for write activity that will amount to only a few minutes per week doesn’t appeal to me. From what you point out and what I surmise, even a 120 GB SSD will be sufficient. That size SSD is inexpensive, a basic enclosure is not expensive, and I think I already have an enclosure that will accommodate the SSD.

I had an old 1 TB HDD I wasn’t using. I put it in a case and plugged it into my Nucleus and back up every night and keep 30, and back up once a month and keep 12. Works perfectly.

The idea of having a hard drive spinning continuously, drawing electricity from the Nucleus, and generating heat, 24x7,

Sure, I understand. But, most modern usb hard drives go into a sleep state when not in use and are not continually spinning or generating heat. In fact, the energy pull when idled is small.

That’s good to know. The drive I reformatted to exFat apparently is not a “modern USB hard drive.” It was purchased in 2016, initially as a backup drive for music or photo files. Now, connected to my Nucleus, I can hear the drive spinning when I place my ear close to it, and it’s warm to the touch when I place my hand upon it. In the 2.5-inch drive category, it looks like I can purchase an enclosure with an SSD for less than the same enclosure with a hard drive, since the SSD will be lower capacity than the hard drive, and the lower capacity will be sufficient for this purpose. Also, if I get a new SSD for the Roon database backups, I can use my old (larger capacity) hard drive as an additional backup for all the CDs I’ve ripped

Will Roon automatically create (and date) separate backups; or does one need to create folders and select a folder prior to each backup? Also, can backups be deleted when working in Roon, or does the drive need to be connected to a computer to delete specific backups, or is this done through the network?

No folders needed. It’s all automatic. You can delete backup’s, if you want to, from within Roon. 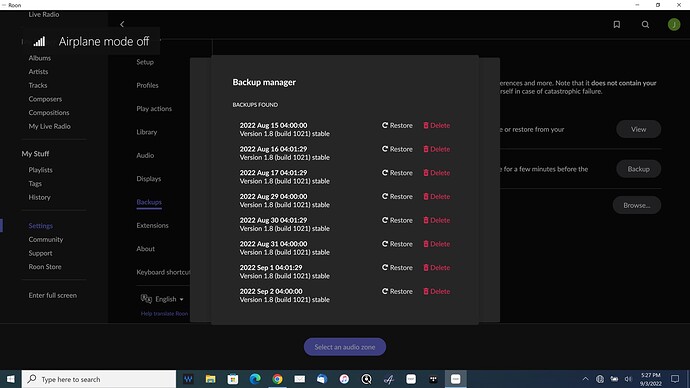 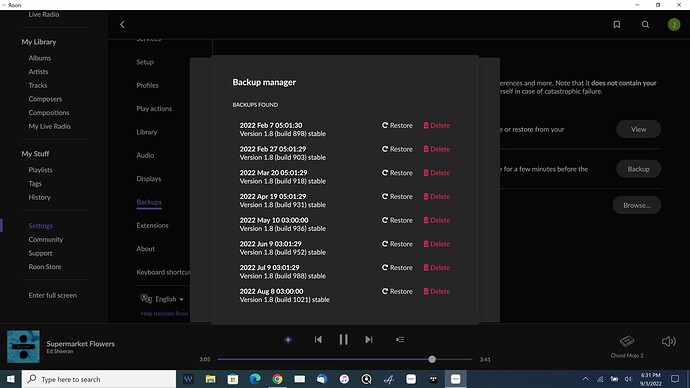