Interesting that switching WiFi seemed to help although wonder with the other ap if you are just getting a better signal?

Bummer! Hoping I can figure out a way to get these working. Got a quote to install in wall ethernet but was hoping to avoid the cost and potential for it not to work out as planned.

Well, the signal strength is roughly the same (I took before/after measurements in 8 locations around the house) but I haven’t had any of the previous issues of Bluesound devices vanishing or audible dropouts. Or Room remotes being slow to start/vanishing for that matter. Of course, I realise its very hard to generalise anything helpful from this 1 example though.

Interesting to hear of the Sonos syncing issues - I know that BS have suggested that RAAT has a high bandwidth requirement for maintaining syncing on grouped devices, which might be relevant there.

Interesting you bring that up as well because ever since I upgraded to 1.4 I’ve had very frequent occurrences of Roon remotes being slow to start and vanishing. I never had that issue previously. I’m wondering if a lot of this could be secondary to 1.4 requiring more bandwidth than prior versions of Roon. Unfortunately I installed 1.4 around the same time I upgraded the rest of my system to blue sound so hard to nail down which is the culprit, although in my trial run of moving my blue sound node 2 from downstairs (where it was wired) to using it wirelessly upstairs I had no issues initially over a 2 day trial run, which I did before/around upgrading to 1.4.

I have measured signal strength around my house and it’s usually pretty great outside of the furthest corners (much farther and on a higher floor than the blue sound). I have a blue sound pulse flex (approx 1.5 years old) which I take outside on my deck when the weather is nicer and it worked perfect up to 24/96 files but had a few drop outs with 24/192 files (inside was flawless previously). Now inside the house I have frequent drop outs using pulse flex. I have outdoor cameras further out that work without drop outs on wifi (although need far less bandwidth but just to demonstrate the larger area covered by my wifi). Speed wise I can pull anywhere from 150-350 Mbps over wifi to the internet (I have gigabit FiOS). I’ve checked visible wifi networks in the area and there are no networks that look new (not exactly scientific but there aren’t many visible networks around me). I’ve also tried changing the channel on my 2.4ghz band to make sure no other networks are using it, to no avail, including trying multiple different channels with no other networks (again not many networks in my area).

Hoping @support has some experience or suggestions with this. I’m wondering if other people have had more issues with 1.4 or if it’s all a red herring and there is something else going on.

Thank you all for the reports and sharing your feedback with us, but most importantly thank you for your patience here. I understand how frustrating these types of situations can be and myself along with the rest of the team are ready to help understand why you are experiencing these issues with your Bluesound devices.

Moving forward, I had a chance to discuss your posts with our tech team today and as per the conversation the team has asked for the following information (if you have not provided it already):

Thanks for reaching out. I think I’ve sort of spelled out my current setup in my original post:

My setup is as follows:

MacMini running High Sierra wired to a gigabit switch which connects directly to my router (Netgear Nighthawk X8). The switch goes to a wired Bluesound Node 2, for which I’ve never had any issues.

Dropouts during the song that skips to the next track, but then have inability to play next song until I either: group the blue sound to another blue sound zone or unplug and replug the power to the blue sound. Grouping to another zone instantly fixes issue (and then I just ungroup them).
Dropouts and then skipping through entire album and saying nothing in que.
Player disappearing from roon, requiring either waiting a while for it to come back or unplugging and replugging power.

Where do I find the RAAT SDK version?

My issues are not predictably reproducible, it may work fine for a few hours or may have constant issues every song or two. The most common issue is a song finishing and roon not starting the next song. Grouping with another zone and ungrouping fixes it.

I Added a range extender to see if it would help. I didn’t have issues in the brief time I used the system I connected to it via Ethernet but as I said it’s unpredictable when these issues occur. Haven’t had a chance to see if the Extender helps the other room that is running node 2 wirelessly.

I would add that roon remotes frequently struggling to connect over WiFi is definitely new since upgrading to 1.4.

Hi @Nicholas_Caruana ----- Thank you for touching base with me, the follow up is appreciated. A few things moving forward.

I am going to be enabling diagnostics on your account as mentioned in my previous to see if we can try to determine this behavior with your Node2s. Secondly, the RAAT SDK version can be confirmed by clicking the little “info icon” next to your Bluesound zones under “networked” in the “audio” tab. Example below. 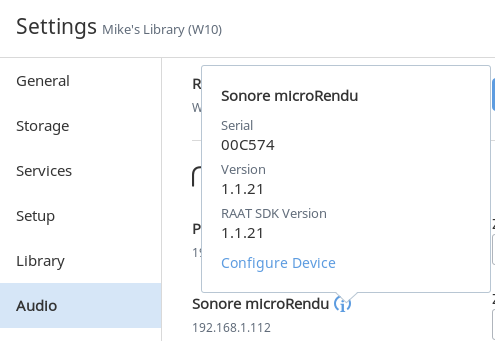 Also just ran into my usual issue of roon stopping playback and not progressing despite having the bluesound in this room wired into a mesh range extender (netgear nighthawk x6s).

i’ve had similar issues, and i believe its a bluesound, not a roon problem. i solved mine by moving from an Airport based network to an Eero, and since i’ve had no issues.

Bluesound uses the 2.4GHZ channel, not 5G; check your router settings and see how your network is configured.

Thanks for the input but we’ll aware it uses 2.4 as based on my prior posts above. Still running into issues despite trouble shooting my 2.4 band and adding a mesh extender that also uses a 2.4 band.

I already have a Unifi network, it’s not the network

and also the wired device stops playing and dissapears so… it’s something between Roon and Bluesound.
I will not continue to use Roon cause it’s not good enough.

@Eric any updates? Threads been cold a few days now…

My trial ran out without it getting fixed so, not buying.

You can always jump in again when it’s all sorted.

Hey folks – Eric discussed this thread (and a few other Bluesound threads) with myself and our developers, and so I wanted to provide a little update about status.

I also want to acknowledge we understand how frustrating these kinds of issues can be, and we wish we could guarantee dates when issues will be resolved – anyone that has even a passing familiarity with software or hardware development knows these things almost always take an indeterminate amount of time.

Our support team routinely works with our customers and partner companies to identify and resolve complex issues in our ecosystem. When an issue involves a partner company’s hardware or software we’re often happy to take the lead communicating status as we work through the issue, so our shared customers aren’t caught going back and forth.

Just keep in mind that just because we’re communicating status, that doesn’t mean every issue is under our control or something we can solve unilaterally.

@mike - good to hear these issues are still being actively addressed, though it’s rather disappointing that there isn’t more transparency about them on the Bluesound forum (clearly no fault of Roon).

…though it’s rather disappointing that there isn’t more transparency about them on the Bluesound forum (clearly no fault of Roon).

Having recently spent some time over Christmas looking through the Bluesound forum, you can easily come away with the impression that any Roon & Bluesound issues could not possibly be the fault of Bluesound. They just suggest you take the issue up with Roon. I’m not prepared to play ‘piggy in the middle’ in such circumstances so me and Bluesound are done.