Build 269 has removed Roon Server uptime display from the ROCK status page. Is this a bug or an intentional change?

It’s a bug, should be fixed for the next release.

Noticed as a result of a recent ROCK or Roon Core build (not the very latest one, one before), that I lost the uptime status on the Roon Server Software (Roon Core)
I have it for Roon OS running on the NUC.
Was this intentional, as normally they are the same, but you can stop/start/upgrade Roon Core, separately from Roon OS.

It would be good to show the overall % CPU usage or load, with Mem usage on the NUC on this page too. These should be available in the embedded Linux core 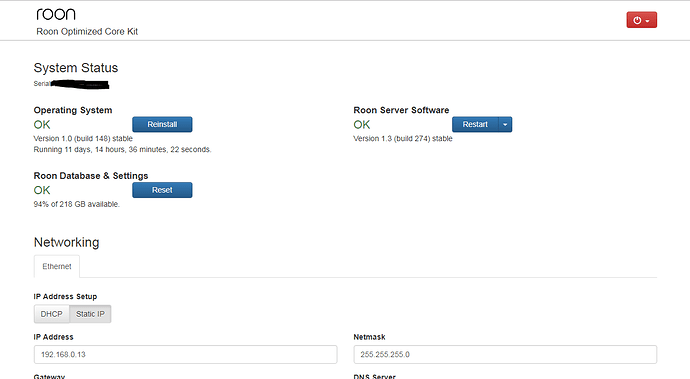 I agree, I was monitoring the uptime of the Roon Software compared to the server as I was noticing “oddities”.

Known issue. It was supposed to be fixed, but it has not.

It’s a bug, should be fixed for the next release.

The uptime bug is in ROCK, not Roon, so the fix wouldn’t be in a Roon release.

I don’t think we’ve made an official decision on this stuff, but Danny commented on it a bit here:

This is counter to the spirit of ROCK. Even if we gave it to you, you’d have no ability to do anything to fix the erroneous condition. If we gave you the ability to fix stuff, we’d just be going down a road of creating a larger more bloated operating system. If you need this, run Linux Ubuntu or Debian or Arch, and not ROCK.

The uptime bug is in ROCK, not Roon, so the fix wouldn’t be in a Roon release.

That is what I would expect, that ROCK would be responsible. But I specifically recall the disappearance right after the build 269 update. Coincidence?

Yes, but it is just to see that i) the NUC is running ok & that it is doing something (so just a window), ii) the effect of any required or added DSP, down sampling or up sampling on the NUC & ROCK.
My NUC is an older pre NUC4, an i3, 8GB & 128GB mSata SSD, so I am keen to monitor it.
I’m all for minimal embedded OS devices, I have built something similar with the RPi I have running Asset UPnP server, as the other playback route for my Naim NDS.
Thanks, Simon

I won’t say never, but this type of monitoring is not on my list right now. It’s my opinion that you should not be “monitoring” your ROCK install. ROCK is designed to not cause problems on the machines it is meant to be run on.

I’ve heard valid concerns raised by people running in fanless cases or on older 4th generation NUCs, or non-NUC machines. If those people are super concerned, then they should be running your own Linux and using Roon Server.

ROCK is meant to be turn-key, free of issues, and should not cause mental baggage or stress. Settings and status can cause a form of baggage/stress that makes software feel “not easy”. There are alternative Linux distributions if you want to need the settings/monitoring – but right now, I’m not turning ROCK into that product.

The one thing suggested that is interesting is disk space usage – but I feel this is better suited in the storage screens of Roon, as this applies to non-ROCK installs too.

I’m running a NUC7i7BNH in a fanless chassis…that’s why I would like to have visibility of the temps. Not a must have but some temp monitoring would be nice to have rather han having to crash everything running with a shutdown and hit the BIOS to see how things are temp safety wise. Something other than never is certainly better then nothing at all

I’m running a NUC7i7BNH in a fanless chassis…that’s why I would like to have visibility of the temps. Not a must have but some temp monitoring would be nice to have rather han having to crash everything running with a shutdown and hit the BIOS to see how things are temp safety wise. Something other than never is certainly better then nothing at all

I did the Roon OS work for the fanless Nucleus w/ i7 – I understand the loads Roon creates, how it changes that CPU’s temperature, and how a fanless case can dissipate the heat.

When the temp gets “hot”, it gets so hot so quick you have about 1.5 seconds before shutdown. I’m talking about going from 50C/60C to 130C+ – this happens when your thermal coupling is broken.

Normally Roon OS runs cool – it doesn’t have a middle mode really. Either we use CPU or we do not. If we do, the thermal coupling better work, if we don’t, then we run cool enough for even basic coupling.

If you feel like you have a strange situation or want to monitor/control this yourself, that’s perfectly fine, but ROCK is not for you. I don’t think I can be more clear on this.

So I see from the title of this thread that ROCK build 150 has been released. My ROCK is currently on build 148. How can I get it updated to the latest release? Is it automatic, or do I need to prepare a new USB stick and reinstall from scratch? Thanks.

I also see from my “About Roon” page in Roon Settings that the ROCK Core section is stuck on “Checking for an update…”. That doesn’t seem right either.

I was prompted to update when I started the iPad app.

Nope, not happening here. My other Roon remotes have been automatically updated to B276, but the Roon Core on ROCK is still stuck on B274. I think a reboot is called for…

OK, rebooted ROCK (from the ROCK web page), and now I see an install button for build 150 of ROCK OS on the Roon About Settings page. That’s installed the latest build of the OS, and now the update of Roon has been downloaded and installed automatically. So everything now seems OK.

Yes, it took a reboot of ROCK, before the Roon OS would update, then the Roon Core update was applied.
All seems fine, however, the order of the albums added has changed, with 3 previous added albums, now showing as added today, but previously added albums which was the last, now further down the list.