Suddenly Roon cannot identify Tidal tracks anymore.
It says: Adding music to library: Of 10 tracks, 10 added, 0 identified.
Why is that? Have tried to logoff my Tidal account and logged on again.
This has never been a problem as of today.
My previously importet Tidal albums are all OK.

I had the same problem and it is not solved. 6 out of 7 eagles albums was suddenly identified after fiddling around.

The last album I had to identify myself using edit section.

Other albums like Madonna - Madonna is still failing even with manual identify.

Happy to hear I’m not alone. I hope it is resolved soon.

I think we had some server problems earlier, and @joel resolved them. That would explain this.

Are you still seeing this issue?

Still having the issue, Yes.

I have had v slow album ID this evening too. I noted it at the weekend also and @joel confirmed all was up and OK.

I suspect something has been occurring. 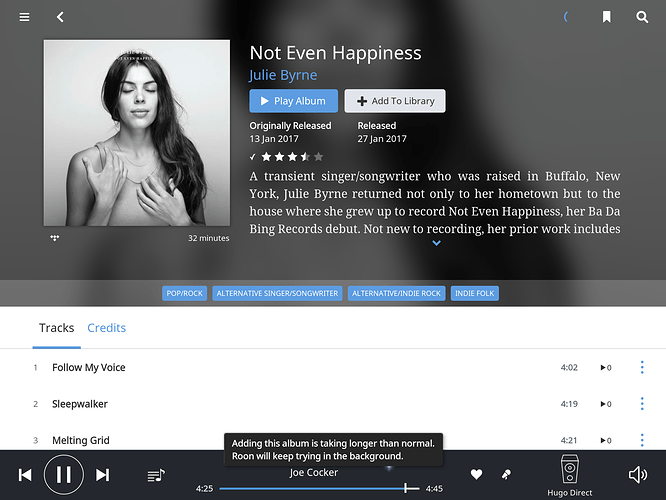 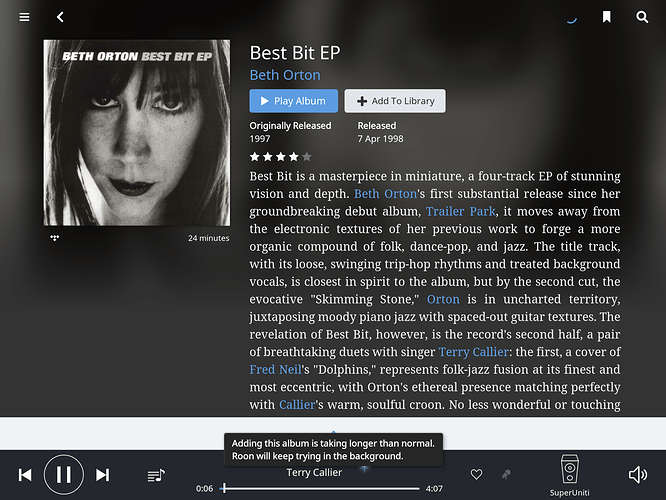 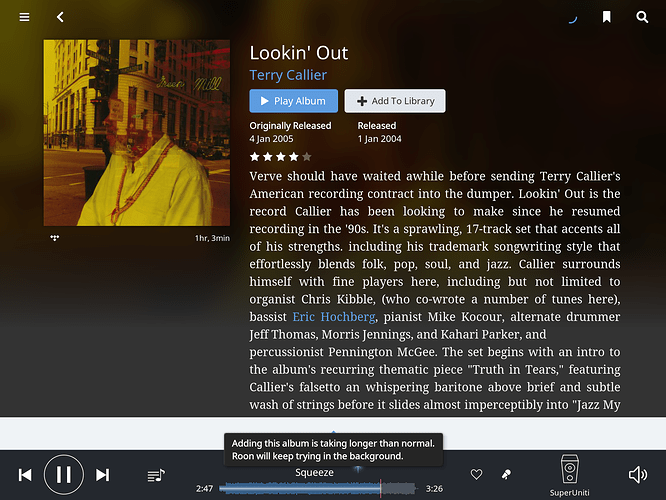 Also, since the last update, the ‘Background audio analysis’ has still 6787’ tracks to go (Fast, 1 Core)!
What’s going on?

I guess @joel is quite busy at the moment…

I’m still experiencing this as well. As Ulf said, I did find that by editing the album and “identifying” it, it immediately finds the correct one. But, yeah, there is still something funky going on when you add Tidal albums. Spinning progress indicator “Adding music to library”, never increasing the # identified. Also, my install crashes if you add more than a couple of Tidal albums quickly.

And it’s now fixed (for me anyway)

I had these same issues earlier today. For me, I was migrating my core from a Windows 7 laptop to a standalone Debian Linux box and I about drove myself nuts trying to figure out what I could have done wrong with the Roon Core installation or in moving my music files to a different drive or even in restoring my backup. I finally ran out of time and had to stop for a few hours and when I came back everything seems to be back to normal for me as well.

We have had some issues with the Roon Cloud Identification service over the past couple of days. A lot of work was done yesterday to figure out what was going on and to fix it. (It looks like we hit an existing problem in the code which only started revealing itself with the recent increase

in identification request volume). We hope this is fixed now.

Apologies for any inconvenience / concern.