ok, sounds weird but getting the “unable to start streaming. check your qobuz account and try again” only on Sade. (so far, but that’s the only artist seemingly having issues)

other artists from qobuz, no problem.

playing sade on tidal, no problem.

Tried logging out of qobuz on roon and back in. No change.

Worked prior to 1.8 but it’s probably been a while since I played that artist… so no idea if 1.8 has anything to do with it.

Hello @terzinator, I wanted to confirm the artist and the issue you’re seeing. Here’s what I’m seeing for that artist in Roon, is that what you’re seeing as well?

thanks, no, I can actually see albums… (although it’s listed under “discography” not “compositions” 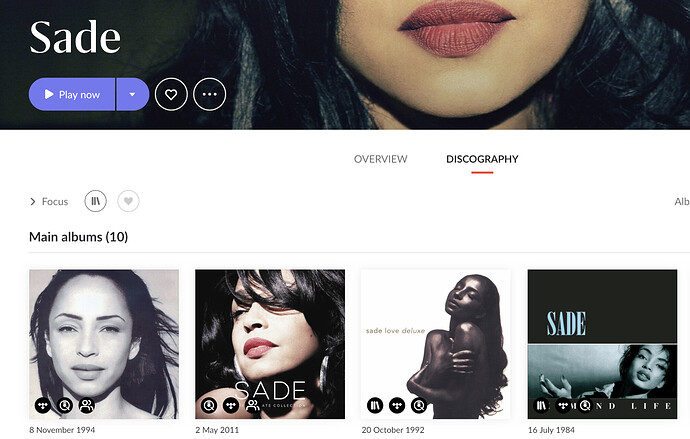 could just be certain albums that aren’t streaming, not just the artist.

but I tried the first two albums there in the collection above, and they play fine.

thought it might be because Diamond Life is in my Roon library, but other Qobuz albums in my library play just fine also.

ok, it appears that the album that was in the playlist is gone from Qobuz. It doesn’t say “unavailable” like some tracks do.

I’m able to follow the new file back to qobuz.

The old file, not so much.

But, would be nice if it had a flag saying that the file was bad, rather than the account was bad. (If that makes sense.)

I had the same issue a week ago, I have a 300 song playlist from Tidal & Qobuz, when looking through my playlist some albums were not showing a cover and or some albums would list a Track as Unavailable, of course the exact Track I had included in my Playlist.

I Spyglass searched for the album, added the song to my playlist and deleted the one that was failing and all is well. Not sure what is going on but does Qobuz move music around or could it be Roon’s mapping into Qobuz.

I fixed all my bad tracks so I also don’t have any examples.