Hi, I am noticing that some of my albums are missing tracks and some albums have tracks which do not belong in the album. My albums are organized by folders on my hard drive. Is there a way for Roon to enforce that? Eg., add all tracks in a folder to an album and do not combine tracks from different folders into an album. Thanks.

I noticed this behavior with the last update as well. Had tracks from multiple albums grouped into new partial albums. I.e 6-7 tracks pulled from different albums like stevie wonder and the o’jays incorrectly grouped as a unidentifiable box set “what it is 70’s soul”

Yes, also Roon seems to split albums and so 1 or 2 tracks from an album will be in a separate album from the rest of the tracks in the original album. I was starting to combine them manually, but it got too tedious especially given I am finding tracks which don’t belong in the album altogether grouped in the album! Anyone know of a fix? I tried re-tagging the files with an external tag editor (eg to make sure the “album” tag for all songs is the same), but that did not solve the issue.

My albums are organized by folders on my hard drive. Is there a way for Roon to enforce that?

This is how it’s supposed to work, although tags and file names are also taken into consideration. Sequentially numbered files in a folder (whether they’re sequentially numbered by the track number tags or file names) should always be “clumped” into an album, and for multi-disc sets you can follow the guidelines here.

Are you guys seeing otherwise? Can you give me some more information about how the files are laid out on disk, or how the files are tagged? Feel free to upload media (with original folder structure) to Dropbox or similar and drop me a link so I can confirm all the gory details myself. Thanks!

Happy to…I don’t use dropbox. Do you have a place I can upload to?

Yup, just sent you a PM.

Ok, uploaded files for 2 albums. In my library, each album is in a separate folder as represented in the rar archive. The way these are presented in Roon is as 3 albums:

Thanks! The uploaded file is called hammer.rar

Hrrm, files seem to import fine for me, both track lists look complete. 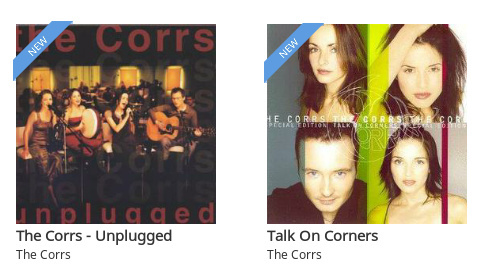 Can you describe your storage configuration @hammer?

My files are stored on a local drive in a directory called FLAC. Pretty simple. Is there a way for me to upload my Roon db so you can see it? You can see in the first picture, 2 two unplugged albums. The second picture shows the single track split from the main album. The third picture shows the extra track 13 from the Talk on Corners album.

Thank you very much for helping me look into this! I would hate to delete the Roon db and re-import from scratch!

Can you give me the full details of your setup?

And just to confirm, you’re not using our iTunes import feature are you? Just a single folder in your Storage settings, D:\Flac or something like that?

When you first imported these albums, did this happen? Or did this seemingly happen later? Does the import date for both albums match what you’re expecting?

No, I don’t use iTunes. Yes, the two folders I sent are under the main FLAC folder which is D:\FLAC\

I can’t say I noticed this when I first imported over a year ago (when Roon first supported HQPlayer). All files show the same import date of 12/23/2015. (Even the “misplaced” tracks).

Come to think of it, when I first installed Roon, my music files were located on a Windows Server 2012 R2 and I recently (within 6 months ago and after the import date of 12/23/2015 for these albums) moved them to the local drive. I changed folder locations and Roon seemed to have kept all my library edits (eg., track name changes etc)…

Also, since these two albums are in the online Roon DB, I did not make any customizations to the meta data.

Thanks @hammer for all the details. Nothing obvious is jumping out at me, so I’m going to discuss and see if anyone else has any ideas.

If you’re interested in doing another test, first make a backup. Then, start by shutting down your Core, locating your Roon database, and renaming the Roon folder to something like Roon_main. Then, reinstall Roon from our website and point it at the same FLAC folder and see if these albums have the same problem on a fresh import.

I ask you to run this test because it’s possible that a bug here caused issues when you first imported these albums. If that happened, there are scenarios where the bad track listing might have been “frozen” in place – in that case, it’s possible you and me are chasing a bug that’s already resolved

If you’re still seeing the issue on a fresh import/database, then something about your setup or environment is different from mine, and there’s still a bug here, in which case we need to figure out what makes your setup different so I can get this fixed.

If you’re game to run that test, it would be helpful. Afterwards, you can delete the temporary database, rename Roon_main back to Roon, and you’ll be back to normal. I’m going to discuss with the team in the next 24-48 hours, and will follow up with you after that either way. Thanks @hammer!

Mike, I don’t think it’s the case that this is the result of a bug which has since been fixed. What actually prompted my noticing this “splitting” of albums was due to some albums I imported last week. However, given I had already manually “combined” them, I did not use those as examples for you and instead selected the two Corrs album which I was able to take screen shots of.

That said, is there a way to delete specific albums and re-import those? Rather than starting from scratch? Or is the only way to remove albums from my database is to delete/rename my current DB?

That said, is there a way to delete specific albums and re-import those? Rather than starting from scratch? Or is the only way to remove albums from my database is to delete/rename my current DB?

To be clear, I wasn’t suggesting starting from scratch, just running a test and then going back to the main install.

Anyway, to answer your question, Roon tracks each file in your library using the audio content of the file, as opposed to the file name, path, or tags. This means you can move files to a new hard drive or folder, or update tags, without Roon losing your edits, playlists, etc. It also means that moving a file out of your watched folder and back in again won’t trigger a re-import, since Roon will recognize the files.

What you’ll need to do is first check Library Maintenance, which is Settings > Library. In most cases, you should see very low numbers there, since this represents files Roon is tracking, but which have since gone missing.

Assuming you are seeing zero (or very few) missing files listed there, you can move the albums you want to reimport out of your watched folder, confirm the album has disappeared from your library, confirm the number of “missing” files is reflected in Library Maintenance, and then clean up those references – keep in mind this will erase any edits, play history, playlist appearances, or tags associated with those files. When you move the files back into your watched folder, Roon should recognize them as new imports.

The test I described above is less destructive, but let me know what you find either way, and I’ll be in touch soon @hammer. Thanks!

I tried the “reset” DB test you suggested and the two Corrs albums imported correctly. However, the recent albums I mentioned which triggered this still do not (eg., albums split into multiple albums). Maybe I should upload those for your review instead? Also, some of these files did not import at all, so maybe you can help with that issue as well. Thanks for all your help.

@Mike, any update on this issue? Thank you.

However, the recent albums I mentioned which triggered this still do not (eg., albums split into multiple albums). Maybe I should upload those for your review instead? Also, some of these files did not import at all, so maybe you can help with that issue as well.

Yeah, maybe we can reproduce with that media – the files we looked at don’t seem to reproduce anymore, so maybe those got split when you first imported them. The “clumping” would’ve been frozen if you’d made any edits to them,

Can you send me the other media and we’ll have a look? Thanks!