I had one album (locally stored) by Emil Gilels (a Soviet pianist) to Roon. Roon had not identifed the album, but as the files are extensively tagged, all data was shown fine. At this time, I did not yet have any composition by Norvegian composer Edvard Grieg in Roon.

Just now, I have added one album (again local files) of pianist Lucas Debargue which contains one piece by Edvard Grieg. Roon identified this album.

NOW, all of a sudden Roon believes that the album by Emil Gilels (a live recital from 1964) is performed by Edvard Grieg, the composer (who died in 1907).

What is happening here, and how do I get rid of this error? 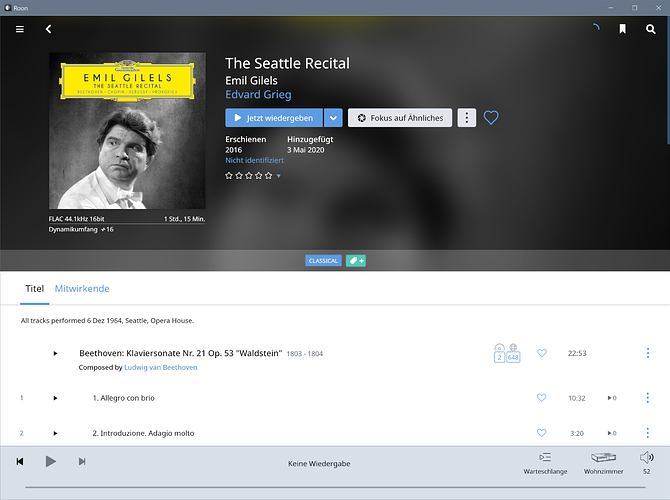 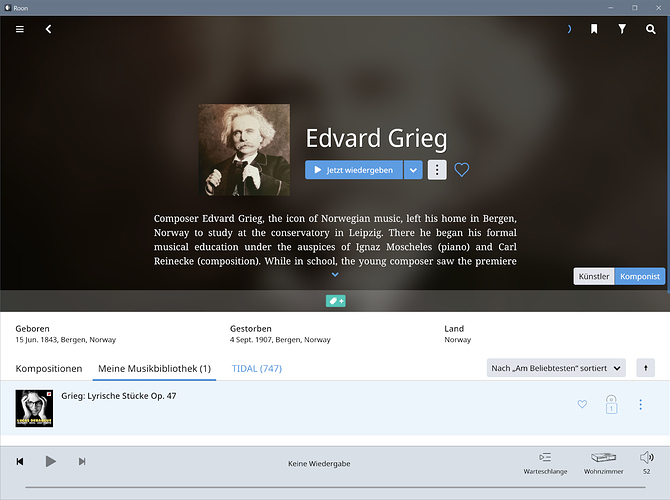 This glitch may be the result of the metadata provider coding Grieg as an Artist, not as a Composer. This is easily fixed by Editing Album/edit Album Artist and/or Primary Artist Links.

This is an unidentified album (Nicht identifiziert), so is probably worth double-checking your file tags for this album.

Joel, the file tags are not the issue. All of the files tags indicate exclusively Emil Gilels as Soloist, Artist, and Albumartist. Not ever once is Grieg or Edvard Grieg mentioned. 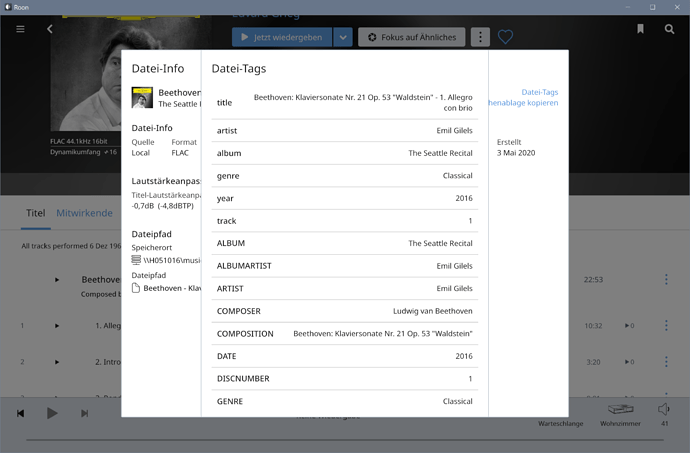 I guess that Roon, once it has added Edvard Grieg to the database (as composer), also tried to see if Edvard Grieg appears in other unidentified albums. Apparently Roon guesses that “Emil Gilels” in the file tags is a misspelling of “Edvard Grieg”?! 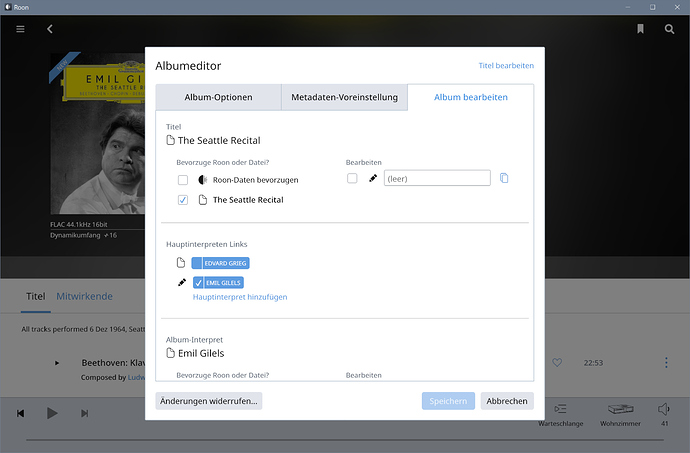 Now, the link to “Edvard Grieg” next to the album cover is gone. However, below it still states that all tracks are performed on December 1964 in Seattle by Edvard Grieg. 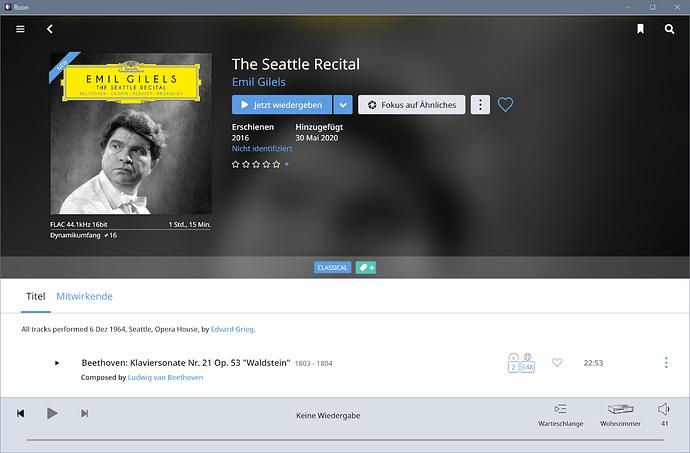 @Martin_F Thanks for confirming your tags. I know what is going on here… Someone mistakenly credited Grieg as “Emil Gilels” on Musicbrainz, so we think that the Emil Gilels on your unidentified album is an alias for Grieg. I will fix this (on Musicbrainz).

Thank you for your immediate response, Joel.

What should I do now to have this changed reflected in my Roon?

Martin, it will take a week for the edit to be accepted into Musicbrainz. Then it could be up to a week for your library to pull the new Grieg metadata, depending where in the update cycle it falls.

I would probably revert your edit: click on “Änderungen widerrufen…”, check “Haupinterpreten Links”, and then save (“Widerrufen” ?). It should then fix itself automatically in the timescale I have suggested.

Joel, thank you. I reverted all changes I did to the album and will check again in a week or so.

Incidentially, I have another issue with this album that I have also elsewhere: How do I identify an album of local files if the track numbers do not match up?

The problem arises because sometimes I split local files into several files. In this case, track 4 are Chopin’s variations on a Mozart theme, followed by Prokofiev sonata (track 5). In the original CD (and in Tidal), the Chopin variations are just one track of 15 minutes. I have split this one track into eight files, one for each movements of this work. As a result, the track count is off. The original album has 17 tracks, my local copy consists of 24 tracks. In the original album, the Prokofiev sonata which follows the Chopin variations is track 5, in my local album however it is track 12.

As a result, Roon has trouble identifying the album. In the “Identify album” dialog, I have chosen the right album (which has 17 tracks). Roon has added in the left column 7 blank tracks at the end to align with the local track count of 24. The problem is that my local album does not have 7 additional tracks at the end, rather my local album has split the original track 4 into tracks 4 through 11, and original track 5 and onwards align again with local tracks 12 and onwards.

I do not understand what I need to do now to align the left column with the right column so that the local album is properly identified? In other words: How do I tell Roon that track 4 in the album Roon knows corresponds to tracks 4 through 11 in the local album I’m trying to have identified? 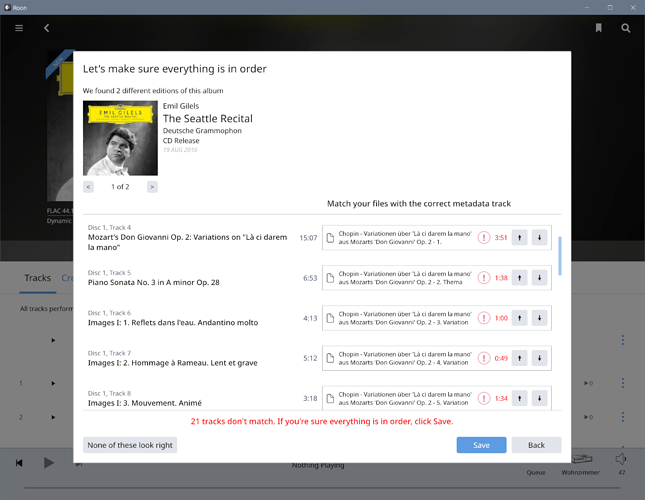 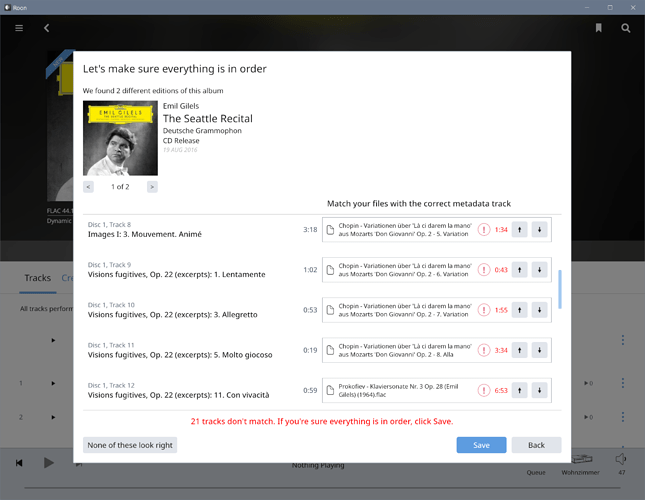 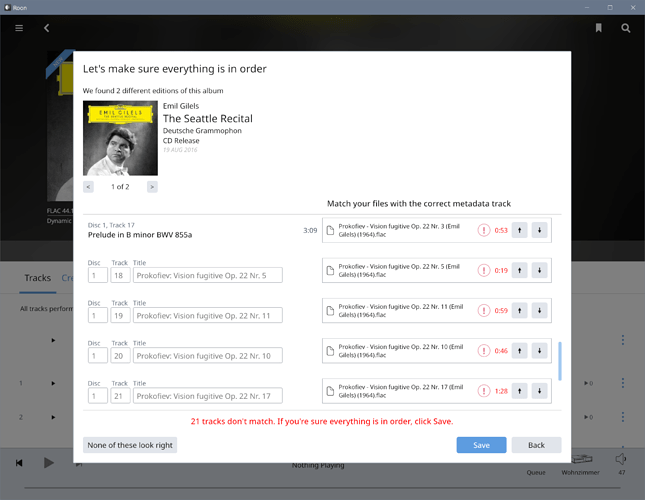 This is not an officially supported method here, but you should be able to get where you want by shifting some of the extra tracks on the left and just ignoring the track time mismatches.

Note that this will likely result in losing composition / performance benefits unless you’re using WORK/PART tags.