May I suggest adding this unit to the list of Roon Core Kit compatible servers? 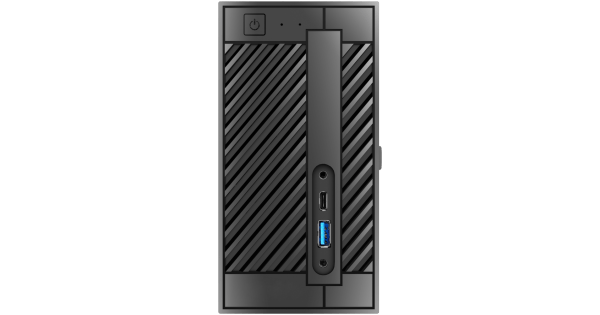 It’s barely bigger than the NUC’s, fit’s a full desktop Skylake I7 6700 processor, has both an M.2 PCIe SSD slot and 2 SATA ports for dual 2.5" drives for storage. The new inexpensive and blazing fast Intel 600P M.2 PCIe SSD’s can be used for the OS:

And dual spinning hard drives or SSD’s for file storage up to 8tb. It’s readily available world wide, and costs even less than the Skull Canyon NUC when equipped with the I7 6700. Even less with the I5 processor. 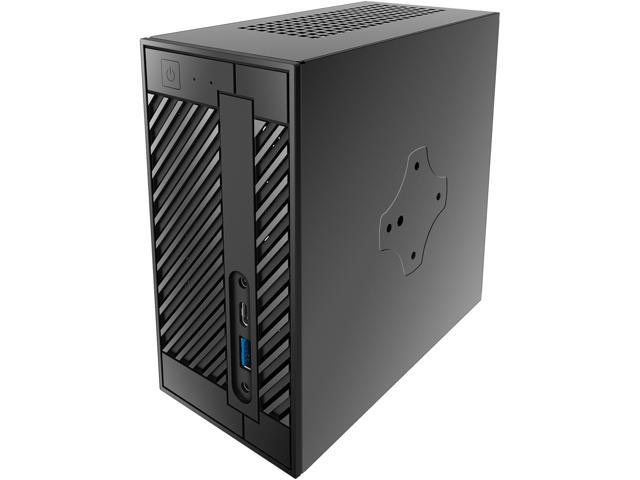 I compared it head to head with Skull canyon NUC as a Roon/HQplayer server, and running the most demanding HQP algo’s up-sampling to DSD 256, both average 30% CPU load.

Noise wise running Hqplayer at 30% CPU is less than the Skull Canyon NUC. The cooler has much more surface area and it’s very well ventilated.

File storage up to 8 tb, but it won’t be usable

Why not? It would be if they made it usable. I think the problem with the NUC’s is they don’t have both the combination of M.2 and dual 2.5" SATA based storage. Which is likely the reason for the USB or SAMBA only limitations. Or perhaps maybe because the UUID of each individual hard drive may be needed to auto-mount easily. However if a feature was made to identify and add the UUID, this could be a solution for that. I think it would be a more rock solid solution having the storage on-board. Also reduces cost and complexity, as well as box count. Increases access time as well.

“We’d like to support internal storage on the SATA port too, but the BIOS and USB formatter are giving us great trouble with this.”

May not be the case with the Asrock.

It may already work… let’s see when it is released. If it is a minor change to support, I don’t mind adding it, but it will not be a suggested setup.

It was already released months ago. I’ve been putting it through the paces comparing directly to the Skull canyon NUC. With the I7 6700 running Roon/Hqplayer performance is on par with the Skull Canyon. It runs much cooler, and produces less noise. Cost all in with the I7 6700, 128gb Intel 600P M.2 PCIe SSD, and 8gb DDR4 2133 ram is $569 from Newegg. You can also pop an I3 or I5 in to save even more money. With dual SATA storage drives it’s really the perfect single box platform for the RCK. If the RCK is all about simplicity, making it a single box solution removes additional complexity from the setup. It also improves reliability by not needing to rely on untested 3rd party NAS’s, as well as untested network gear for file access. One less thing to cause potential issues.

It was already released months ago.

I think @danny was referring to when Roon Core Kit is released (which won’t be available until Roon 1.3 is out).

It was already released months ago.

That’s a pretty sweet box, and a possible alternative for ambitious DIYers that understand the limits of RCK.

For example, you can’t use the SATA storage ports with RCK because RCK doesn’t support non-USB storage.

I made the suggestion with the thought that adding SATA drive support could be a possibility with a bit of tinkering around. Your earlier comment suggested that you made an attempt with the SATA port on one of the NUC’s, but some obstacles got in the way. Perhaps the Asrock hardware is a bit more friendly with their Linux driver support?

However having spent considerable time with the Skull Canyon NUC, Without SATA drive support there’s probably no point in using this Asrock machine instead of the Skull canyon. It is more compact, with comparable CPU power. Also has more ports on it. Although the SD card reader and Thunderbolt port aren’t supported in Linux yet as far as I know.

The problem is not that there is driver issue, it’s that we have problems in the procedures for installing on to headless machines.

As for tinkering, you can’t tinker with RoonCoreKit – the first update that comes, and it’ll blow away the partitions, and all your tinkerings. I’m curious why you even care about Roon Core Kit…

Okay sounds good. I didn’t realize adding SATA support would be difficult. But you know best as it’s your product. I was referring to you guys doing the tinkering to add the support into the OS, not modifying it myself. I care about the RCK because it sounds like a killer setup. I just thought it could be even better with this hardware and on-board storage.

I have an idea that might make it work… looking into it.

Sounds good. If you do get it working it might be a good idea to do the testing with specific hard drives that are readily available at a good price as well. Then everyone can buy the same drives. This will increase reliability and predictability even further. It’s nice when everyone is using 100% of the same hardware. It eliminates all of the unknown variables that can’t be reproduced in the lab if hardware related issues arise.

Keep in mind it only fits 2.5" drives that are 9.5mm thick max. This means 2tb max for spinning drives. Not sure why they made this limitation as I don’t think adding the extra 5.5mm height to the case in order to accommodate 15mm thick drives would be a deal breaker for potential customers. Perhaps it was to limit the current draw from the SATA bus? Not sure. Anyways SSD’s are only 7mm thick and you could use 2 of them in 4tb. But big bucks.

You’d probably want to have mirror RAID with drives like WD red pro like features. Don’t know if they do this format. But I would hate to lose my music due to some hard drive crash.

Best to just backup your collection to external USB drive. RAID only adds complexity and leaves you with half the storage space. I’m not a big fan of RAID personally. All it achieves is wearing out 2 drives faster. Simply backup periodically and the backup drive only runs during the backup process rather than 24/7. You’ll get 100x the life out of the backup drive.

While I agree that backups are better than RAID and keeping backups external rather than in the same place as the NAS is even better than that, I wonder if this is what we would expect a RCK user to do as he’s looking for a simple turnkey “don’t need to look at it again” product.

What I like about the RAID and the NAS drive features is that it will tell you immediately that there is a problem rather than retrying to get some data and you can simply replace the drive without doing anything special like copying over data.

Again it’s not a replacement for backups at all, it’s just more convenient for some people.

If folks choose this hardware, nothing is stopping them from connecting a NAS as well to do automatic daily backups if plugging in an external drive is too inconvenient. Most people don’t buy new music every single day so it wouldn’t be too much of a chore. Also the music needs to come from somewhere. Either download from music site, or rip from cd. So another computer needs to be involved. So what’s the big deal about sending a copy of the new albums to both the internal storage and USB backup drive at the same time?

What I would love to see is Roon connect up with all the major online music sellers such as Hdtracks, Acoustic sounds etc, to browse their selection and buy right inside of Roon. This saves the need to have any other computer involved to add new music. But I suppose that’s a different feature request

If anyone wants a budget build based on the Deskmini 110 here’s a suggestion:

Just add storage drives. Still quite powerful for the price. The processor is cheap enough that it can always be upgraded to the I7 6700 down the road when they get dirt cheap. 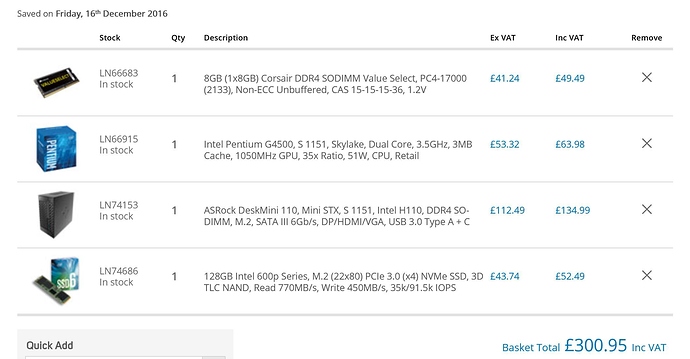 Compared to the 6 gen I5 NUC it slightly lags in CPU power, but is $223 cheaper. Also has CPU upgrade potential and the 2x 2.5" drive slots.

However the NUC has it beat in the compact footprint department: