Been running fine for years. Stopped. Would partially open but not show albums, whirling logo, then crash. Generated report, sent to Apple several times. Tried trashing Roon program, re-downloading, reinstalling. Did this twice. Now won’t start up at all. Tries to start, then crashes.

Before this happened, I ran Roon 24/7. It would occasionally stop, but then I just restarted it. Never crashed like this.

When you trashed Roon did you just remove the application or also the files in the user Library? Roon stores its Cache, Database, Settings, etc there, it may be the source of corruption that initiated the problem.

Warrning: If you do delete the Database it will need to be restored from a backup otherwise it’s like starting from scratch with Roon.

Just the application. My music files are in one folder on the Mac, so maybe I shud delete the files in the user library, reload Roon and let it recreate the database?

Deleting the files in the user Library will require either letting Room recreate the database or it can be restored from a backup.

I have over 30k tracks in my local library, I’m a bit overcautious and have my music library backed up in 3 locations and have Roon backup the database twice a day in separate locations.

Look in your Library directory – hold down option key while you selecting Go in Finder. You’ll see the following directories associated with Roon. All of these may need to be removed. 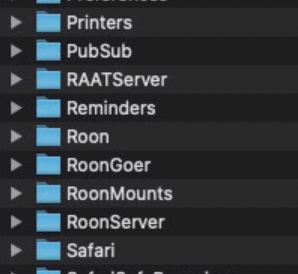 Hey @Fred_Smith we’re so sorry that it took us a while to respond, it certainly was not our intention! We appreciate you reaching out to us as soon as you encountered this.

We wanted to check in and see if you were able to find a solution? If not, please let us know - we’d be happy to continue the conversation!

My apologies. I replied but I think it was through email without signing in. My bad!

So, yes, problem solved. Not directly through the advice, but it helped. A corrupt database had to be the issue and rather than trying to fix it, I replaced the hard drive and did a fresh install. I had actually purchased a new 2 Tb Samsung 870 EVO SSD, and was trying to make sure my Roon and music files were backed up when the crashing issue occurred.

My 1 Tb HD was almost full (Roon backups were no doubt contributing to this) so that likely was causing database corruption and some other strange operating issues and periodic crashes. I know with Windows you need a fair bit of free space on a HD or you start experiencing issues, so I suspect that is the same with a Mac. I also had a lot of legacy software from using iTunes, then Bitstream, DSDMaster, Audiovarna, and a few other programs to play music, so I wanted to strip all those and just load minimum software.

Anyway, backed up my music file, installed the new SSD, reinstalled the Mac High Sierra OS (not easy but that’s another story), copied the music folder, downloaded Roon and let Roon go to work. Went into Mac settings and turned off any sort of automatic updates or notices of updates. Got rid of Avast antivirus which periodically seemed to stop Roon to ask some sort of inane question or try to sell an upgrade, and installed BitDefender which I have been using on all my Windows computers with no issues.