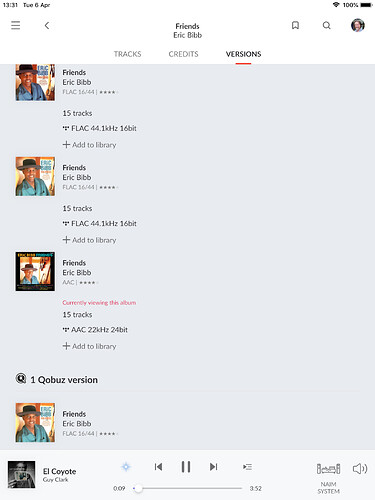 Roon focuses on the highest res versions in discographies etc but it erroneously treats AAC 24 bit as the higher resolution.

Thanks for the feedback here, @Sloop_John_B – I’ll pass this along to the team. Are you seeing this in other places besides this album?

Yes, I’ve seen it in several places, I have added one or two of them only to have to remove and choose the CD quality one.

What’s with the 22kHz sample rate shown for AAC?

I’ve no idea, I’d just like Roon to default to flac or other lossless codecs first which it doesn’t seem to be doing here.

Any update on this @dylan ?

I’m getting AACs in daily mixes when there are flac versions available.

I have an irrational dislike of that yellow dot!

What’s with the 22kHz sample rate shown for AAC?

This reminds me of:

But since the latest signal path shows 44.1kHz, it is correct.

HI @Sloop_John_B, I’ll check in with the team on this and follow up when I have their feedback. Thanks!