Really hope for a seamless integration - as this would be a giant leap forward for overal sound quality. 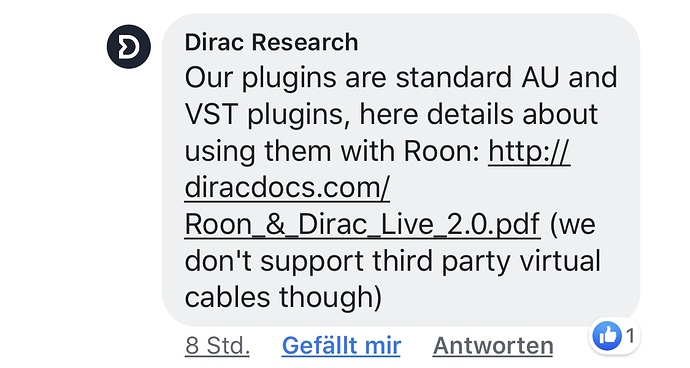 So this is coming out in October?

Has anyone tried with the very latest versions how things are evolving?

Roon already has a powerful convolution engine. You just need something like Acourate to build the filters.

One could even create a standard convolution filter by playing a single impulse through the Dirac correction you’ve made and recording the output via a virtual audio cable. Trimming it to a suitable file size (32768 or 65536 per channel should do) with the recorded waveform (untouched!) in the middle somewhere. The resultant stereo wav can be used directly in Roon’s convolution engine.
According to this thread Near-field Room correction and crossover in Roon by @KMan the result is very good.
This is admittedly advanced stuff, but it is absolutely possible to do.

I found Audiolens a bit easier to use than Acourate (though not as simple as Dirac) but you need a recording interface (Like RME or Lynx) that supports simultaneous playback and recording using ASIO for best results.

If you have Dirac plugin for Jriver, and a multi-client ASIO driver (such as one from RME, Lynx, Stienberg), you can use REW to do a loop-back (ASIO line-in) measurement via Jriver.

Here is an example for Lynx Hilo, you can do this with RME or similar too

The above looks more complicated than it is. It is intuitive once you know how to use the mixer

Hi @KMan
Does this mean Dirac output can not be captured properly with a standard virtual sound card like VAC or Rouge Amoeba?

It could be, I was providing an alternate option which is less finicky

Yes, however you mention RME and Lynx. Only a few have these installed. I use Audiolense myself and have no experience with Dirac, but your method is very good for using a Dirac correction in Roon. I actually did a similar thing many years ago to use a Tact RCS2.0 correction with Brutefir.

According to Dirac, they use Mixed Phase, which will be needed to do time domain correction. If it is strictly FIR based, you can use a Dirac delta in a wave file like you have shown. If a combination of FIR and IIR filters are used (which maybe useful to keep the FIR filter short and use IIR for low frequency correction) then you may have to apply some windowing and use relatively long recording. Alternately sub-band filtering may have been employed. It is hard to say and safer to use relatively long recording and then apply a window.

I mentioned RME and Lynx as I have experience using both but any recording interface with a multi-client ASIO driver and software mixer would be an option. Using virtual cables is also a good option as long as one is careful to make sure there were no stutters during the sweep measurements and sample rates are consistent throughout the chain.

Interesting but still no easy way to use it with Roon

Yes really would love - as so many too - a simpler solution for integration.

How long is a ‘relatively long recording’ in this context? Can you elaborate a bit on ‘windowing’?
I have read somewhere (a long time ago) that Dirac uses a combination of IIR and FIR for corrections. Probably one of the main reasons for lack of export of the filter for use in ordinary convolvers.

I have read somewhere (a long time ago) that Dirac uses a combination of IIR and FIR for corrections. Probably one of the main reasons for lack of export of the filter for use in ordinary convolvers.

If the impulse response is long enough IIR filters can well be implemented as a FIR.
See example below for a 6dB dip at 60Hz, Q=10 (typically to limit a room mode at this frequency):

IIR (target) in blue / FIR filter of 0,1s length in red --> IIR filter is not well modelled in FIR

IIR filters can be implemented correctly with a FIR filter via convolution, at the expense of a long filter so more computer intensive than a standard recursive implementation. But computing power is cheap today.