Before I start, I KNOW this problem is almost certainly arising as a consequence of the complexity of my wifi network. So folks at Roon, PLEASE don’t waste time on this, unless you HAVE time. IMO supporting 1.3 is way, way out in front of this as a support priority. Maybe someone in the community can help…

OK. Please see below a diagram of my home network, as it applies to Roon. With its repeater and media bridge, it’s more complicated than I’d like it to be. But everything is where it is for a reason. It may look a mess, but it’s a planned mess. 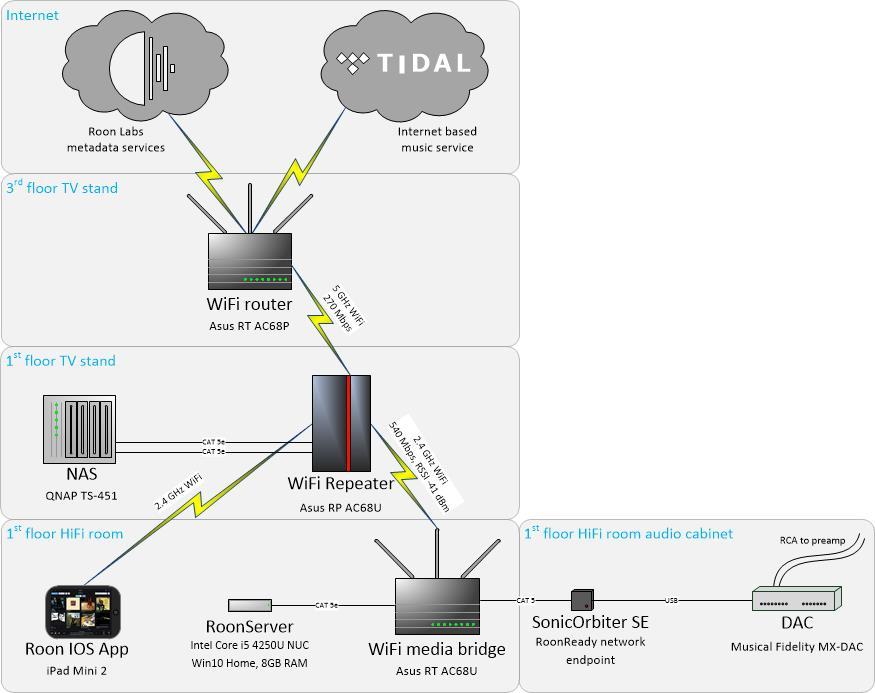 My problem is that on my iPad Roon app, discovery works perfectly (the app can find the RoonServer), as long as the wifi connection is over one of the wifi networks handled by the repeater, the Asus RP AC68U. But if I move out of range of the repeater, and into range of the networks handled by the router - an Asus RT AC68P - the iPad Roon app can no longer find the RoonServer.

Anyone have any idea why?

The router (Asus RT AC68P) can ping the RoonServer NUC, so traffic is traversing the repeater (Asus RP AC68U) and the Media Bridge (Asus RT AC68U). In fact, I can use a port scanner on the iPad, while connected to one of the router’s wifi networks (one the Roon app cannot discover the NUC from), and successfully detect a lot of open ports on the RoonServer NUC. So discover should work.

And just to add fuel to the fire, I understand that Roon discovery is done with UDP port 9003. Well, I can’t detect that port in a scan from the iPad, no matter what wifi network the iPad is on. So I’m at a loss as to how the RoonApp is even finding the RoonServer at all.

Thoughts anyone? Here’s where I need to insert a “scratching head” emoji.

A couple of off the top of my head thoughts…

I"m sure you thought of things, but I’ll repeat the basics.

Brian has been pushing mesh network as the best solution for a WiFi enabled Roon setup. have you looked into that.

Have you confirmed the issue is specific to the iPad/IOS by trying a different device (Windows laptop, iPhone etc)?

Short anwser: no.
I don’t have any such device available to me. My wife’s got a work laptop that I do not touch. And other than the iPad, and the NUC that has the RoonServer, nothing else can run Roon.[quote=“Wakajazz, post:2, topic:21328”]
You mentioned “I can use a port scanner on the iPad, while connected to one of the router’s wifi networks”. Is the router WiFi network the iPad connects to on the same subnet that the NUC is on? I recall reading that Roon is unable to be discovered across different subnets(?)
[/quote]
Well, that my be the root of the issue. Technically I’m not subnetting. It’s all subnet mask 255.255.255.0. But - and this may be an important but - the two different wifi networks are indeed just that… two different wifi networks. That repeater is not an access point, which would use the same network SSID. The repeater and the router use completely different SSIDs. And it’s my fear that this is the root of the problem.

I"m sure you thought of things, but I’ll repeat the basics.

Daniel, when you’ve got no clue, I think square one is a great place to start.

Is there a firewall between the two?

No. But see my reply to Wakajazz about different wifi networks.

Have you verified that the ports are not blocked?

I’ve turned off the Windows firewall on the NUC. Not sure what else there is to do there.

Verified that the iPad is not getting a new Ip on a different subnet.

See my reply to Wakajazz about subnetting.

Brian has been pushing mesh network as the best solution for a WiFi enabled Roon setup. have you looked into that.

Yeah, I’m sure that’s ultimately the best solution. But SOHO mesh networks are fairly new. I’d rather give it a few years to mature before a rip-out-and-replace.

@Rugby - as I recall - a few months back you were trying to assist me with a problem I was having with Roon dropouts. The logical assumption being - naturally - could easily be a network issue. Thanks for that help. I found it. But it took weeks, and more hours than I’m willing to admit, to find it.

After making some network improvements - to no avail - and then proving the networks was quite sound, I found the answer. It was a loose pug on the back of my DAC! Actually it was an adapter tip on the business end of my SBooster replacement power supply. I mean, that’s right up there with people calling tech support about their PC not working, and the phone support person telling them to make sure it’s plugged in. And being right!

Tonnes of time wasted on a stupid mistake.

Thanks for trying to help though.

Well… a total reinstall of Windows and RoonServer made it all go away. Not solved, obviously. Would love to know what was wrong. But fixed. I can now connect the iPad app from any wifi network in the house.

Different SSIDs shouldn’t really matter.
Any chance you have more than one device acting as DHCP server? Or you’re getting a different IP address as you move?
Do your logs show anything at the point you can’t connect?

I think sometimes if your DHCP server is unavailable when you change network, or restart one of the other routers or computers, things can go a bit weird. Then you probably need to restart whatever’s running the DHCP server first, then the others once it’s up.

Or set a manual IP for your iPad, and if you haven’t already, your other computers too.