Roon does not see Apple TV's

Roon has only seen my Apple TVs once since June. iTunes sees them and plays to them without trouble. Turning the Apple TVs on does not make Roon see them.

Am hoping next major software update will fix this.

Am hoping next major software update will fix this.

Build 88 is now live, with a number of Airplay fixes!

Thanks for letting me know.

Unfortunately, Roon still doesn’t see Apple TV’s after the update as per screenshot. Is there a set up for the new version I need to do? 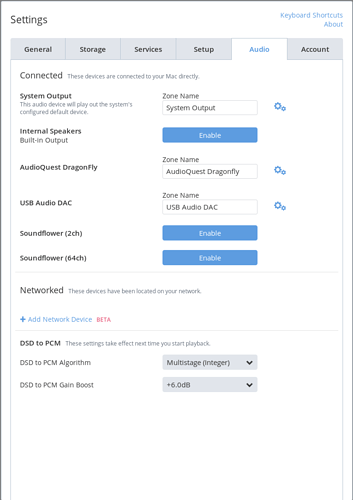 Curious to know how if you got that fixed.

No. The recent update didn’t fix it.

FYI, as I mentioned in a separate thread, Build 88 (64bit) cannot see my ATV3, although it can happily see ATV2 and Airport Express on the same network. I’ve tried restarting everything, renegotiating DHCP, everything. iTunes quite happily sees all devices. The missing ATV3 doesn’t show up by name in any of the Roon logs.

Thanks for helping! -Paul