Roon does not stop detecting tracks

Normally, whenever I want to import a new album, I force a scan. The album is soon imported and after a little while Roon stops detecting tracks (flashing circle, top right).
Recently, however, I tried to import a 6ch album that I can play 2ch stereo with HQPlayer.
The album is:
Andris Nelsons, BSO - Wagner Overture Tannhauser , Sibelius Symph 2 (2014, 24-96)

Roon was NOT able to import and from that moment on the flashing circle never stopped working.
After a couple of days I converted the above album to 2ch stereo and removed the multi-channel version from my NAS.
Roon imported the album immediately. However, the flashing circle is still working.
I do not know if this is due to my original attempt to import the multi-channel album, but it seems as if the album is still in a temporary database and Roon tries to detect it and ends up in a loop.

I stop/start the server, but Roon is stuck working, trying to import files. It is obviously rather annoying.

Is there anything I can do?
Is there a way to reset Roon “internal history”?

Run database cleanup in settings. See if that helps.

Thanks for your reply.
Unfortunately, it didn’t.

Roon continues to be “active”.

If you click on the spinning circle, a dialogue box appears.
Can you screen shot and paste that in here ?

Can press on the spinning circle press take a screenshot of the appeared pop-up and paste it here, thanks.

I have a similar problem. My spinner has been going non-stop since 1.2. I sent the details to the team but there has been no further communication about it, so I guess there is no solution.

I also have multichannel files which are mentioned in the logs, but I was told that was not the problem.

Here is the screenshot: 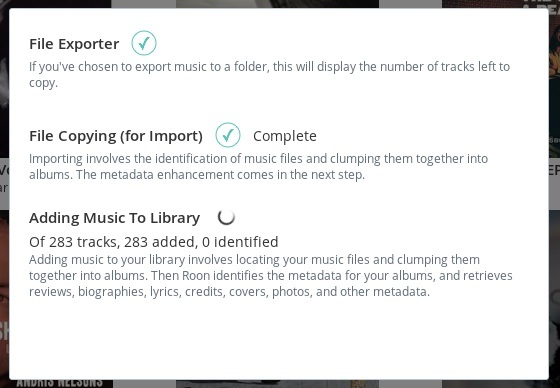 Hi @bibo01 ----- Thank you for your feedback and I apologize for the inconvenience. While I try to narrow down what could be going on here, I wanted to ask you very quickly if rebooting your “core” machine has yielded any different results, in regard to the issue(s) being highlighted above. Your input is greatly valued, thanks!

I had tried to reboot my core machine with no difference before.
I just tried again now, but I still get the same system behavior and, if I click on the spinning circle, the same message.

I do not know if it has a direct relevance, but adding a new album with 14 tracks has elevated the bottom count to 297: 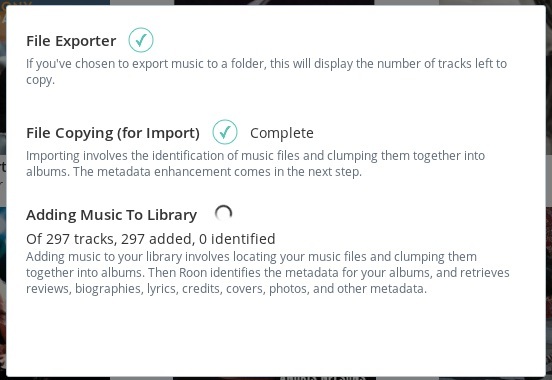 Does that “0 Identified” mean that something has happened (possibly trying to add a multi-ch album) and from that moment on Roon cannot identifiy the metadata and retrieve extra material??

EDIT: indeed, all the more recent acquired albums have no artist’s biography, etc… This IS a bother if it cannot be fixed!

Question -
When an update to Roon Core is available, will it stop this problem? Kind of reset the database?
Otherwise I keep accumulating new albums that do NOT have info and no cross referencing.

It looks like you are no communicating with the web database. Anything showing in your firewall settings ?

Firewall settings?!
I doubt it - I haven’t touched or updated my Linux server in weeks.
As reported, that multi-channel album has triggered a “hiccup” in Roon and now all new albums are simply put in the database. Before it was fine.
Would it be a good idea to try reinstalling Roon Server?

Would you mind to share Roon logs with us ? I’ll contact you via PM with more details.