Roon doesn't import all files that it scans

Using Roon ROCK, when I select my music file folder on the NAS Roon scans 7410 files but only imports 3119 of them missing many artists entirely. When I use the MAcBook Pro as core it scans 7425 files and imports 6568 of them. How do I get all of the scanned files to import. They were there at one time. I prefer NOY to use MacBook as the core - that is why I bought the NUC unit.

If music isn’t showing up in Roon, first try to force a rescan of your folder from the Storage tab of Settings.

Rescan misses them again. Does not explain why using one core (MacBook Pro) produces twice as many files as the other (NUC ROCK)

You may also want to check the list of the Skipped Files , which can be found in the Library section of Settings.

If that doesn’t work, the following describes some reasons why music in your watched folder might fail to import:

All files are in FLAC format

Songs not imported are listed in the file directory the same way as songs that are imported. Also does not explain why different cores import a different set of songs.

Skipped files are in the 25-35 MB range and will play from the directory using another file player.

Only special characters in file and folder names are forward slash. Does not explain why different cores import a different set of songs.

None of this applies. Also does not explain why different cores import a different set of songs.

What does it mean that a track is “unavailable” in red?

Still Having Trouble? Let us know

Still having trouble with inconsistency between multiple imports with the same core and different imports with different cores. Searches for artists give a busy icon and no result.

Still can’t find your file? We’d be happy to look into the issue further, starting by looking at the media.

Please upload a file that’s missing to Dropbox (or similar) and send details about your setup and a link to the file over to Roon Support so we can investigate further.

Please help me first understand why different cores get different results. With 3200 files that import and about that many that don’t it is difficult to find one that consistently does not import. It is difficult to compare the files on NAS with the imported files because Roon sorts them in a different order than they are on disk.*

Only special characters in file and folder names are forward slash. Does not explain why different cores import a different set of songs.

I suspect this is the cause of much of your problems. Rock is Linux based, and so won’t like forward slash in filenames.

Not much, because not many tracks are so affected. One example, the artist “JerryGarcia/David Grisman” shows in Tracks for the album “Shady Grove”, however, on my NAS the artist is given a “David Grisman”, the album is listed as Shady Grove, and the songs are listed such as “01 Jerry Garcia - Shady Grove.flac”. The NAS did not put the “/” there, Roon did.

Roon does not use the folder or file names to identify albums, artists, or tracks (with some subtle exceptions related to multidisc albums). What you see for albums/artists/tracks on Roon is whatever Roon inferred by matching the files in your collection to the metadata it has access to, with the help of any ID3 tags on the tracks in your collections.

My comment about forward slash pertained to the file system names, not Roon’s. I had perhaps misunderstood you, but you did say folder names.

On your other points, it sounds as though Roon has identified some of your albums, and not others.
Do you see that in Album View?
When it does, it can replace your metadata with its own, e.g. two primary artists on Shady Grove rather then your solitary Jerry Garcia. If it can’t, then you are reliant on your own metadata to tell Roon that Annie Moses for example is a contributing artist.

You may find Roon’s User Guide helpful in organising your metadata.

EDIT I see @Fernando_Pereira has already answered. Thank you

I’m regretting a lifetime subscription to Roon right now. Auralic Lightning has no problem finding all of my music on the NAS and can search Tidal on an artist names and bring back the albums in seconds. Roon plays the “spinning wheel - got to go round” icon and doesn’t return anything. Roon finds 5,000 out of 8000 tracks on a MacBook core and 3,000 out of 7,000 tracks using a ROCK core. All 7,000 tracks are sitting there in one folder on the NAS.

I guess I get to learn about metadata databases now just to get Roon to recognise what is sitting right in front of it. I bought the marketing hype that it would simplify and expand my listening experience. The only thing expanding is my frustration with Roon and Roon ROCK cores and …

I don’t know what or where my metadata is. I have no idea how to get Roon to simply give me access to all of the properly named and organized valid FLAC files in a single watched folder.

From the user guide…

When you set up a watched folder, Roon will scan the folder and add any music it finds to your library without moving or changing the files at all. Roon will also monitor the folder for changes, so any music you add later will automatically be imported.

NO IT WILL NOT. Well, maybe it WILL add any music it finds, but it won’t find it all and it will find different music with different cores. IS there a core that works?

In SETTINGS>LIBRARY>IMPORT SETTINGS I changed the default “Prefer Roon” to “Prefer File” and it may be finding them. It is proceeding slowly.

Don’t give up now! You’ll get there in the end. Roon should do most stuff automatically, but sometimes needs a little help if you want it to behave just so.

The reason things are going slowly right now is because Roon is busy analysing your music, see here, which also explains how you can tell it to hold off a bit.

On the point about why a number of your files are not being imported, I don’t have an answer if my suggestion above is wrong. So let’s get the professionals in - @support

Apologies for the frustrations here and thank you for reaching out to us regarding this issue.

Having special characters in the file/folder names is something to be aware of, but since you mentioned that your files/folders are not using these and it is the Roon metadata itself, I believe something else may be going on here.

Can I please ask you to share a screenshot of your ROCK’s Web UI page? You can upload screenshots to this Community site by following these instructions.

As a follow-up step, I have gone ahead and enabled diagnostics mode for your account and what this action will do is next time your Core is active, a set of logs will automatically be generated and uploaded to our servers for analysis.

In addition to diagnostics, we can try to see if starting with a fresh database will help. To do so please use the following instructions:

Can you give those instructions a try and let me know if it helps with the import issue?

Thanks for helping me. Screenshot of Web UI attached… 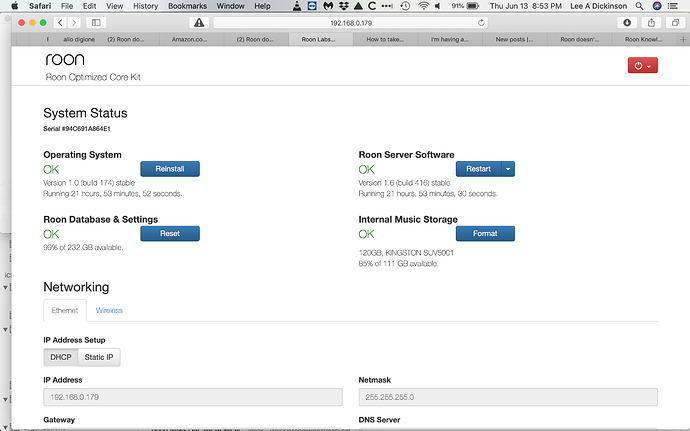 I will try to regenerate the database now

All of this was done…

A day later, STILL at 1261 tracks added. With the whirling icon in the upper right corner.

Thanks for giving those instructions a try. While looking at the logs from your ROCK machine, we noticed strange behavior during the importing of your “Lossless” folder.

The QA team is requesting that you disable this folder and let us know if you see any changes in the behavior you are reporting. Can you give that a try when possible?

That is the only place I have music files except the drive on the NUC that I use for my HiRes files. I disabled LOSSLESS and Roon still says it is adding music to the library, but it is not.

Two days - same place. Do I reboot? What do I do for music with my music directory disabled. Do I need to copy the music files to a different location and try to point to it?

Can you perhaps share a screenshot of your “Activity Spinner”? This is what the activity spinner should look like and it is located in the top right-hand corner of Roon: 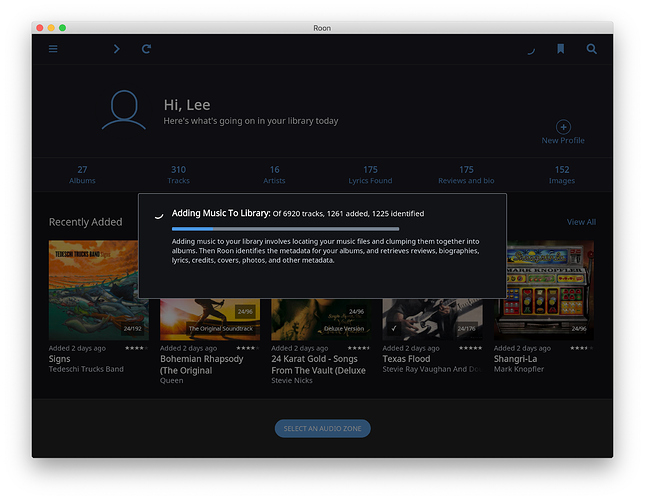 I can do that, and I will test it, but I’d really like to use my Synology NAS for the music because I have other systems using it as well. It is supposed to be able to use NAS storage.