Roon doesn't keep track of what Linn DSM is playing

As far as I understood Roon Support was not able to reproduce this problem but the problem appears for some of the Linn users.

I had two major changes in my setup since I’ve last seen this issue.

I upgraded my Akurate DS/1 to /DS3 and I replaced my router with a router which is able to assign static ip addresses via DHCP. No idea if one of those changes made the problem disappear.

@papa.jay, thx for pointing me to the other thread.
The Klimax actually is DSM/3.
So you have assigned a static IP to the Linn?

So you have assigned a static IP to the Linn?

Exactly. The only way to do this is via DHCP because you cannot enter a static ip address in the Linn Konfig tool.

This was the reason I was looking for a router which is able to assign static DHCP address to the Sonos gear. When I was able to do that I also provided a static IP for the Linn equipment.

Due to the fact that I never got an error message (like for my Sonos equipment) I doubt that assigning the fixed IP solves the problem. But who knows…

Does this behavior seem to happen with any specific content (TIDAL, certain files, etc.)? If you go back and play the same track again will it always occur again?

Does this behavior occur for all remotes?

Hi, I have the problem with Roon not finding my Klimax when I switch it off and then on as described here: Linn Klimax DS not showing up after PC wakeup. However, once I restart Roon Server the Klimax comes back with the queue intact down to the song played and the position in that song. Therefore, at least in my case these two issues are not linked.

Does this behavior seem to happen with any specific content

No, seems randomly, see gif – you can see where playhead start and where it doesn’t (music starting every time).

Can’t say anything about Tidal because I don’t use it.

If you go back and play the same track again will it always occur again?

No, see gif, random behaviour with those 3 tracks.

Does this behavior occur for all remotes?

(thx for pointing me there, @papa.jay).

I hate to say it, I’m on my last day of the trial, but these to things (playlist stopping, no playhead) both are kinda dealbreakers to me … they spoil the experience pretty much.

So … any idea appreciated!

Can you verify how the Linn device is connected to the network? Are there any switches involved in your networking setup?

I’d like to get some additional information about this behavior:

yeah, I’ll be in in helping to find what that is.
Feel free to enable diagnostics on my account for now.
I’ll try to reproduce it and keep you updated.

I’ve had an encounter today, it seems both issues are related. Here’s what happend (see the screenshots attached):

2018-12-08, 16:47 (CET): Brad Mehldau, 1st Track started after fresh start of the remote. Core started just before by logging in on the core Macbook (before, another user was logged in).
Playhead stuck: 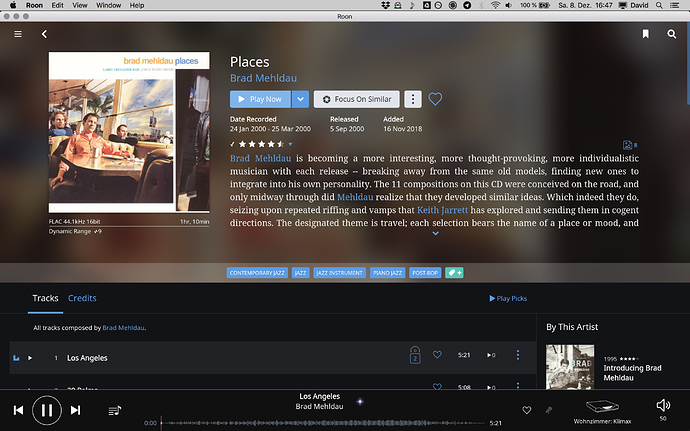 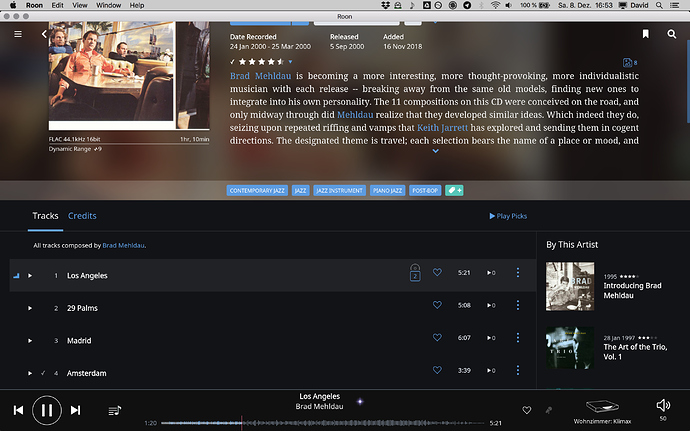 (On stella core for this zone, there’s the same state, also on the Android remote): 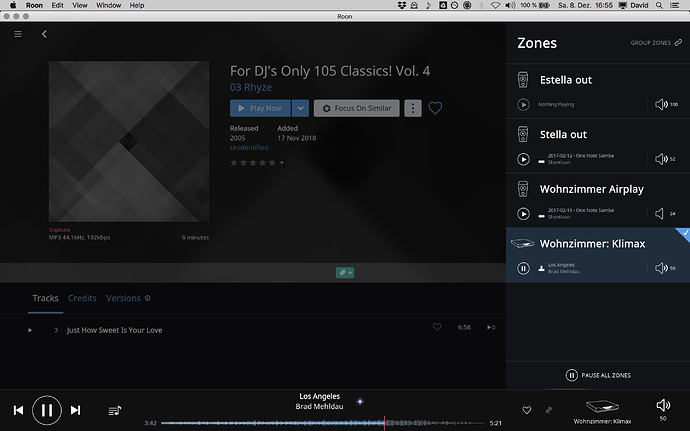 16:59: Nothing Playing. Track 2 was the last. Seems it has not quite finished playing. Track 1 peak meters animated, playhead not moving. 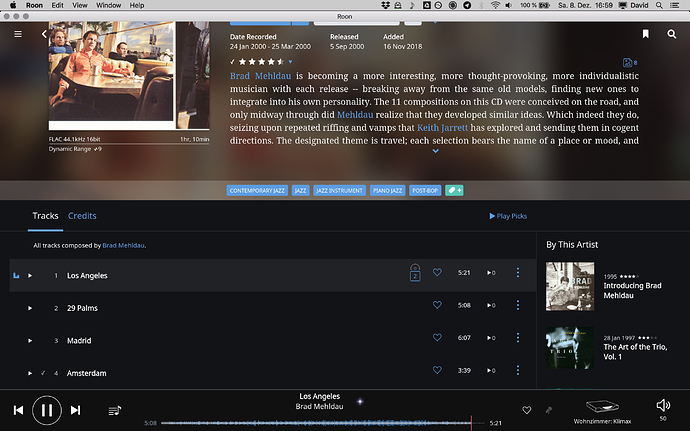 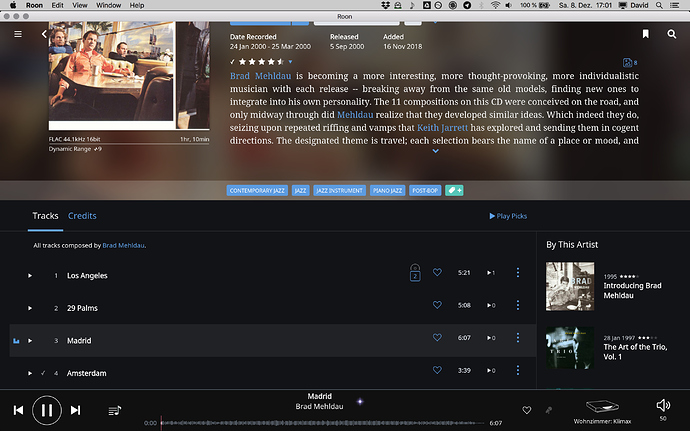 17:02 Restarted Roon Core on Stella. Waited on estella for core to be ready. Started Track3 > nor everythings’s as expected. 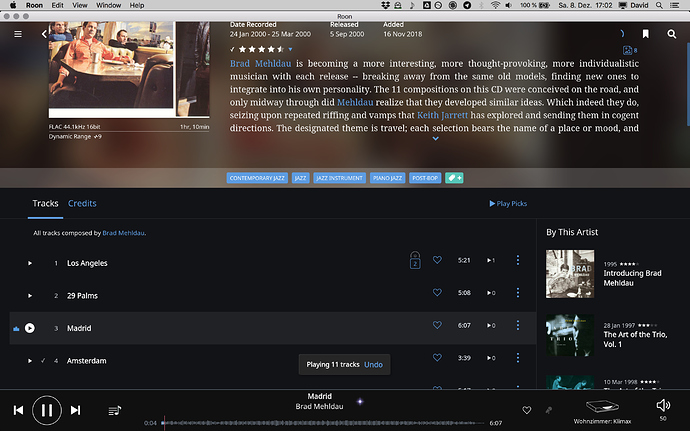 Setup as described in the beginning of this thread.

How often does this behavior occur?

Once in a while, irregularly.

Don’t think so, see above – recovery.

Have you noticed any patterns as to what causes this behavior? Specific types of content (Switching from one sample rate to another, etc)?

Have you noticed this behavior with any other endpoints?

Not yet, but actually I just use my Linn Klimax for now.

If you use another remote device to connect during this time do you see the same behavior?

Yes, see above. Same on all remotes so far.

Can you confirm that the firmware on the Linn is fully up to date? 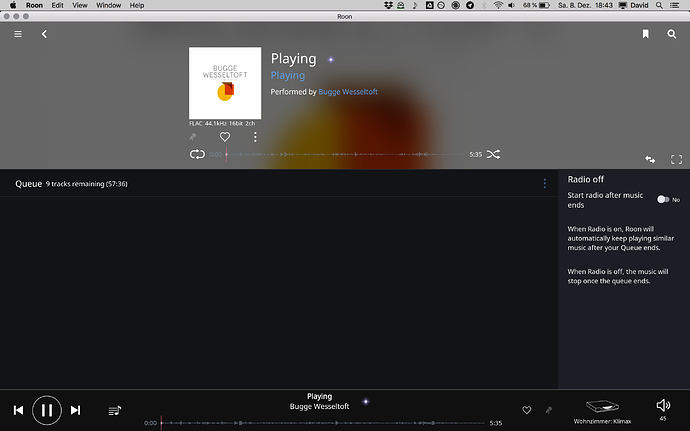 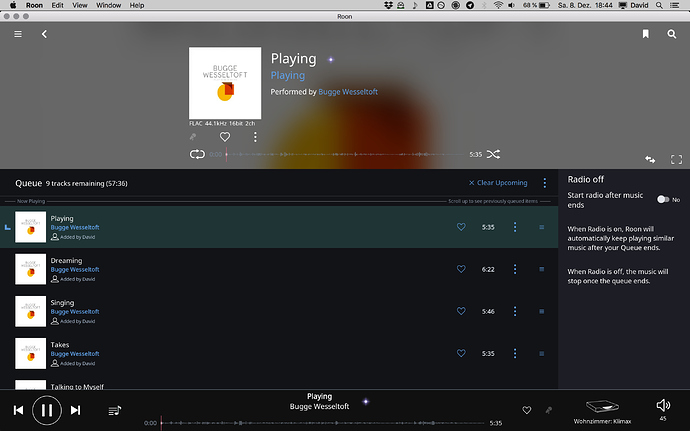 Thank you for the detailed information here! Now that I have the timestamps, diagnostics have been enabled on your account. The next time your Core is active a diagnostics report will automatically be generated and uploaded directly to our servers

Update — The diagnostics report has been received.

Can confirm the same problem on my DSM3 as well. Was working fine in the past now seems no tracks are updating progress.

Hi @dylan,
du you have any news on this topic?

We continue to investigate the behavior you are reporting, including testing across different networks as well as different devices. In your setup, has this issue been limited to the Klimax DSM, or have you seen this behavior with the Majik DS as well?

yep, also on Majik. Server restart doesn’t fix it.
Thing is I’m running out of trial (and the playlist stuck thing is a nuisance), that’s why I’m asking about the current state of things …

I upgraded my Akurate DS/1 to /DS3 and I replaced my router with a router which is able to assign static ip addresses via DHCP. No idea if one of those changes made the problem disappear.

New years eve, several hours hours of playing music. Playlist stuck, no playhead syndrome is pretty much standard roon behaviour with nearly every track played, despite turning on and off Klimax, Core, Remote. Close to unusable.

I can confirm that I do experience the very same problem with my Linn Selekt DSM. It is strange though, that a few weeks ago, when I had another Linn Selekt DSM at home for testing in the same configuration, no such problem occurred.

Well, that same “Selekt DSM” might have had a totally different version of the Davaar Firmware installed.

Use Konfig from Linn Downloads to check which version you have on yours.