Roon doesn't play album while Qobuz and Sonos do

I was searching for the album “American Dream” from Diamante (released in May 2021):

First, I searched directly in Roon. The album showed up, but when I clicked it nothing showed up (black screen, “album not available”).
Next I opened the Qobuz desktop app, found the album and added it to my favorites.
After syncing Roon with Qobuz manually the album showed up in Roon with all the tracks. However, above each track it says “not available”.
So back to the Qobuz desktop app. I clicked play on the first song and the music started to play without any problems.
Next, I opened up the Sonos app and searched for the album in Qobuz. It showed up and here I was also able to play the album.

My question is: why not in Roon? If it’s available (and playable) in Qobuz (or Tidal) it should also play in Roon. Why does it differ?

Strange indeed. I’ve had this album in my library from Qobuz and Tidal.

After reading your post, I went to search and they’ve now both gone from my library.

Added it again from Tidal and Qobuz and only the latter now appears, with all tracks marked as “unavailable”. No “versions” tab either.

Both Tidal and Qobuz native apps play it without issues.

Based on my very little knowledge, the only explanation I could offer is that this release has just been replaced on both streaming services and the sync has not completed yet.

Could well be it @RBO .
It was in my library too.
This is what I see now when I search.
But when you click on any of the tracks from American Dream it says album unavailable.

Cheers Kevin. Curious what’s going on with this release.

The streaming rights for this album expired on 5th January.

And that’s why I still buy physical media😎

Quit rubbing it in old man

Right. Some of my physical media “expired” at the hands of my kids.

Qobuz streaming rights. Are you sure you can play more than 30 seconds in the Qobuz app?

The whole album plays fine in the Qobuz app 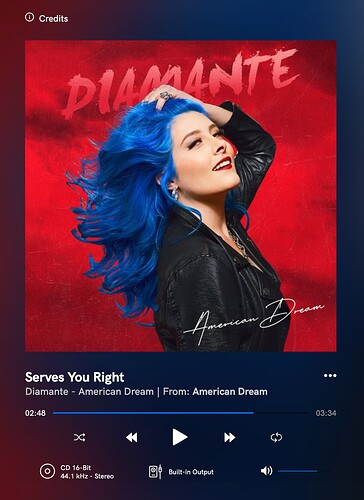 Okay, thanks guys, I’ll raise this with Qobuz tomorrow.

There’s still the issue of it being unavailable in Roon via Tidal.

Well, either there was an error, or there was some unfortunate timing with regard to streaming licensing renewal (for both TIDAL and Qobuz). Give it 24 hrs and I think that you’ll be able to stream American Dream again.