Every album that has a MB entry as well as an Allmusic/etc entry. This Haydn album was chosen as an example, because I recently edited it on the MB side and am aware of it. 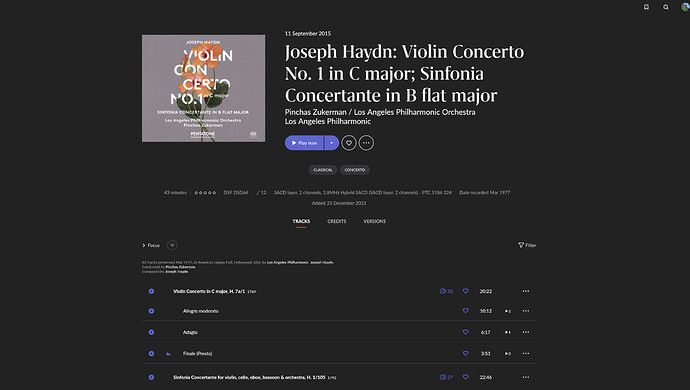 Album metadata sourced from Musicbrainz for the same album lacks this information, despite it being present in the Musicbrainz metadata as per the official Musicbrainz Classical Music metadata format - Composers/writers come first, are separated from performers by a semicolon, and Roon should be able to parse this standard format. 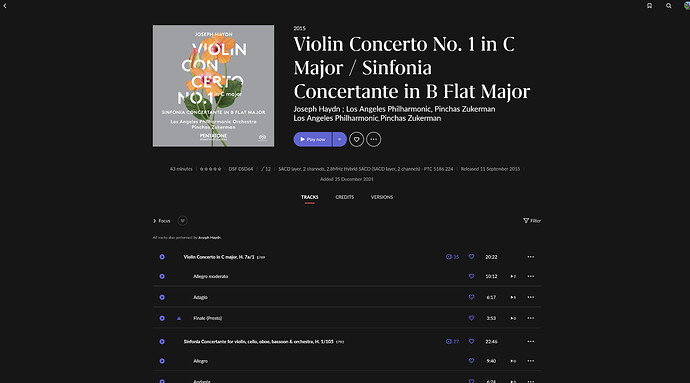 And the release matching screen showing the Allmusic/etc entry on top, and the MB entry on the bottom, for the same album:

It seems to me that Roon should be able to track the published Musicbrainz formatting guidelines and extract at least basic metadata correctly for them. More info could be extrapolated by parsing Track and Release relationships, of course - but correctly parsing the release artist list and splitting on semicolons to separate composers from performers would be the baseline.

Roon should generally parse MB metadata content according to the published official style guides, and then the community can fix MB metadata that is not following the official style guides to get it to show up correctly in Roon - if Roon does not parse MB content according to the official MB style guide in the first place, but with some other ruleset, then it’s a lose-lose for both Roon and MB - Roon doesn’t get accurate metadata to consume, and MB doesn’t get corrected metadata in the first place.

Thank you for bringing this to our attention. As always, we appreciate the heads up here. We’ll take a look at the metadata handling and see what we can do.

Please understand that our metadata improvement efforts are focused on system wide fixes. We don’t have the ability to jump into the metadata and make prescriptive changes. The information belongs to our metadata providers and we have to coordinate with them. Because of this, making a manual edit to the album in your Roon library is often the quickest, most effective, way to address these small metadata annoyances.

Thanks, and I totally get that - and I’m not asking for a metadata fix for this specific album - the album metadata is correct, according to the MusicBrainz official metadata style guide.

My expectation is that if the metadata source Roon pulls from is incorrect, that I go fix the metadata in that source by making edits - I certainly don’t expect Roon employees to go do that.

My concern is that in parsing the MusicBrainz metadata, Roon does not seem to be following the published MusicBrainz official metadata style guide - at least for classical music. If it is not, that’s a general problem, because that means even if I edit the metadata correctly as per standards in the source, it won’t ever show up in Roon properly.

This is something we intend to look at, but be aware that MusicBrainz doesn’t actually have flag saying that a release is Classical and that the Classical Style Guidelines have been followed. If it did, this thread probably wouldn’t exist.

There are some easy releases to figure out as Classical, but detecting everything without false positives is not straightforward. Also, the last time I looked (admittedly a while ago) there were plenty of examples where submitters had not followed the style guidelines properly.

This is something we intend to look at, but be aware that MusicBrainz doesn’t actually have flag saying that a release is Classical and that the Classical Style Guidelines have been followed. If it did, this thread probably wouldn’t exist. There are some easy releases to figure out as Classical, but detecting everything without false positives is not straightforward.

Fair enough, I understand how that would make it difficult. Thanks for putting it in the backlog!

Also, the last time I looked (admittedly a while ago) there were plenty of examples where submitters had not followed the style guidelines properly.

Sure - that’s a never-ending battle - but when you’re pulling from a community data store like MusicBrainz, it’s going to be better for everyone (including the community data store) if Roon’s ingestion strictly tracks published style guides as much as possible - and directs people complaining about releases not showing up correctly to the official style guide and MusicBrainz and says “Roon follows their published style guides - this release in their database doesn’t follow their style guides - go fix it with them so that it does and it’ll look better”

As a user, that attitude is perfectly fair to me - it’s not Roon’s problem at that point really, and it incentivizes me to go improve the community data store.

Thank you for pointing out my initial syntax error @Benjamin_Leggett. I intended to say metadata handling but incorrectly spoke in terms of a specific album title. I’ve corrected my mistake above.

Joel is taking another look at this, but as he mentioned there are some issues with ingesting their metadata wholesale. Number one among them is the fact that individuals don’t always follow the style guide when they submit data. We don’t want to simply accept it as is - some reconciliation of the data needs to happen first.

That being said, we do appreciate your help here and welcome you to point out data inconsistencies when you encounter them.