I simply can’t understand how Roon finds the extension?

What folder do I put the unzipped alarm into or is that simply not the key?

I’ve been searching the database here, reading through threads & simple can’t spend all day on this, as clearly I’ve not understood something that is simple for most.

Oh & are there other extensions for Roon? Is there some sort of list hidden away somewhere?

Oh & are there other extensions for Roon? Is there some sort of list hidden away somewhere?

I don’t think extensions are supported in the iPhone app

There is a configuration file, but before editing it you have to stop the extension and then start it again after the change is made. Not very quick either, unless you can somehow script this.

after the song in the playlist ends, it starts playing some other random song

Have you switched the Radio function of Roon off for the zone that you use?

Thank you for the link, hopefully it’s simple enough for me.

However, I’m more than capable of following clear instructions!

As for what extensions I’m looking for, I have no idea what’s out there. I’ve only seen the alarm clock mentioned, which sparked my interest.

Hopefully, I’ll get the time over the weekend to find out how to install it. I think I’ve downloaded all the magic ingredients.

As for what extensions I’m looking for, I have no idea what’s out there

The Wiki, as shared by Nathan, has a Respository page that lists what’s available. I just updated it with the latest addition it’roXs!. There are now 20 extensions to choose from

It has been over a year since the last update but now I got something new for you.

I got a request to add grouped zone support to the Alarm Clock, the issue being that if the output of an alarm is part of a grouped zone then the other outputs of the group don’t adhere to e.g. the fading settings. It took some time to find out how to do it but, as the grouping of zones is a important feature of Roon, I did the necessary refactoring of the code to make it happen.

When setting up an alarm you still select an output (the primary) This should be the output that’s most critical in performing the action (e.g. the one that wakes you). If this output is part of a grouped zone and it is a Play alarm you can set individual volume levels for each output in the group. If you ungroup, the alarm remains working but then only for the primary output. If a fade in or fade out is selected for an output that is part of a group then all outputs of the group will fade. 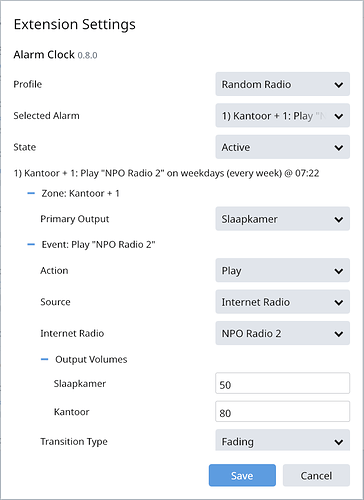 Note: If an output of an alarm became part of a grouped zone after it was set then the current volume levels will be used for the secondary outputs.

As always, feedback is welcome.

How to install / update

The recommended way to install or update is via the Roon Extension Manager.

If the manager has auto update enabled then the changes will be pulled in the next time the update is performed. It is also possible to update manually via the Settings dialog, select the Alarm Clock from the Playback category and perform the update action.

The tagging of the Docker image has changed, this means that this time you have to uninstall first, then update the Extension Repository to v0.3.14 and then re-install (don’t forget to setup the timezone as part of the installation).

Hi Jan and hi to everybody here in this thread,

thank you Jan for your effort and time to establish an alarm clock in roon environment.
Unfortunately I go crazy!! I set up alarm function as described before - everything works fine - the alarm starts at the fixed time for the same day with the fixed volume level.
When I set the alarm function for the following day, the amplifier switches on automatically but the playback doesn’t start.
I have a Mac mini with newest version of Catalina, Zone Player is a Marantz AVR SR7009 connected via Airplay.
Does anyone have a good idea?

If the amplifier switched on then I expect that Roon indicates that playback is active, is this the case? Do you have a different endpoint on which you can test?

Thank you for the quick answer. I tried the same configuration with the Sonos Play 1 in the bathroom this morning and it worked fine. So ist has probably something to do with Marantz.

I am considering to move my Roon setup to ROCK. Is it in the meantime possible to install the alarm extension on the ROCK NUC?

No, Rock does not allow anything else to be installed. You will have to install the extensions on a different PC, or, just leave them where they are if you already have them installed.

I use a NUC ROCK, and have installed the Alarm Clock extension within Docker on a Synology NAS. But although I can create an event via Roon / Extensions on macOS, it doesn’t actually do anything. My KEF LSX speakers are called “Office” in Roon.

Not sure where I have gone wrong … 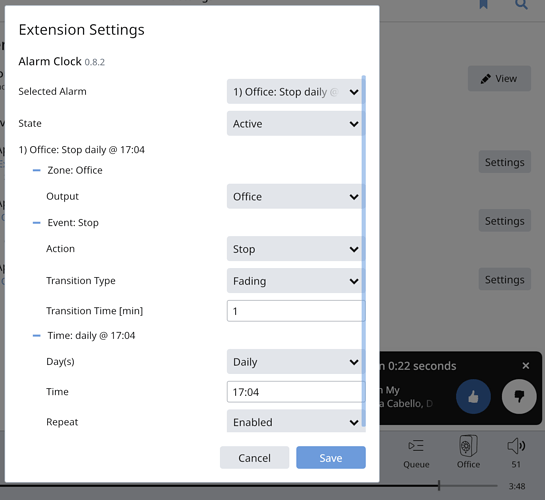 Have you set the TZ environment variable to the timezone you’re in while creating the container?

But I have now … and it works!

Thank you very much!

Hi - I am new to using this extension and trying to have it stop a zone at 7pm each night. This is how I have it setup but is not working: 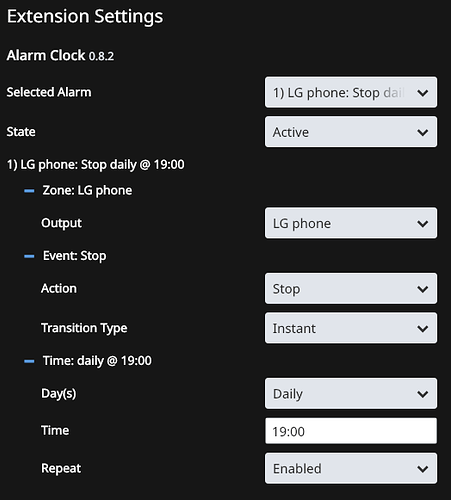 Any thoughts as to what I’m doing wrong? The zone is still playing after 7pm. Thanks.

Wrong time/timezone on the machine running the extension?

That happened to me after moving my core to another machine. Uninstalling that extension and then reinstalling worked.