embarrassed to say I was typing npm . so now node . is working…but I’m still not able to get an auto startup shortcut to work as per above

Would this help you in any way ?

How to automaticly start node scrips in W10 Tinkering

I’m a Happy user of these two Roon extentions. And My Roon core is on a SonicTransporter, so I use a PC for my Extentions. As well as HQPlayer which also starts automatically from a reboot. Can anyone guide me how I can make these extentions automatically start and run in W10 ? Of cause to add the cmd to startup is fairly simple and guides are easily found on the net. The tric is how to automatically add/paste the required text into the different command windows.

Are you sure you actalluy have the correct path. Maybe you have one more folder ?
Can you please browse in your file manager to verify.

If yes, you may start looking if you actually have used the correct startup menu. Add another program to test.

I tried to make my guide “bullet proof” so if there is anything that can be misunderstood in my explanation, please let me know.

Well the same extension works for git but not for the node shortcut. I’m following the same start menu select the cmd and then open location I think it was…I’m in bed now as it’s 2:40 am and trying to see if the fade will work on this API and then in the morning wake me up…then I have to try to make it WAF friendly…that could be a challenge despite my wife being pretty techie when she wants to be.

I have a set wake alarm but how does one choose a play queue to open?

Yes, this is how it works at the moment. In case you forget to preselect something, a track from your play history will be picked. There is some more information about this in the Limitations section in the first post.

Sleep well, I hope your wake alarm isn’t too early

Now how long before we get to see some easier way to have all this built into roon for adding an extension?

Seriously all this git and node install is going to be well outside the capabilities of most roon owners. I consider myself pretty handy with computers and support clients operation, but this was a traumatic episode even for me

Perhaps node . >> null is something better than a scrolling window…I’m trying that now. Seems to be visible in the extensions list still so thats a start.

Haven’t thought about that. Maybe the radio should be a more generic fallback, not only for the case that there is nothing to play. Food for thought…

This is the information the Roon Core provides to the extension. It tells the play state, playing time, active modes etc.

Would it be possible to control Alarm Clock by using iOS workflow ?

(If anyone did the effort)

The functionality to adjust a stop alarm to a track boundary, as described previously, is now available in the v0.5.0 release.
https://community.roonlabs.com/t/roon-extension-alarm-clock-v0-5-0-now-on-github/21556/133

Note: I no longer have the possibility to edit the first post, so I have to find another way to provide up to date information.

@Jan_Koudijs, Small bug… When entering the time lets say the wake up time is 05:30AM under the status of the extension it interprets 5:30AM as 5:20AM. 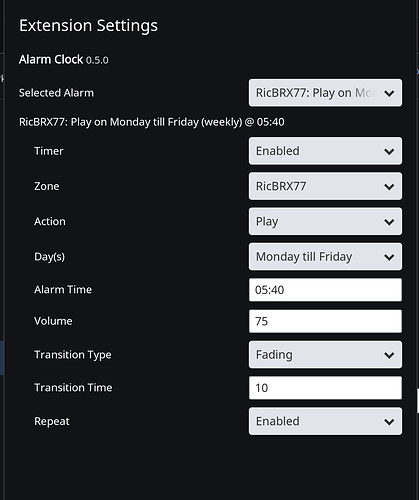 Perhaps it’s indicating the start of the fade time

I thought Fade was measure in seconds not in minutes?
Maybe I just don’t know what it means

@wizardofoz is right. The status screen shows when fading starts, the time you enter is when the set volume is reached. Since this leads to confusion I will align the two in the next release.

The fade time is in minutes, I will add units to make this more clear.

Thanks for the feedback.

@Jan_Koudijs, thank you very much for the alarm extension. One idea for additional functionality would be the ability to reload the queue (using a pre-defined playlist) and play randomly from that. This would allow a “set and forget” alarm that didn’t require priming or resetting the queue after use at other times. Is this something that is technically possible?

This is a great initiative and exactly what I need but I just installed ROCK so what is the best way to install this extension now? Thanks for the support