Roon freezes and has to be restarted [Resolved]

I have recently encountered a problem with Roon and would appreciate any help you can offer.

The problem can be described as a ‘freezing’ of operation. Roon works as normal for an hour or two and then suddenly and without reason the music stops. I try to restart the music and while I can press play, nothing happens. Roon appears to register ‘play’ (play button changes to pause) but the playback does not start. This happens with internet radio as well.

I have checked internet connection and confirm no issues there. Wifi seems solid and operational.

The only way to resolve the issue is to close / quit Roon completely (on the Mac) and then restart. This appears to resolve the issue but the same happens an hour or so later. The problem actually just reoccurred (Roon is frozen right now) and I have captured the Logs to send you in case it helps. Please see below:

Describe The Issue
Roon works for an hour or two and then suddenly and without reason the music stops. I try to restart the music and while I can press play, nothing happens. Roon appears to register ‘play’ (play button changes to pause) but the playback does not start. This happens with internet radio as well. The only way to resolve the issue is to quit Roon completely and restart.

I have included the zipped Logs through the following OneDrive link:
https://1drv.ms/u/s!Ag_QB40n-e8AjMAlhFns_tF-SSweUg

I would be grateful for your help

Sleep hasn’t been enabled via a system software update?

Good thing to check, thanks for the heads up

I assume you mean Mac OS Sierra update. Checked and the settings on my Mac are such that the system never sleeps.

Roon Core froze again just now. As described above, I am able to select tracks but once I press play nothing happens. 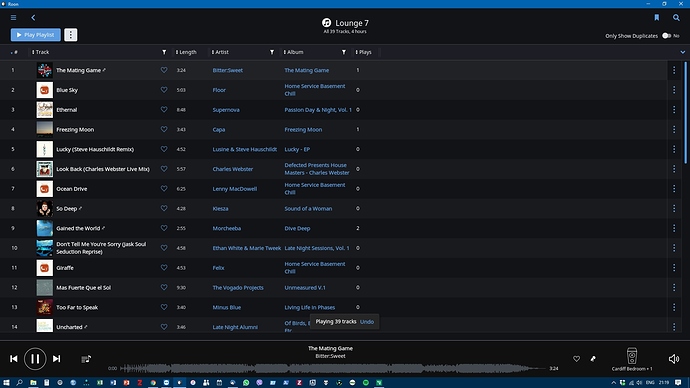 @support
I may have partly diagnosed the problem: There appears to be an occasinal DHCP issue with my service provider broadband. This is probably responsible for the dropout when I play internet radio stations. However… no explanation why Roon freezes after that point, even when the DHCP problem resolves itself.

In any case, it appears that the DHCP issue is the trigger for the problem so I will proritise resolving this with my ISP.

Can you please remove this support request for now.
Many thanks

Can you try a fixed ip?

Hi Ratbert, thanks for the idea and I think that would provide extra stability. I actually did some research to find out more about the DHCP problem I was getting and it appears other Virgin media (my ISP) users have had the same. Replacing the ISP issued modem router seemed to help so i will be doing that anyway just to be sure.
Thanks
Yiannis

As it turns out (after a lot of investigating) my Samsung TV was causing a hostname / IP conflict in my WiFi. Further research revealed that this is reported online and it remains unresolved. The problem was also captured in my Router’s system log. I simply disconnected my TV from the network, rebooted and all is fine now.

Thank you Rarbert for all the help and support.