Description Of Issue
I was using Roon for much of the day (Saturday, January 30) with no issues. Then in the late afternoon, early evening, I experienced multiple audio dropouts – virtually every 20 to 30 seconds.

The track would stop and often skip to the next one. I thought it might be my network so I rebooted everything, but that didn’t help.

Eventually I reverted to my pre-Roon system and everything worked fine. VERY frustrating.

Roon has greater network demands than other streaming software, which WiFi may not be able to supply reliably. Other WiFi users in your neighborhood can be competing with you for limited bandwidth and when their networks are busy, yours suffers. Some WiFi users run over-powered WiFi base stations that make congestion more likely. Airport Express has also been mentioned as an aggravating factor in several previous threads. It would be worth testing a wired connection between the core and the endpoint to determine whether WiFi/Airport Express are causing the dropouts.

I also use an Airport Express as router and an other one as “receiver”. You can try to use an other network channel. I also had to do this, and it helped. If this doesn’t work try to change the band from 2,4GHz to 5GHz, but only for the Airport Extreme and Express to connect to each other. Rename the 5GHz band, so that other devices can use the 2,4GHz band as usual. Good luck!

I am retired so Home most of the time my WiFi is normally fine but blinks at 17:00 when the neighbors get home from work / school and start using their internet

Answer use a wire

…or maybe a powerline adapter, one at the router, the other at Your bridge. 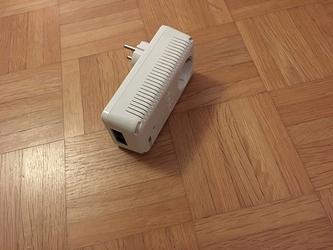 This one has two ethernet ports. But You’ll have to get information, if this would be possible in Your country, with Your electric components, …

As per Carl’s request I am posting again.

I am relatively new to Roon and, for the most part, enjoyed it a great deal. Yesterday (Saturday January 30th) I’d been listening for most of the day with no problems. But around 4 p.m. (Mountain Time) I experienced multiple audio drop-outs. Some lasted a few seconds, others lasted so long Roon skipped to the next track. It was un-listenable so I temporarily disabled Roon and returned to a previous system/app (Naim) and everything worked fine. I’m back to Roon today and apart from one brief drop-out it has performed well.

My music sources are a local hard-drive (Naim Unitiserve), Tidal and Roon Internet Radio. The local hard drive holds approximately 250 albums. I have about 150 albums in my Tidal favorites.

My modem, located on the 2nd floor, is from my Internet provider (Telus - Calgary, Alberta) - Model T3200M - and is less than 2 years old. Apart from the Roon issues, all other Internet functions work fine.

As per Carl’s request I am posting again.

Hi @Laurie_Long,
I think there is some confusion here as I did not request that you repost. However, I did request details from another user in a different topic to this one.

I’ve merged your new post into your original topic so all the information is together.

My apologies for the confusion Carl. I thought your earlier email was addressed to me as it appeared I was the only name in the “To” line. As I said — I’m “new”.

Friendly Helpful Fellow User here. Dropouts are usually a network issue. I noticed in your network description you are listing Airport Extreme and Airport Express in the mix. These devices have long had various issues.

Here is a link to Roon’s Networking Link: Network FAQ

However, I am extracting the pertinent section (highlighting my own):

Poor quality or underpowered routers can play a major role when it comes to networking difficulties. 802.11n was superseded by 802.11ac five years ago, so at this point, 802.11n routers should be considered obsolete. Furthermore, the performance difference between early 802.11ac routers and current models can be substantial due to differences in CPU/RAM allotments. ISP-provided routers are often underpowered and poorly behaved. Finally, we strongly recommend against using Apple network devices such as the Apple Airport Extreme and Airport Express (note: it’s fine to use the Airport Express as an Airplay device). To ensure the best performance, we recommend against using these devices.

Thanks for the response and advice Daniel. I had heard/read about possible problems with Airport Extreme and Express. It just mystifies me how everything can work fine the vast majority of the time then crash occasionally.

I know the problem I’ve highlighted is not uncommon, and I’ve received some helpful advice from the community. Can I hear directly from Roon Tech Support before I invest in a new router?

Thanks for reaching out! As other users mentioned here, we have seen Apple Networking gear to be unreliable when used with Roon, and as such we suggest avoiding these types of routers in your setup if possible.

My music sources are a local hard-drive (Naim Unitiserve), Tidal and Roon Internet Radio. The local hard drive holds approximately 250 albums. I have about 150 albums in my Tidal favorites.

But around 4 p.m. (Mountain Time) I experienced multiple audio drop-outs. Some lasted a few seconds, others lasted so long Roon skipped to the next track. It was un-listenable

When this issue occurred on your Naim, were other zones impacted as well, or just the Naim? If multiple zones were impacted this further suggest networking issue, but if it’s just the Naim that’s impacted we can focus more on this device in particular.

Thank you for your response Noris. I can confirm that the audio dropouts have occurred while listening to locally stored albums as well as Tidal and Internet Radio. I am in the process of researching new routers to see if that might correct the problem. If you have any technical suggestions in that regard, please feel free to pass along.

Our Networking Best Practices Guide provides some great networking suggestions, as has specific settings that need to be changed for certain brands:

We also have a few threads on the forum where users provide feedback with different routers:

My Router has been acting up lately. Looking to replace it. My Roon Core and NAS are both hardwired. But my control devices and Bluesound speakers are wireless. Any recommendations? Thanks!