Mytek Liberty DAC fed via USB from the Zen

Roon always hangs/stops playback at about 1-2 days of playback.
The bar below the music, which usually indicates where in the song you are and the waveform, just goes back and forth, like a progress bar that goes both ways.

The only way to get it running again since you can not start any music is to restart the Zen and thus Roon gets restarted.
It takes much longer to restart the Zen when this has happened, probably since Roon is stuck in some weird state.
Oh, and I can access the Zen, no problem, it’s running.

I got a this Zen so that I may be able to avoid the Core crashing on my PC (exact same behavior) but it seems it’s not the PC, it’s the software.

Please advise so that we can solve this.
@support

The next time the core gets in this state can you make a note of the time you see this occur? Respond here with the time and we can enable diagnostics on your account so the technical team can take a look.

I think I scared it

no hangs since last time

Queue is empty, it should have several thousand songs in it.
And the “time bar” just goes back and forth. 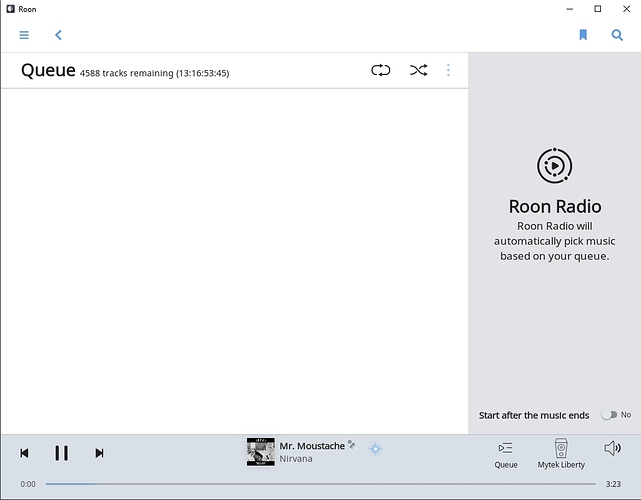 I’ll leave it hung for now, but I do want music soon.

@support @dylan
And now it’s crashed again. Been playing for maybe 3 hours.
Same thing, hung, can’t do anything, the “time bar” just goes back and forth.
I need this fixed please, it’s very annyoing.

Thanks, now that I have the timestamp I’ve enabled diagnostics on your account. The diagnostics report will be uploaded the next time your Core is active. Once that’s been received I’ll pass it over to the technical team for analysis.

You mentioned previously that the same behavior occurred when using a PC as your Core. Can you give some details on that machine?

Also can you confirm how many tracks total are in your library?

Running the Zen with ethernet, music files are stored locally on the Core

Is the Zen connected to the primary router or one of the APs?

Then Zen is connected via the router (switch in between).

The library in the Zen (Roon core) is 6394 tracks imported.

I can confirm that the diagnostics report has reached our servers and the they’re with the team for analysis.

When you moved from the PC to the Zen, did you restore a backup and migrate over or did you start fresh?

I just spoke with their team about their analysis of the logs and wanted to follow up with their feedback. They’re still looking into things here and are hoping to get a bit more information.

You mentioned that this same exact behavior also occurred on Windows before using the Zen. Do you still have this Windows device? Could you temporarily switch back to the Windows Core and reproduce the same behavior and provide a timestamp for when this occurs?

@dylan
Yeah I can install the core on that one again, sure. I’ll get back to you.

Edit: I’m now back on the windows core

@dylan
Starting to wonder if this is because of the database backups?
I’l set a time during the day and try to monitor the behaviour.

@dylan
Not managed to crash Roon as if yet.
Running Core on my win10 pc and the InnuOS as a player only.
Will keep trying to get it to crash.
Edit: It’s been stable when using the Win10 machine as Core, however, that’s now how I want it

I enabled the Core on the InnuOS again now to see if it hangs.

Now running at the InnuOS again, turned off DSP just in case. Changed backups to every 14th day, just in case. I’ll report back in a few days, or earlier if it hangs.

@dylan @support
Did the team find anything in the logs?
InnuOS just sent out a software update so that I can easily download the logs from the Zen if that helps?
It’s been stable now!
Not sure why, I only updated the InnuOS today so it’s not that.
Thanks.

Glad to hear that things have been remaining stable for you. If you do see this issue return please let us know and we’d be happy to continue investigating this.

@dylan
It’s started again. Last two days it’s hung twice. Once after like a few hours, and now after sitting paused over the night.

It sounds like things were stable for quite a while here — Was there any change in your setup in the last couple days, or anything specific that you were doing that you hadn’t done previously? Does a reboot of the Zen restore things to normal?

@dylan
The only thing we’ve done is too move around furniture, so everything turned off for a while. That’s it.
If I disable/enable Roon, it’s fine.