Hi - Loving Roon and would like to stream it to four AVR’s throughout the house but not over AirPlay. I have AirFoil and it sounds ok until I listed the the locally connected Yamaha Aventage on the Mac Mini (HDMI). Also have optical connected. Not sure which I should use but either are better than Airplay.

How do I stream, over my wired ethernet network, to the the other units? Is there a Roon device, that would do that? The Yamaha’s can see the MacMini as a server, but streaming always seems to want AirPlay.

How would the MacMini be set for sound out?

Thanks for the help in advance.

Chris, I’m going to relate what I’m doing, even though it may not be the best solution for you. I hope it gives you an example to think about relative to what you want to accomplish.

I’ve got 3 zones setup throughout the house, all receiving good quality streams very effectively. With 2 musically inclined teenagers, it’s common for us to have different streams playing simultaneously in each zone. I have an old PC, upgraded to Windows 10 and dedicated as my Roon Core server, hard wired via Ethernet cable to my router. I then have inexpensive WiFi-enabled Windows 10 laptops, with Roon installed, dedicated in each zone to access the Core. Each system is a bit different as to the DAC etc. I’m sure there are now WiFi enabled Roon-Ready devices available that could effectively replace the laptops, but they were already here. All the computers actually came out of what my son calls calls “the old tech closet”.

The system works well, sounds good, and didn’t require the purchase of a bunch of additional equipment, which kept my wife from worrying too much. Could it be better? I expect so, but our audio equipment, while satisfying, is not extreme (no 5 figure stuff here) so it matches up very well as a source in each zone.

I’m not sure how to avoid AirPlay if you keep the Mini, which is one reason I went with the PC, as opposed to my Mac, as the Core. I’ve never had good luck using AirPlay either. Sorry I have no info there.

If anyone has a suggestion as to improvements, I’m all ears.

What available digital inputs do the AVRs have?

Most obvious, simplest suggestion is a raspberry pi (or Cubox) with possible addition of a HAT that gives spdif output if you don’t have USB inputs. Then you’re running Roon RAAT everywhere, and you get a very flexible setup.

Boy am I old! Steve, although I have a vague idea of the components you recommend, I don’t think I understand the implementation. What you’re describing sounds pretty simple - care to expand a bit?

Thanks Bill. As I suspected, I am going to need some Roon Ready device to accept the ethernet only (RAAT Protocol) stream and then go optical or hdmi into each AVR. As Steve also mentions, RasPi box will take the stream and output Toslink (spdif). No experience here so would love to see a diagram or something.

All the music is on a Synology 1813+ and I only have the one MacMini. So looks like a little more investment if I want to stream FLAC natively. More fun ahead.

Here’s the network diagram of my current setup. As you can see, I have two RPi boxes, one of which uses a HAT to give S/PDIF input to my Denon AVR. 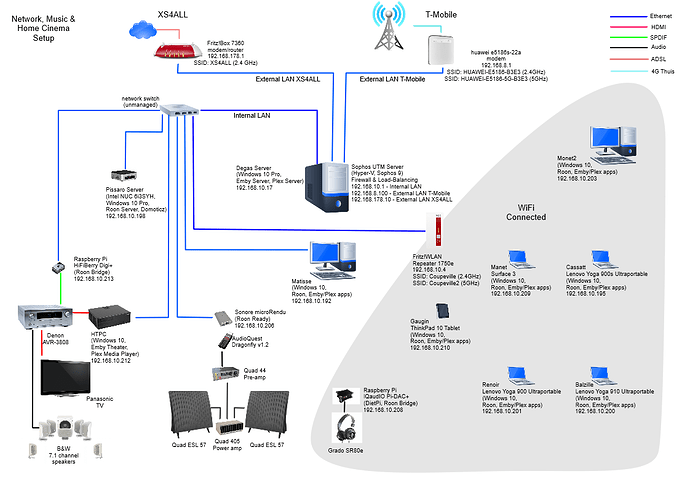 This would be fine for stereo, but if you want to use multichannel into your AVRs, you’d need to use the HDMI output on the RPi.

I’ll come back and expand further if I can find some time, but essentially a Raspberry Pi is one of many of the recentish tiny computers that have operating systems installed on a SD card, standard inputs/outputs such as Ethernet and USB/hdmi, and community based support generally. They come as a small circuit board, which if you like you can add a case. They’re general purpose mini computers but have started becoming more common in audio use.

A HAT is an extra hardware circuit board that plugs onto it, and provides additional functionality - there’s a lot of activity in audio here too.

Anyway, very simply, Roon have their ‘RoonBridge’ software which runs on these devices and lets Roon see them as an output zone, which Roon can then send music to over the Ethernet. These devices then connect to your audio gear, via various methods.

You’re not old, you’re just not familiar with it. It’s very simple to setup, especially now there’s an operating system (Dietpi) that installs easily and has a simple RoonBridge installer too.

Have a read around topics here for raspberry pi, Dietpi, RoonBridge, and you’ll get the gist. Message or post here if you need more help - there’s a lot of community support here as with everything Roon.

Ignore the setup steps above - there are easier ways now. Just skip through and look at the pics.

Thanks for the explanation Steve. A nagging problem with my old tech solution is noise. I’m guessing these tiny dedicated computers that can offer cleaner methods of interconnecting might help with that.

Interesting reading - I enjoy learning about new developments. I’ve fallen behind however in tech developments over the last 15 years or so due to keeping up with family developments. There’s only so much time and money, and that’s where both usually go!

Wow. Thanks Steve. Exactly what I was trying to understand on building a Roon end-point my AVR could use to accept an ethernet audio stream. Perfect.

Curious what you use the HTPC off the Denon for as you have other servers on the network besides PI.

Anyway, I’m brand new to RPi but now I have a reason to learn, plus my 10-year old son can help. Great project.

Any particular RPi brand/setup anyone favors?

Wow. Thanks Steve. Exactly what I was trying to understand on building a Roon end-point my AVR could use to accept an ethernet audio stream. Perfect.

Curious what you use the HTPC off the Denon for as you have other servers on the network besides PI.

Erm, if you’re referring to the network diagram, I’m Geoff, not Steve…

The HTPC is used for the Home Cinema and runs Plex and Emby clients (the Degas server runs the Plex and Emby servers) used to show movies and recorded TV. It also has Roon installed, since with Roon 1.3, I can now use it to play 5.1 audio recordings through the Denon.

Geoff - Apologies. Much appreciate the detail. Great forum. Gave up on JRIVER. Interface and help just no match for Roon.

So if I’ve got this right, I’d use a Raspberry Pi computer, wired by Ethernet and without a DAC HAT as I have an ESS DAC in the Yamaha 3040 AVR. I would need to add a HAT to add an optical out for audio as someone said the HDMI out isn’t the best for clocking?

Just to confirm - RoonBridge would run RPi and my end result would be the MacMini Core and a RPi computer at each AVR/Yamaha connected via optical. Roon core would see these and I’m good to go for ethernet streaming at the highest audio resolution. Thanks again for all of the great help.

Couple of things to note here though;
I don’t use multichannel or hdmi output, so you’d be better to canvass opinions on whether the pi is the best device there, and whether hdmi is a good idea or not - opinions tend to vary on these things. We use the term ‘pi’ slightly generically, there are other similar’mini computers’ that have certain pros and cons. It may well be for your specific case, that a pi isn’t best. They’re generally cheapest and most prolific so are a good suggestion as starting point.

If you’re going pi and optical out, you have options with HATs from iqaudio, and hifiberry among others. Even adding these probably gets you a zone control for under £80.

A few days research will pay dividends, and then you can order and set it all up - that’s the fun bit and doesn’t take long at all really.

Do you prefer RCA outs over optical? When you say you don’t use multichannel, I assume you listen in Stereo only. Me too.

Audio quality wise, I might grab a cubox and an RPi with optical & RCA hats for a little taste test. Either way, you’re right that it’s a bit of fun in finding the fit.

I’m sure the debate will rage on separate DAC’s and RoonReady components but I’m almost there with what I’ve got. Thanks.

Yes, stereo. I just assumed multi channel for some reason from the HDMI.
My Main DAC has USB so I went for a RoonReady device there (previously it was USB from a Mac mini). I added a high quality linear PSU to it and I think it’s better, but could I tell in a blind test? No idea, possibly, possibly not.

In kitchen/bedroom I use a pi and HAT and a simple headphone cable info Marshall Stanmore speakers. It might be surprising but considering it costs about 1/80th of my main hifi, I really like it. I have it grouped often with my main hifi and when I walk into the kitchen I don’t seem to lose anything enjoyment-wise. Sure, it’s not as good technically, but it also doesn’t ever make anything sound bad. In fact, I’ve come to the conclusion that if I ever had to give up my main hifi, I’d be more than happy with a house full of Pis and simple speakers. Previously I would have thought very differently. I love my hifi, but it can become more of an obsession than I’d like

The odroid c2 gets a lot of praise. Less choice of hats but is much better specced network/cpu wise. And of course there are plenty roonready devices from more affordable to uber-expensive. The worlds your oyster.

Boy am I with you on that! I can see a future of (not too far out) of just enjoying the music without the fiddling around. A lot of great sounding “simple speakers” out there that will pair nicely with PI or something similar. High hopes for Roon and a long run of success. A much welcomed solution -thank you.