I raised this question in a different thread but that segued into a discussion about Roon Radio.

This topic is about playing a particular artist, not radio.

For instance, I have a FLAC 192 kHz 24 bit version of Tea for the Tillerman in my own library.

If I start playing Cat Stevens as a selected artist (not Roon Radio), invariably Tea for the Tillerman will kick in pretty quick and every track played from Tea will be sourced from Tidal’s FLAC 44.1 kHz 16 bit version.

I’ve noticed this over and over again. Roon almost invariably opts for Tidal over my own 100% HD track library.

This is really frustrating in cases where I have a curated library by a particular artist.

I may have hand picked a few albums that I like by that artist and would like to listen to music with a bias toward that curated sample.

But if I play the “artist”, Roon will simply “shot-gun” play any tracks by that artist. This defeats the point of developing a curated library.

I can unlink Tidal as a “fix” but that shouldn’t be necessary.

I think that should be restated as a statement rather than a question.

Roon Rado should prefer the primary local library track over the same streaming service track. Especially, if the local track is higher resolution.

So, I just kicked off a Roon Radio session using Cat Steven’s “Where do the Children Play?” from my library’s DSD version of Tea for the Tillerman. The next track chosen was CSNY’s “Our House” from Deja Vu. The track selection is fine, however (and as you can see below), it is playing the Qobuz 24/96 version when I have the better 24/192 version sitting there in my local library. 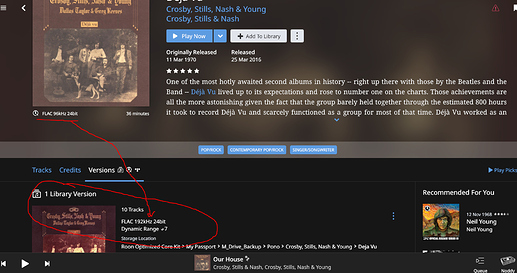 And the next track, Elton John’s “Take me to the Pilot” , playing the 24/96 Qobuz version while I have the 24/96 version sitting in my local library.

And the next track Eric Clapton’s Willie and the Hand Jive, playing the 24/192 Qobuz version while I have same in my local library.

Same here. Like the related Radio issue, I assumed this was by design.

But why add exactly the same album from Qobuz as what you have in your own library?

Roon doesn’t care whether a Tidal track (via “add album to library”) is my library or not, if I play an artist, Roon plays tracks regardless of library status.

In fact, when Roon chooses to play an artist track on a Tidal feed from an album sitting in my physical library, I am also presented with the option to add the Tidal album to my library…

I believe you are responding to @Rugby, but I don’t believe he has the Qobuz version of the album in his library. Note how there’s an “Add To Library” button next to the Qobuz version. I just did this: Navigate to artist: Michael Brecker, click Play Now. The first track Roon plays is one I have in my Library, but Roon streams low res from Tidal instead. I realize the Tidal version is a high res version, but I have a low res Tidal subscription. Perhaps Roon can’t determine that. 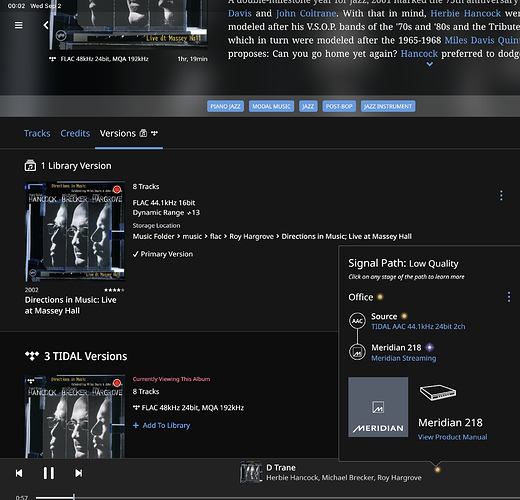 It’s looks like the Tidal versions are in my Library, but they most certainly are not.

That is correct, I do not have any of the streaming versions of the albums I mentioned in my library.