It’s not clear what GPU you refer to, your Intel® HD Graphics 510 from the thread title or the NVIDIA GeForce MX110, but there are (were?) problems with certain intel GPU drivers. You can try and use the 32-bit version of Roon instead of the 64-bit one, that should resolve the problems with the intel GPU.

Roon is playing, and if artist’s album is opened were 3 little blue blocks are moving

What exactly do you mean by this, can you clarify further? I tried on my end and my GPU usage is pretty normal even when Roon is playing.

I was referring to Intel® HD Graphics 510 I have installed the 32bit version as you mentioned now the GPU usage is at 19/20 % also browsing Roon GPU spikes up to 50 /60 for 2seconds is that normal? 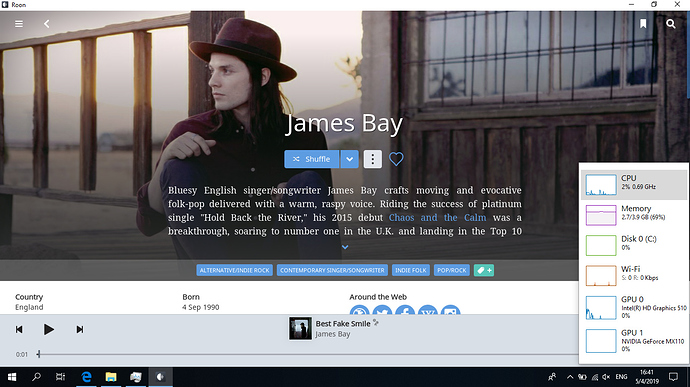 Screenshot (1).jpg1366×768 292 KB
In Screenshot 2 music playing and the blue little spectrum that is playing next to the track is putting a heavy load on the GPU 21% 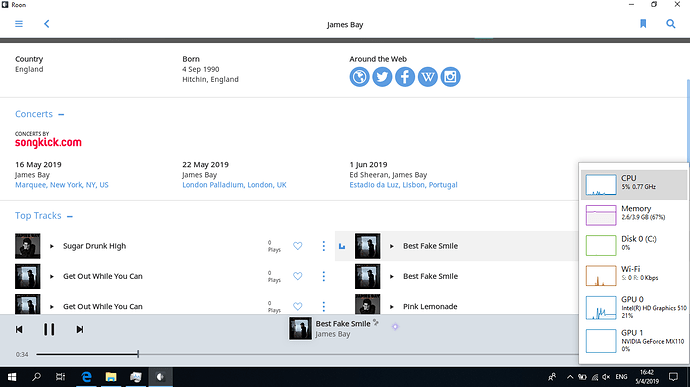 Screenshot (2).png1366×768 124 KB
Screenshot 3 music playing but I switched the tab to another location so that
the blue little spectrum that is playing next to the track will not show and now the GPU load is 2% 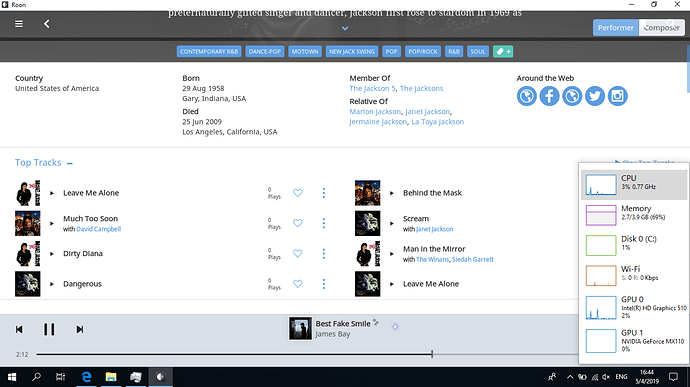 Thanks for sharing those screenshots.

Roon is based on OpenGL (similar to how many video games operate) so seeing some GPU activity happening in the background when you are going through different pages or objects are moving would not be too worrying in my opinion.

If the GPU usage is not causing any issues on your system I would consider this normal behavior and it is to be expected.