Roon is using a lot of resources

Run Core and Remote on the Desktop.

Roon and Roon Appliance are taking nearly a GB of memory, causing the fan to run permanently.

I did change my whole library over to Qobuz from Tidal, but that was over 4 weeks weeks ago.

This wasn’t an issue until recently. Is there anything that I can do to reduce this? 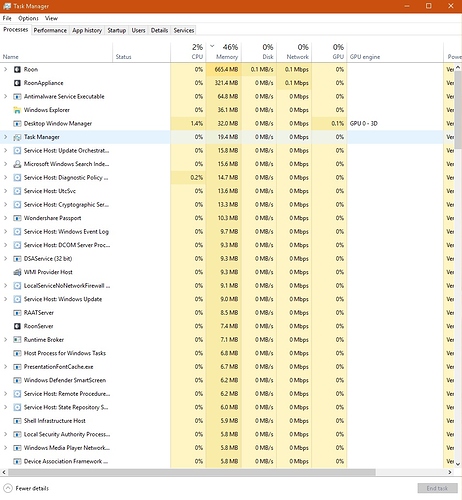 Best to wait until someone from the support team chimes in, but I did notice something strange about that Task Manager screenshot. I would have expected that Roon would have had an entry “GPU 0 - 3D” in the GPU engine column…

I’ve found that if Roon is idling then it will not be using the GPU constantly and the “GPU 0 -3D” only pops up every so often. As soon as you engage a graphic element like the moving play bar when playing music, then it is active all the time.

I can’t justify a dedicated Rock server right now. It has to pull dual purpose.

If this had always been a problem, then ok, but it is definitely using a ton more resources than even a few weeks ago.

Hmm, not the case here. Mind you, I’ve got a Nvidia graphics card in the desktop PC running Roon remote. Having said that, I’m not seeing any stress on resources. Everything is ticking over normally.

There are lots of things Roon can be doing in the background during idle, like retrieving updated metadata for all your albums.

Just keep in mind that Roon Core designed to be reasonably “heavy” so I wouldn’t get too hung up about resource usage, unless it’s causing other issues.

Are you experiencing any other symptoms? Dropouts? Slow performance in Roon? Resource problems with other apps? It’s ok if you’re just wondering about the numbers, but these don’t look concerning to me.

I did change my whole library over to Qobuz from Tidal, but that was over 4 weeks weeks ago.

From what you mention here, it may be possible that your library size has doubled with the services switch. If you have made any edits to your library back on TIDAL, those should still be part of the database and would require additional resources to maintain.

I’ve found that if Roon is idling then it will not be using the GPU constantly and the “GPU 0 -3D” only pops up every so often.

This is what I have noticed as well, the GPU field appears to only be active when actions that require GPU processing is actively occurring.

Is there anything that I can do to reduce this?

Since you have both Roon Remote and RoonServer on the same machine, you can try reinstalling just the remote aspect to see if it will help. It is possible that it may not, but if you want to give this a try I would definitely suggest making a Backup of your current Roon Database first.