You acknowledged an issue in Windows and that the next release would address this.

The problem being that Roon will crash if minimised for a while or put behind another app for a while, or it will freeze or generally misbehave.

How about releasing a patch right now with that fix rather than us suffering for yet another year?

I’ve already posted my PC info above and adding screenshots here. Roon has crashed several times since this post, most recently on 11/15 @ 0649 AM/EST. It was running in the background and streaming a live radio internet station in two locations (office and living room). I had started the stream and a few minutes later went to log into the PC hosting that Roon core, when it crashed. As soon as I typed in my Windows PIN and logged in. It crashed when I hit ‘enter’ and screen opened to my desktop. 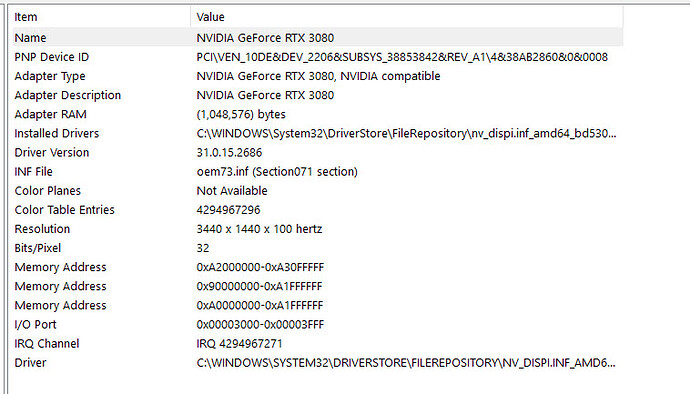 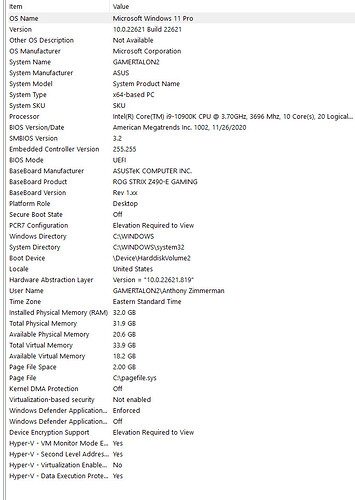 Do you have all the extra stuff loaded from Nvidia? I only run with the base driver and physX. I don’t load the nvidia experience, audio driver, etc etc etc. and don’t have this issue at all.

I can repeat this crash with 100% accuracy.
I have been able to for quite some time.

I would be willing to again offer any and all information I may to fix this.

My drivers are current, my system is properly patched.

Telstra Router
All computers and audio devices are connected via TCP/IP
I have a Clipsal StarServe hub with an ethernet switch to distribute ethernet throughout the house.

Naim NDX. I run the uPnP Bridge to connect Roon to Naim

Roon Core is running on a PC. This works fine.
My Apple iPhone connects and works fine.
I have a work laptop HP Z-Book G6 i9, 64G ram. This is the computer with the issue.
After initially queuing a CD to play, during which I am using my laptop for work, I switch back to Roon. Roon hangs, often crashes several moments later, or sometimes eventually responds (normally if I do not click any buttons within the app).
This has been happening for at least 6 months I would say. It had worked fine in the past.

Yes, I have NVIDIA GeForce Experience loaded since I like the driver update prompts and ease in updating the drivers.

Update on my end - Roon will still outright crash, but the intermittent and extremely annoying lagging issues have mostly subsided. It is also crashing much less. Although I don’t know if its “solved”, its certainly moved in the right direction.

A post was merged into an existing topic: Upcoming change to Roon subscription prices (January 1st, 2023)

The freezing and crashing has been going on for over 7 months. Still no fix and now a price increase. I like Roon a lot, but this forces me to make a decision that otherwise would have been an automatic renewal.

i get exactly this…ALL DAY LONG

hit the nail on the head. the fact that they spend so much time working on new features instead of making the software stable is insanity and i refuse to continue funding madness.
ALL roon labs resources should be focused on this!!!

I have this issue a few months. The longer roon plays minimized the longer it is freezed. It was never in the past.

I don’t have nvidia at all.
AMD graphics here and still the same issue (either on Vega or dedicated) so I doubt it is due to a graphics card or drivers.

Same problem here.
Too many months without solution for a non free software…
I’ve seen freezes happen only if Roon is playing music. Otherwise never seen problems maximizing the window.
Can you confirm this?

I am very disappointed in Roon, not only because of the problems discussed in this topic, but also because they move and delete my posts here!

I’m personally not sure some of these posts were helpful.

I generally don’t taunt people who prepare my food, are secretarial staff
(they run your office don’t pretend otherwise) or software devs I wish to get help from.

I do not understand the lack of response from Roon either though. It isn’t often one gets a bug so easily reproduced. It would appear it should be t-ball knocking it out, which makes the complete lack of reply odd.

I speak for no one but me and generally do that poorly as well.
Thank you for the soapbox.

I think Roon can’t figure this one out. In the mean time, running Roon in a window is a “work-around” that works for me.