Roon will not restart after the update and server restart.
Any suggestions from someone who may have experienced this before. My auto response would be to install and uninstall the pgm. If i do this will the db need to be reindexed (another week long process i would appreciate avoiding)?
TIA

I am sorry to report that the new patch has not resolved my issue. I started Roon this morning, put on a playlist and minimized the Roon client (I run the client and server on same machine) and then proceeded to do other things on the same machine. After about an hour of trouble free playback and with music still playing, I attempted to maximize the Roon client and rather than maximize, the Roon application terminated. This is a DIFFERENT behavior, in that it immediately failed after attempting to maximize, rather than maximizing and then hanging and finally crashing. There was NO WINDOWS SYSTEM EVENT logged, in contrast to previous behavior.

Verdict: the problem I was experiencing is not fixed although the manifested behavior is different than previously.

edit: sending output to system had same results. Still crashed after being maximized over about 45 minutes.

In line with above experiences, build 970 did not solve the issue for me. Today I experienced a mix of familiar crashes and new behaviour:

The last case is a slight improvement. It means that sometimes Roon is just slow to respond and otherwise does not behave unexpectedly. However, the underlying issue seems to be pervasive and still also causes full-on crashes.

What did not happen anymore is that Roon skips to another track when it recovers.

Sorry to report 970 doesn’t stop my Roon Core crashes. Same as before, minimized comes up and bombs out. As other’s said, seemed like it crashed quicker.

Sort of a mixed bag after being forced to uninstall and reinstall the core due to the corrupt install that occurred when updating.
So far, in about an hour of playing, i have not had a crash on the remote the other than its initial turn on after uninstall and reinstall of roon core software.
Disappointed to have to report my memory usage has not changed and is well beyond what i had seen in the past and what others are reporting. I am currently using (now and before the update) around 3.8G +/- 10% (with peaks above 9G) and this is without playing anything or using dsp (both of which dont seem to affect the memory usage number which seems odd).

Roon is working again for me - by only installing the server part on machine mentioned in previous post. The latest build keeps running, so thats a definite heads up! Will keep on testing using multiple clients.

So far its still freezing/lagging for me after the update. I am either not as sensitive to this issue as other users or its not as bad on my machine, but it does happen.

1.) It does not really have relation to minimizing / maximizing the app, I’ve noticed it both ways. It just has to do with me not doing anything with Roon and music is playing in the background for a while.
2.) I haven’t tested this. My Roon sits in now playing/track listings 99% of the time.

Do note that the update may not resolve all possible causes of the hang, but please, do let us know if you’ve noticed any improvements in the behavior. You can find the full release notes below.

Still seeing the same behavior in the Windows app. Leaving it alone while music is playing will eventually result in it becoming unresponsive for 5-10 seconds… or even crashing. My server (which runs on Linux) is unaffected, continues playing music and can be controlled by my smartphone.

I just noticed that my roonserver on my Windows Server wasn’t working and stumbled across this thread.

This is the error that I’m seeing:

Is there a known fix to this? I can’t get Roon to start at the moment due to this. It immediately terminates when I try to run it.

My issue is resolved.

It was fine last night after update. However, it start freezing again the next day.

I would suggest opening a new support thread filling in all the requested information.

Hi All , I have the same issues described here but is new to me. Now I’m using a mini PC to run the Core but when I used the Core with my surface I don’t have the issue…

I had the first crash of the day. Played for 3-4 hours continuously without crashing.
I have been monitoring memory usage since this issue started and noticed the correlation between crashing and memory usage… After starting Roon this morning, memory fell to its lowest usage level since i have been monitoring at under 2G. For the second time since updating to 970 Roon just crashed (after enlargening the app window) and checking memory i see that it is now back above 3.5G usage on the core.
Neither of the problems that were supposedly fixed in 970 have been fixed for me. It does though, appear as if it is less bad (crashing less frequently) but not “fixed”

Roon have crash like 5min after the update, nothing change for me… 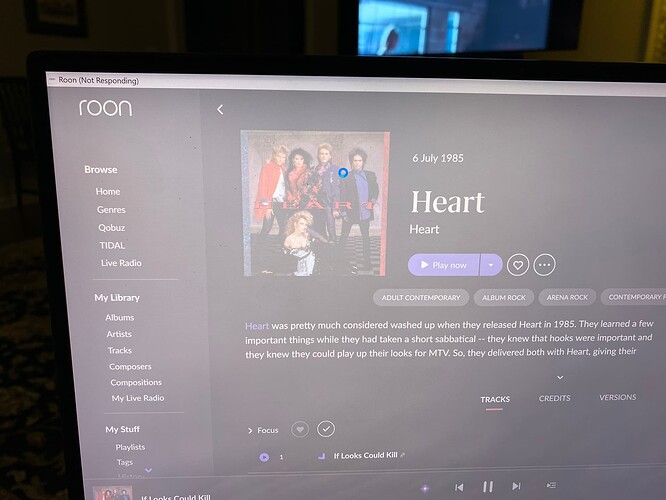 More confirmation 970 failed to address my issue.
Memory usage this morning (after shutting it down last night) is hovering in the higher 3G range (instead of high 1’s and low 2G as it was yesterday best case) and i had another crash (this time i did not maximize the existing window).