Used Roon on my old desktop with W10 and now on my complete new desktop with W11, both as server and remote. In all situations i get the freeze after the minimize to tray. Because of the same problem in all these different situations it seems this must be a Roon problem. Hope it will be solved soon, because its enoying and may not happen with software in this price class,

Just wanted to confirm that this is still happening for me as well with Roon 2.0.

Me too, on Roon 2.0. I tested it earlier tonight and my Dell froze solid. It’s back to running Roon in a Window. 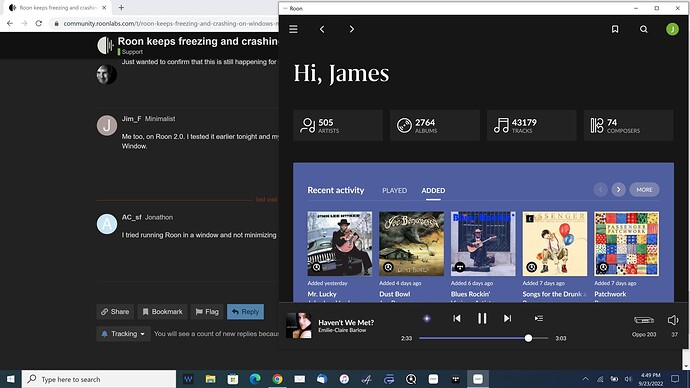 Obviously, this has been going on for 5 months. It’s quite frustrating. Now that 2.0 is out, I hope it’s a top priority to get fixed.

Seem like it would be fixed by now if they knew how.

Only thing that’s working for me is running the bridge on windows, and controlling it through another device. The full application on windows is just not working ( crashing after a short period ).

Shouldn’t have to change OS/hardware just to use software.

Unless the OS/hardware is no longer supported by the software.

Did you try the workaround I posted awhile ago.

I think you can keep Roon Maximized on a different virtual desktop, and just flip between desktops. In fact, you can set it so that the Icon on the taskbar will automatically move you to the other desktop.

I’ll give this a shot right now. Thank you.

Crashes on my W10 laptop remote mostly occur when I start a daily mix playlist then leave it on the track listing without backing out. After a period of time (?) when I go back and hit the back arrow Roon terminates. If I go back to the home page after starting the playlist everything if fine.

Please accept my apologies for the delayed update on this issue.

To provide you with the current status, the developers have prepared a potential fix that will address what we believe to be the condition underlying the Windows performance issues you’ve been reporting. We have not yet released this fix, so it was not included in the recent release of Roon 2.0. However, we’re fully on track to include this fix in the next regularly cycled Roon update.

At worst, this fix will still relieve most (if not all) symptoms and provide an immediate next step to rapidly implement a comprehensive, permanent resolution. Best case scenario, this fix itself will resolve the issue entirely.

Your patience has been saintly. We recognize Roon is barely functioning for those users for whom the workaround has not improved symptoms. We’re working hard to bring this to a quick resolution. I’ll post here as soon as the fix has been officially scheduled for release.

Thanks Connor for the update - Much appreciated to know this is a high-priority fix!

That’s not why I want an Apple Macbook Air M2. I run Roon in a Window on my Dell and that negates the issue for me.

Okay tried this, still getting the freezing after a time. Gave it a day to test. Thank you.

What’s the usual timeline for the regularly cycled Roon updates? I’ve moved over to just using the Tidal app directly because it’s become a chore to keep exiting out of the app just to have it work. I love Roon, and don’t want to have to cancel over this, but really don’t see much justification in continuing to pay with it being broken on my main ( fully functional otherwise ) Windows PC.

Great question. Roon generally operates on a two-week release cycle to implement fixes in a regular cadence. While we don’t have a precise date for the next release post-launch of Roon 2.0, we’ve already started the process of gathering fixes and changes to prepare for the next release, and it shouldn’t be more than a few weeks at this point.

I will absolutely keep this thread appraised as we gain clarity on that timeline; I don’t want to give false promises for the precise date, but I can assure you we’re aiming to hit the sweet spot between immediate urgency and quality assurance.