Roon keeps kicking me off

I have been kicked off Roon about five times in the past 24 hours. By “kicked out” I mean Roon stops playing, I have to turn off and my my server (a Innuous zenith se) and then put my username and password back in. It eventually works after rebooting but it’s frustrating. The only change I added is an Innuos Phoenix reclocker a few days ago. I just updated the firmware on the server. I reinstalled the Roon app on my PC and iPhone last week. It is not a network issue as internet and streaming services all work fine on the same PC. It’s a shame because my system sounds better than ever.

I am not averse to reinstalling Roon from scratch if needed - I have very few CDs ripped to my server and run mostly Tidal or Qobuz.

Have you taken the reclocker out of the chain, temporarily, to see if the reboots stop?

Yes and still with the same issue. I notice that it tends to lock up and reboot whenever I ask it to do something new. So if I play three or four songs a from one album it is fine, but if I then open up a new album in Tidal or Qobuz or look up a new artist, it then freezes. When it freezes (like when I press play on a song) the blue line on the bottom goes back and forth very quickly like its in a game of Pong.

At this point I need to know whether this is a hardware or software issue- is it the server or the software. Because I bought my server from Europe I want to do everything possible to make sure it’s a software issue first.

Probably good to add in your network details. Make of router etc so support have the full picture.

Is everything plugged directly into that?

It’s Ethernet into a extender. But the PC works fine. I don’t think it’s a network issue because it literally kicks me off. Here is the screen right now. 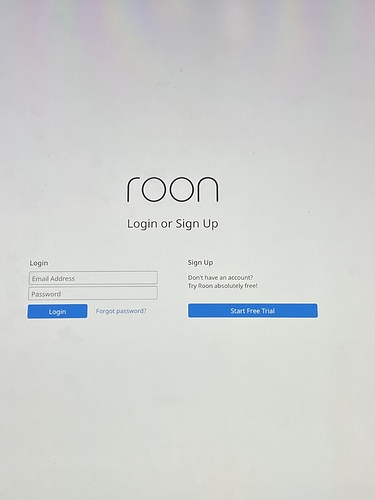 I’d plug everything into the router and see. Roon is sometimes VERY odd when it can’t see the backend servers properly. At the very least it will eliminate one thing for support.

It’s Ethernet into a extender.

I would second the suggestion of trying to bypass the extender and connecting the server directly into the router as a test.

So if I play three or four songs a from one album it is fine, but if I then open up a new album in Tidal or Qobuz or look up a new artist, it then freezes. When it freezes (like when I press play on a song) the blue line on the bottom goes back and forth very quickly like its in a game of Pong.

Does this behavior happen consistently on one album in particular or any new album which was not previously selected?

Can you note the exact local time + date this behavior next occurs?

As far as exact times go, I can tell you I listened to an album for about 10 minutes last night at 8:00 pm before it stopped working. I rebooted the core ( Innuos zenith Se) and shortly thereafter it started working again before stopping about 10 minutes later. It then kicked me off altogether.

Behavior happens when I check either a new album or an album already stored in my library.

Unfortunately I can’t move my router because it is at the other end of the house and it is tethered to the cable modem and satellite. Again I don’t think it is related to a network issue - I can stream x box games onto the PC (which uses a lot more bandwidth than even high res audio) and it works fine.

Now it just doesn’t work at all. Kicked me off. Restarted the core twice. Now I am stuck on this screen. 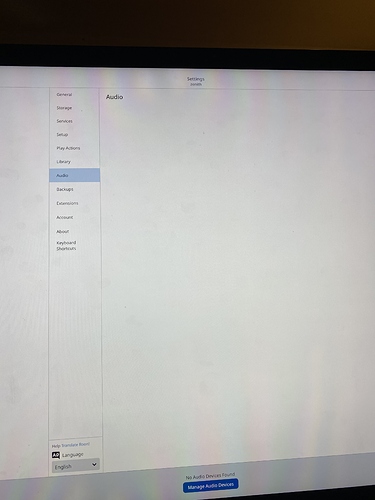 As an experiment, can you restore a backup from before this started happening?
After you backup your current Library, of course.

Or, if you don’t have a backup that far back, can you (just as an experiment) start with a fresh Roon library?
After you backup your current Library, of course.

I’ve enabled diagnostics mode on your Core and what this action does is automatically upload a log set to our servers for analysis.

I’m looking over the log report and I’m seeing a LevelDb.Exception: IO error: No space left on device error message. I believe you ran out of space on your Core’s /var/roon/RoonServer/ location, and it might have left your database in a weird state as Roon kept trying to write files to the database and was failing.

I would clean up some items from the Core - if you’re using the Core to store media, you should move the files over to another media location such as a NAS/external HDD and then setup a fresh database on the Innuous.

I am not certain how Innuous exposes their RoonServer web interface, but it would be a good idea to delete the current database and start with a new one. For specific instructions on this, you may want to reach out to Innuous directly, as I don’t see the Innuous site provide much instructions on this.

It’s weird about no room left on the core because I’m always at like 1 percent of storage.

So I reset my server to factory settings. Installed Roon on the server. Now when I log into Roon it is frozen on this screen. 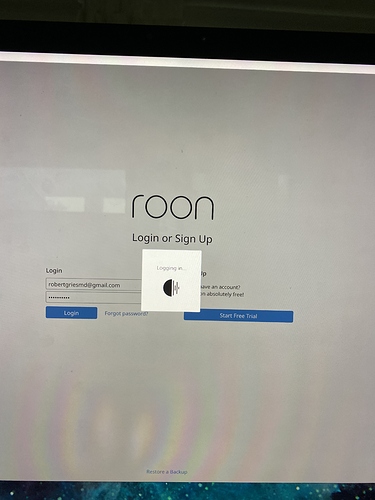 So then I try to log in from my smart phone. I log in to Roon and no audio devices are detected.

Is there a way I can reset Roon to factory settings and start from scratch?

This is a question best proposed to Innuous support, as we don’t have any visibility into how Innuous hosts the database or instructions on their website on how to properly reset the Roon database. I would reach out to Innuous support and provide them this log snippet so they can investigate this issue further:

Is there a way I can reset Roon to factory settings and start from scratch?

As an experiment, can you restore a backup from before this started happening?

You probably don’t have to reset/delete and start from scratch.

When I restored from a backup on the USB drive it still did not work. I contacted Innuos about restarting Roon so I will see how it goes from there

nino from Innuos remotely logged in and fixed the problem this am. He reconfigured the backup directory and that was the problem.

Happy to hear that Innuous Support was able to resolve this issue @Robert_Gries!