Roon keeps on re building music database from scratch

In the last few days, Roon starts re-building its music data base every time I restart. This takes a loooonnggg time given the size of my music collection.
I’m running Roon 1.5 on an iMac w/ Mac Os Mojave.
Music is in a NAS (Sinology DS213+ w/ DSM6.2.1)
Size of music collection is +/- 110K tracks

Hey @Ricardo_Damborenea — Thanks for reaching out, and apologies for the difficulties here.

I’d love to help you take a look at what you’re experiencing here. So we can better understand how your Roon Core is connected to the library on the NAS, can you describe your network, including all networking hardware and how your devices are connected? Can you also share a screenshot of Settings > Storage?

Have you been doing any editing of the file tags on your music library?

Roon has been working flawlessly up to today. I haven’t changed any hardware.

Roon core runs on an iMac. iMac is connected to the network wirelessly. Router is an Airport Time Capsule. NAS is connected by cable 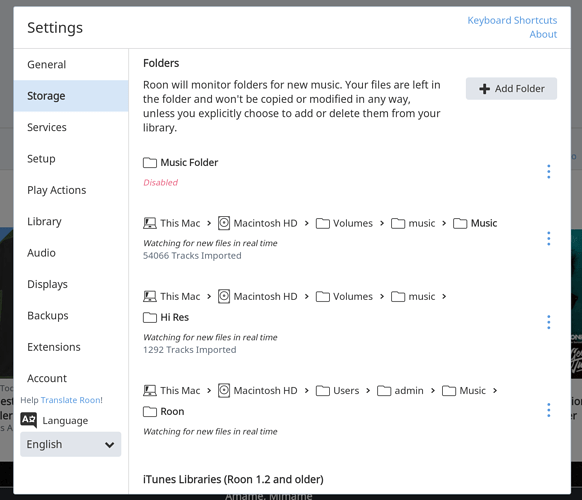 I have edited some files now and then, but not massively.

Thanks for the info here, @Ricardo_Damborenea!

@Ricardo_Damborenea You said your music in on a NAS, but I only see Apple shares listed in your storage, not network based connections. if the connection to your NAS is indeed via apple shares then this is setup incorrectly and should be direct to the share points on the NAS.

See the end of the page https://kb.roonlabs.com/Adding_Folders_Using_Path

Also if you NAS connection is only via wifi your music scanning will never be fast. LAN cable should fix that for the most part.

Can you also detail your MAC specs for the record. and NAS connectivity speed will also matter. 100Mb is really not going to be great. You want Gigabit LAN for both the NAS and iMac connections.

Thanks.
It’s been working seamlessly for 6 months like this (i.e. apple shares, wireless connection). Problem just started a few days ago. Wireless connection is ac and I get 877 mbs on my iMac.

Could it simply be that the Synology is mounted via AFP and not SMB? AFP mounts aren’t supported, so you’d have to enable the SMB service on your Syno and make sure the Mac is set up to mount using the smb protocol and not afp.

Just a thought, but it’s a point easily missed

Thanks!
Yes is AFP mounted. But again, no problem for 6 months. Just now (last 48 hrs) I had 2 episodes of Roon Core re-building the database.
Both AFP and SMB are enabled on the Synology, though

The team took a look at the diagnostics report and I wanted to reach out with their feedback. The team didn’t notice anything out of the ordinary in the tracks — Analysis was being done, but it appeared that this was a part of our standard analysis process.

Did you make any changes to some of your library files on 10/19? Specifically it looks like analysis was being performed for this album:

Is this behavior still occurring?

Thanks for the support

Yes I’ve edited some tracks here and there. No rebuilding of the Roon database has happened since (knock on wood…)

Also -and based on comments in the forum- I’ve moved the Roon Core from my iMac to a headless Mac Mini (late 2009 - 100% dedicated to Roon; no other task) wired to my router. I also mounted the NAS using SMB and not apple shares.

I have had some issues with the Mac Mini with music “stuttering” when playing hi res files that I thought were caused by low RAM (2gb). I’ve updated RAM to 8gb today and now everything seems fine.

What I feel is Roon seems to include nearly all but not all of the music on my NAS. It’s difficult to say what’s out vs in on a +100k collection, but… As an example I was listening the other day to “Everything But The Girl” and just 5 or 6 albums appeared in Roon as part of my collection, while I have +10 albums. I re-edited all albums and they re-appeared in Roon. My back of the envelope calculations tell me maybe 5-7k songs that are in my NAS collection do not appear in Roon.

I don’t know whether this might be an issue or not, but the way I add and edit music for up to 24/96 files is using iTunes. iTunes manages and organizes the music database that sits on the NAS. Roon “reads” form the NAS. For higher res files, I simply add folders to the NAS library and Roon adds them to the library.