Some more news about partnerships ahead of CES.

Along for the RoonReady ride comes digital audio compatibility of up to 24-bit/384KHz PCM and DSD as well as streamer grouping for multi-zone, fully-synchronised playback.

As per yesterday’s announcement, AURALiC is slated to be the first RoonReady manufacturer. Roon code will land on their Aries and Aries LE (but not Aries Mini) streamers via the Chinese company’s next update to Lightning DS v3.0, (hopefully) arriving in January 2016. Before that, AURALiC CEO Xuanqian Wang will demonstrate his devices’ new Roon streaming capabilities at CES.

Broadening our outlook, software updates from IQ Audio, Small Green Computer, and Sonore, that will certify their devices as RoonReady, will reportedly land this month also.

The question that looms large for this commentator is this: does RoonReady not obviate the use of each manufacturer’s own software?

Looks like some really good names lined up so far. Cant wait to see what else is announced.

… and many many more are on the way. Don’t ask who, as we can’t leak their future announcements!

The question that looms large for this commentator is this: does RoonReady not obviate the use of each manufacturer’s own software?

Of course it does :).
At the same time there will probably be a few things holding them back for now:

For the more high end manufacturers this is a really great opportunity to lose a headache and gain a competitive edge!

For the more high end manufacturers this is a really great opportunity to lose a headache and gain a competitive edge!

This is what we are hearing from the manufacturers over and over. Building a good client costs millions of dollars, many years, and does not use the expertise in DSP/electronics/psycho acoustics that these companies already have.

That said, even in a perfect Roon world, I still see the manufacturer apps doing configuration.

Crossing fingers for Devialet Phantom integration, even though Devialet are very protective of their own Spark solution.

As far Devialet, if Roon becomes ubiquitous in the high end, maybe they will be forced to reconsider their approach.

Very disappointed about Aries Mini, especially considering Auralic promotional material touting the use of the same engine as Aries. Fortunately I held off buying until the cake was baked. Does anyone have any insight as to whether AuralicAuralic will NOT support Roon on Mini or it is a delay to get the top line out the door first followed by the Mini in a month or so. I have no desire to go down NUC/PI endpoint rout - I want an appliance and integrated as possible.

@PNCD – I’m sure you can email Auralic to find out about the status of RoonReady on the Mini. I know the answer, but I can’t answer for them.

I think I know what this means, but would to hear you elaborate. And for you to say if these are envisioned for this quarter, this year, or in a future beyond 2016.

Where as RoonReady devices are networked audio outputs/renderers/endpoints capable of speaking to Roon via RAAT, RoonServer appliances would be media servers that either already exist or are being developed specifically to run RoonServer.

I think the first should be at CES or soon after, and new manufacturers will trickle out devices over the next year.

I expect these appliances to have cleaner power supplies than your standard mac mini or nuc, and nicer built in audio outputs (or none at all), and maybe some storage (or not). Obviously you can build these appliances yourself, but the entire point of the appliance is that it is a turn-key solution.

Very disappointed about Aries Mini, especially considering Auralic promotional material touting the use of the same engine as Aries.

@PNCD I’m pretty sure I read in one article that they will have the Aries at CES, and the mini will follow later. For the life of me I can’t remember where I read it - there’s a lot of Roon / RoonReady chat out there at the moment!

@danny that is great news and can’t wait to see what is coming next, but it raises the question about the subscription model.

Will these appliances come with a Roon license ? If they do, what about those who already have a subscription (lifetime or yearly) ?

Danny I misused ‘appliance’. I do not mind managing the Roon server and am not looking to put that into a more or less limited Elac-like box. What I do not want is a downstream stack of network server (Aries) connected to a DAC connected to an integrated amp. Too many independent boxes, cables, interconnects and family members have no clue on how to distinguish or troubleshoot the stack. So a Mini plugged into a power amp with volume control in Roon works or a Mini plugged into an integrated amp with a remote works. This is also why I have the files on a NAS next to the server - visibly computer boxes as opposed to Aurrender which adds to the confusing stack. It is important that someone trying to simply play music can understand the chain, check if the lights are on, reboot if necessary. I would have no chance explaining that photos and videos are in the computer box but a special Aurrender box contains the music files. You get the picture. So I think a Roon approach that gets close to network device dictatorship is good (status, reset, update, volume select, source select).

It sounds like you and i are looking for a similar device. While i don’t have to worry about others having to deal with troubleshooting, i am at the point where i don’t want to deal with it myself, which is why i haven’t bothered with a Pi or the like.

I have three systems in the house, the HT in the living room, a bedroom system and my main system. For the first two places, what i want would be somewhat akin to a new squeezebox touch. I want a simple device i can plug in to my integrated/receiver, connect to my network, pull up Roon and output music. A display would be ideal, but even then not necessary, heck for the living room the release of an intel compatible Roon app would easily suffice for my nexus tv.

For my primary system right now i am using a laptop with Roon running on a NUC for the server. that setup is pretty good for now as it allows for some remote controlled playback but once Roon speakers is released i’ll see what is available and if someone makes a range where it could prove to be an ecosystem of endpoints for all of my location.

To your first question it seems some will, or at least a version of it as the Discovery has a server install, though there may be some concern with future updates as i think i saw it is a custom version of Roon. Im sure there will be other server products. For those who already have a license for Roon, the endpoint solutions would be the way to go.

@Patrick_Silani: I predict most vendors will let you bring your own membership, as it lowers the price of the product.

@PNCD: What you want is also what we want. One part of RoonReady certification is to make sure the volume is integrated and it is integrated properly for best quality as dictated by both sides.

Great, Danny, but the job will not be done until you can display status, identify problems, manage updates etc. in most family homes now we are talking about at least two main systems in shared space plus bedroom systems, often with lively teenagers. It is often the old tucker who manages these quite complex networks that combine dedicated LAN, PowerLine, WiFi of various types, Apple personal electronics and specialist hifi. Just as Roon can integrate libraries, Tidal and (hopefully) other streaming services so it must also allow individual users to manage the network without getting down on their knees and a reaching around to the back of a black box to see if the cable has come loose. Multi-user, multi-brand, full home digital audio management is not for the faint heartedly! My concern, for this goal, is that RoonReady is about you distributing music but not managing music distribution. Hopefully that will evolve.

Thank you, Danny.
I am happy that I waited to confirm things before making a purchase - usually I rush in! I will keep an eye open for what CES reveals as a solution.

Spotted at the Bryston suite at CES today… 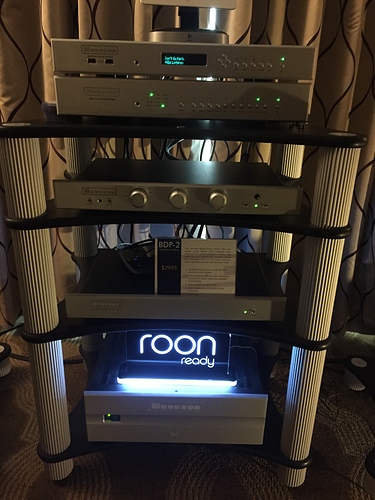 I didn’t see it in use, but it sounded like they’re getting close. It’ll be pretty compelling with their network player and the BDP-3.

RoonServer appliances sound very interesting indeed.
Looking forward to the announcements! I am sure the first to market will get a decent edge. I bet they know that

Do you think so?
When I talk with people, they have no awareness of Roon at all. I expect that the Roon users to date come from a core group of computer audiophiles who read the audiophile press and blogs. There is a far larger universe of people who spend money on regular equipment but use Bluetooth, Airplay, UPnP. Roon should be the natural replacement for UPnP but so far not I have not seen much sign of those firms adopting RAAT. I do see Roon adopting Songcast rather than Linn adopting RAAT. Even in the core computer audiophile world adoption is patchy: Auralic is part in and part out. Aurrender is on the sidelines. Melco?

The Roon appliances idea is probably not going to appeal to the core audiophile group and it may confuse things with limited/differentiated capabilities (like Elac) that create more confusion by forcing the question of what Roon capability is being purchased.

So I am not so sure that Roon is going to change the world so much as becoming another player in a fairly well-defined niche of computer audiophiles, separate from the (large but declining) HiFi market of well-known consumer brands. The most direct competitor is probably J River. I hope that it is enough to support Roon because, for us, they offer a valuable solution for which we pay a good amount of money.