As these discs are first imported Roon scratches its head and takes awhile to display them but then presents it as one album with duplicated track numbers.

In itself this is a puzzle as CD2 has the first track nominated as no 18, next 19 etc but Roon ignores that and renumbers them 1, 2, … etc

So, with editing the tracks are re-numbered correctly and identification done. Yes Roon finds the work and agrees the tracks are now correct but upon “Save” hashes them all up again and pronounces it as “unidentified”.

So, as it stands now, no extra data can be associated with this release if the tracks are to be retained in their correct order with it as one album, not two .

Someone fix this please.

John, no sensible tagging mechanism has CDs which do not start at track number = 1. If this is how your tracks are tagged, I am not surprised that Roon is struggling. We are certainly not going to change anything to accommodate such tagging.

The Roon metadata for this album are good - very good in fact. Please ensure that:

IN ADDITION, the directory structure must be something akin to the following in order for Roon to group all of the tracks correctly into a single album:

The following will cause problems:

John, no sensible tagging mechanism has CDs which do not start at track number = 1.

But what John has done is simply ignore the CDs within the release and number the tracks from 1 - N. The logic behind this (especially for Classical music) it that CDs can create artificial boundaries (80 minutes) that have nothing to do with the intent of the composition. Its clearly incorrect for track 1 of CD2 to be set to 18 rather than 1, but I do think there is a case for storing the contiguous trackno as if the release consists of a single disc, (that is why SongKong writes such a field called SINGLE_DISC_TRACK_NO (Flac) to releases).

The other issue is that rippers that lookup cds from Gracenote/Amg (such as Naim UnitiServe) do this on a disc basis and therefore organize multi-album releases as a series of single disc albums rather than a single album comprising multiple discs, so for some users a disc is analagous to an album.

I think there is an argument for getting ROON to understand when a user has done as John has done as it is quite common, especially since many users are aware of the TrackNo but not the DiscNo field

I do not really agree. Roon’s job is to identify a release as it was released, (i.e CD 1, CD 2, etc.). There are too many personal methodologies to account for them all. However, once identified, Roon should and does provide the flexibility to organized as you wish, turn multi-disks into 1 Disk, or turn 1 Disk into a muli-disk.

he logic behind this (especially for Classical music) it that CDs can create artificial boundaries (80 minutes) that have nothing to do with the intent of the composition.

Which is why Roon has a composition View. In this view, if I play a Mozart Symphony that just happens to fall at the end of Disk 1 and continues on Disk 2, it will play the piece as a whole ignoring the physical divisions of the original CDs.

Which is why Roon has a composition View. In this view, if I play a Mozart Symphony that just happens to fall at the end of Disk 1 and continues on Disk 2, it will play the piece as a whole ignoring the physical divisions of the original CDs.

To clarify I’m not saying its needed for Roon - I was just listing some reasons why a user may have (incorrectly) tagged their multi disc releases in this way.

Ahah, I see the basic problem was the dBpoweramp ripper treated each album as 1/1. So I rippedcagain making each disk 1/2 & 2/2. They then appeared in Windows Explorer as two distinct albums.

Copied across to Roon they took an extraordinarily long time to appear but did so as recognised albums which were merged as two albums - no point in forcing them into a single one.

So Roon is not dumb, just some of us using it need to be more aware of how multiple disks are ripped.

Yes, it’s always a good idea to first check what dBpoweramp is going to set as metadata before rushing to click the “Rip” button. Some adjustments may well be needed. I’ve learned that the hard way…

dBpoweramp allows you to set “Profiles”. I have a single-disc profile and a multi-disc profile.

dBpoweramp allows you to set “Profiles”. I have a single-disc profile and a multi-disc profile.

I knew that dBpoweramp allows profiles, but I’m at loss how your single-dics profile vs. multi-disc would look like 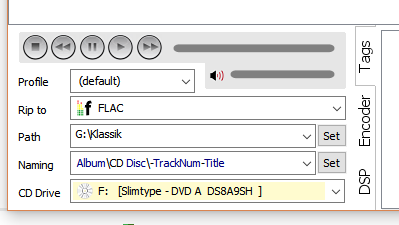 What else can you define apart from the fields in my screenshot above? 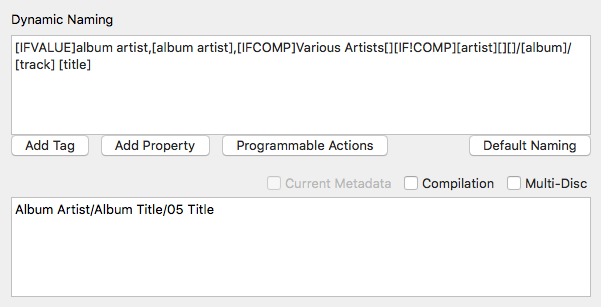 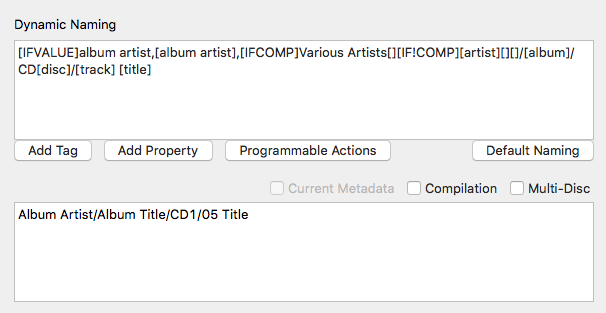 Can’t remember if metadata settings are remembered on a per-profile basis. Certainly on PC (where I did the vast majority of my ripping) I didn’t write a disc number tag for single discs. For multi-discs, I certainly did.

The key thing with dbPoweramp is always to review the metadata before ripping - make sure that the disc and total disc numbers are correct. I’ve often found 1/1 on one disc and 2/2 on another, or 1/2, 2/2, and 1/1 on the third disc…