I am looking for help with a metadata problem

I have an unidentified CD [Amadeus Quartet, Brahms: String Sextets Nos. 1 & 2] where Roon misidentifies the first work “String Sextet No. 1, Op. 18” as another work by Brahms “Theme and variations, for piano in D minor (after sextet for strings, Op. 18)”.

Admittingly, the variations are more popular […] but I like Roon to correctly identify the work as the Sextet No. 1.

I have put in dedicated WORK/PART tags and also set the Metadata Preference to File rather than Roon, but Roon continues to stubbornly misidentify the work.

Any suggestions of what else I could do? 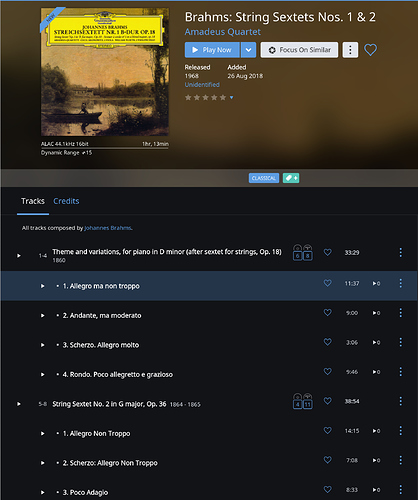 That is how allmusic writes it:

String Sextet No. 1 in B flat… | Details | AllMusic

Find composition details, parts / movement information and albums that contain performances of String Sextet No. 1 in B flat… on AllMusic

I don’t have your album but I have an Amadeus Quartet box set and that works. I find this sort of miss-identification relatively common. Mostly a cut and paste from allmusic seems to solve it. Often it is where there is a level of ambiguity with the opus number (as in your case). But it also happens where there are competing catalog number systems, often for very famous works. I have had a lot of trouble with the Debussy Etudes and Preludes. Roon seems to require two catalog numbers to make a reliable identification. E.g.:

Tony, thanks for the help!

Indeed, using the allmusic names helps a lot in getting Roon to correctly identify classical works. I have had the same issues with Debussy as you did and taking the exact names from allmusic fixed it

I was looking for a way to stop Roon identifying the work automatically and let me decide how to identify the work, through eg the composer / compositions view.

The problem here is that your album is unidentified. When this happens, we do our best to identify the composition and match it to any existing compositions in your library. Unfortunately, we appear to have picked the wrong one. We are investigating ways to do better here in the future.

Dylan, thanks for your help!

Fully understand. In 99%+ of the cases Roon does indeed do an admirable job in identifying the work correctly when the album is unidentified (i do have lots of those, especially classical). I don’t know whether it is ever possible to get to 100% through algorithms. I guess what I am looking for is a way to correct Roon by hand in those rare cases where it gets it wrong … I can merge compositions if Roon is stumped, I just haven’t found a way to correct Roon, if it misidentifies the work.

Ah! When that has happened to me I have removed the opus number so roon will not recognize it. If you are lucky it will still show up in the composition editor and then you can merge it with what you want.

If it is a multi-level composition like this then roon will put the opus number back in. Unfortunately with single part compositions it will not.

If it is a multi-level composition like this then roon will put the opus number back in. Unfortunately with single part compositions it will not.

Technically, yes you are correct.

But from a user perspective with a single part composition in this scenario you end up with two choices.

I have raised this issue several times that multi-part and single part compositions are treated differently and this leads to issues/confusion/paradoxes. This is yet another use case.

Choice 2 is just the best of a bad job. Opus and or catalog identifiers may be important to you for a number of reasons.

Thanks for the clarification. I realize that this may be a far from perfect solution, but does WORK/PART tagging help you with single part compositions (or single track performances of a composition) in this scenario? i.e. Tell Roon the WORK name (sans opus/catalog number), but leave the opus/catalog number in the track title.

I think that tip probably works for single part compositions. I wasn’t able to test with opus numbers but that technique seems to work with catalog numbers. I find this to be a relatively common occurance with some composers.

With a lot of Debussy works there are dual catalog numbers. But it can be quite random which one the public databases use or even which ones are on the back of the CD. Allmusic (and roon) adopt a convention of using both catalog numbers to uniquely identify the track title. So for example roon got all the Debussy tracks in this (unidentified) album wrong. That is roon linked to completely the wrong compositions, although because most of the compositions are single part (so the text display was correct) this went unnoticed until I noticed that radio was giving very unexpected results when seeded with this album. I had to edit each track with both catalog numbers to get a correct ID. So for example the Golliwogs Cakewalk (L. 113) was auto-confused with Dances Sacred & Profane (L. 113) by roon. 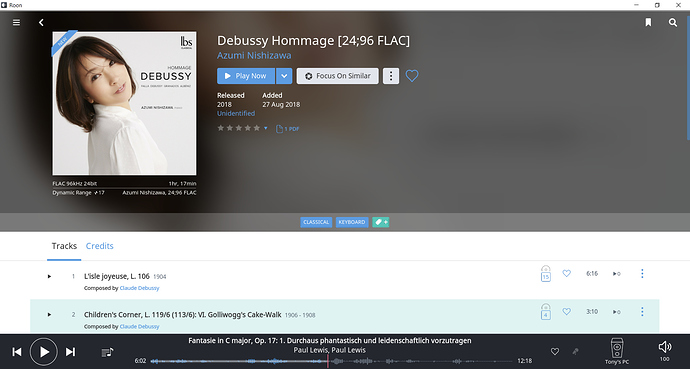 I tested your tip with this example and it worked. That is I kept L. 113 in the TITLE track and removed it from WORK. Roon removed the auto-link to Dances Sacred & Profane. And I was able to merge the unidentified composition to the Golliwog’s Cake-Walk correctly in the composition editor. As it happens I decided to add the second catalog number to the TRACK title anyway and that also works (with less manual editing steps).

Good to know. Thanks!

I have noticed a similar problem with Beethoven’s “Symphony No. 2 in D major, Op. 36” and the “Piano Trio in D major (transcription of Symphony No. 2 by composer), Op. 36”.

Rather than having to go in this case into five unidentified albums to remove the Opus numbers and then reassign them by hand in Roon, is it possible to reassign the works directly in Roon 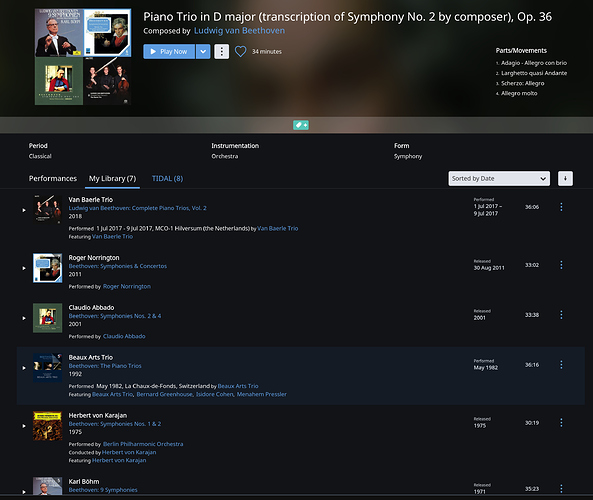 This is extremely common. I have also had a lot of trouble with Dvořák. Here is a quote from wikipedia:

I am not sure if there is anywhere that these sorts of inconsistencies have been collected together for reference. But there is an interesting discussion on wiki with a random collection of composers:

In musical composition, the opus number is the "work number" that is assigned to a composition, or to a set of compositions, to indicate the chronological order of the composer's production. Opus numbers are used to distinguish among compositions with similar titles; the word is abbreviated as "Op." for a single work, or "Opp." when referring to more than one work. To indicate the specific place of a given work within a music catalogue, the opus number is paired with a cardinal number; for examp...

Automation of such an open ended set of composition assignment rules over the entire universe of compositions seems a very long way off to me. IMSLP, allmusic etc. are often quite patchy once you step outside standard repertoire. Better manual support in roon would be welcome whilst waiting for automated solutions which look so far off.