I’ve always loved that Don Giovanni as well, which was recorded after a run of performances at Glyndebourne, a summer festival on the Sussex Downs.

Two years after it was released, I had the good fortune to perform in the same production, with many of the same singers, and Haitink conducted. I don’t remember much about his personality, but he was a wonderful musician.

As a young person, of course, I also had encounters with classical music, but it was not dominant. Nevertheless, I remember about 50 years later a wonderful Bach interpretation in Hamburg, which I happened to perceive with my sister. We decided to stay spontaneously and had an hour of extraordinarily emotional moments. There were no musicians of world renown and no recordings were sold. Nothing lasting in my collection, only the memory of dreamlike music.

This experience was repeated over 40 years later in my village church.

An unknown, still very young girl (maybe 14 years old) played the violin solo in front of about 50 people for the association Kunst Kultur und Kirche in such a dreamlike way that I would have liked to take CDs with me, but again there were no recordings for sale.

This young talent was visibly interested in classical music, not yet employed and spent with the mother your vacation in the camping bus. It was the day before, by the way, that I decided to give away all my LPs, CDs and cassettes. I built up a wallpaper table at the property line and carried out one box after the other. Had good conversations while giving them away and as luck would have it, this young woman is now in possession of my classic CD collection. Probably still playing them today in the camper. I didn’t have much vinyl to give away in this genre.

With the music services, this genre also comes back to me more. The own small collection and the many tips here help. I also like the soft sounds in the direction of morning mood, there come Lilya Zilberstein / Gothenburg Symphony Orchestra / Neeme Järvi just right for me and here I find over 100 alternatives. I first turned to Leif Ove Andsnes Grieg: Piano Concerto; Lyric Pieces, Opp. 43 & 54. Today the link and the concerto are enough for me. Even though my collection is large, the new feature is to help with discovery and linking. In a few years I may not use hard drives either. I still think a lot of being independent from the internet. But this presentation only works with Roon and internet. My first selection is Lang Lang 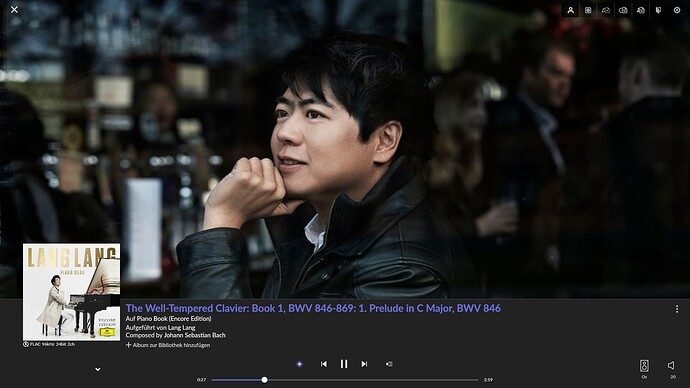 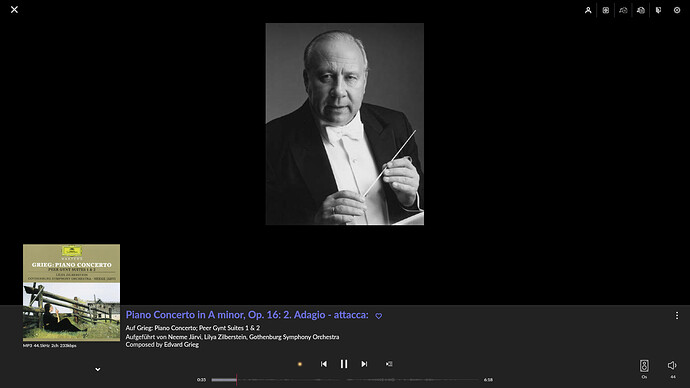 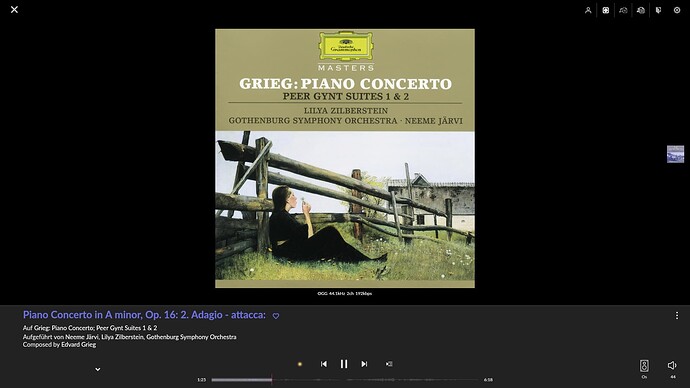 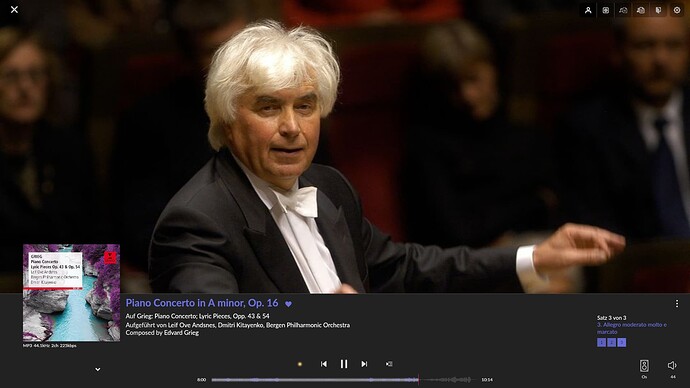 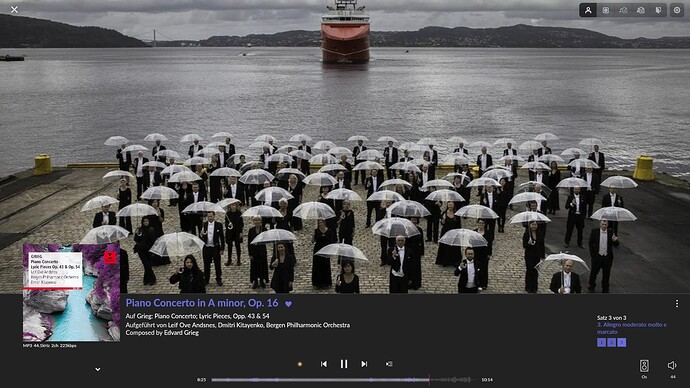 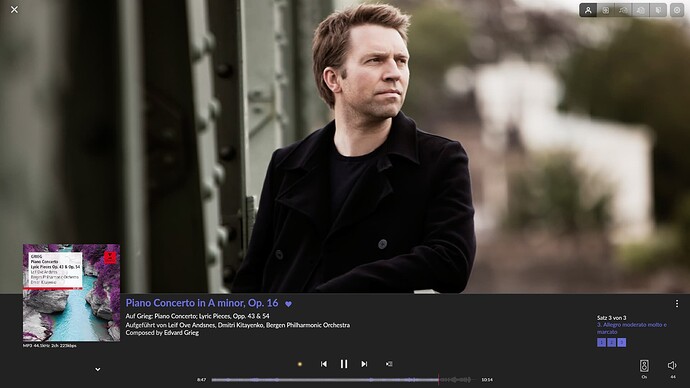 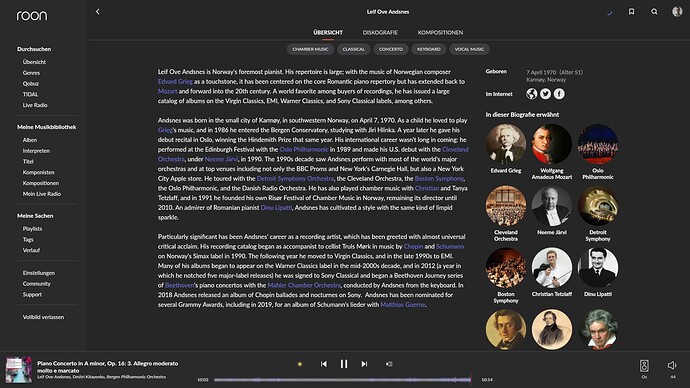 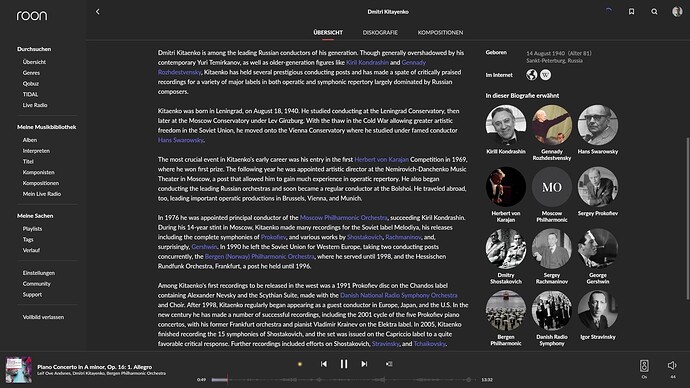 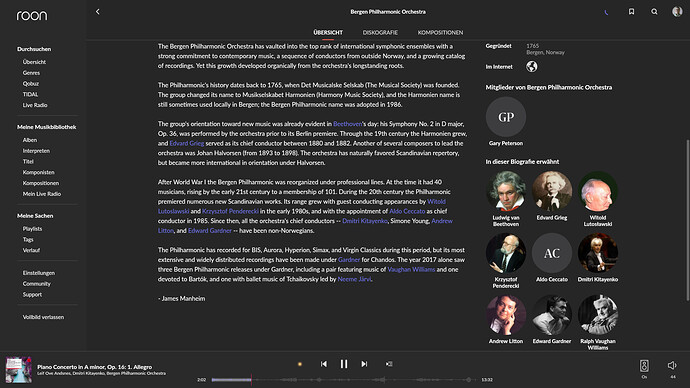 Thanks so much.
I found almost all recommended albums. Unfortunately, I cannot find the Bernard Haitink Symphony on Qobuz. Any idea where I can get this?

On the streaming services you’ll have to look out for reissues. On Tidal, for example, the Haitink cycle of Vaughan-Williams Symphonies is available as a Warner Classics reissue: 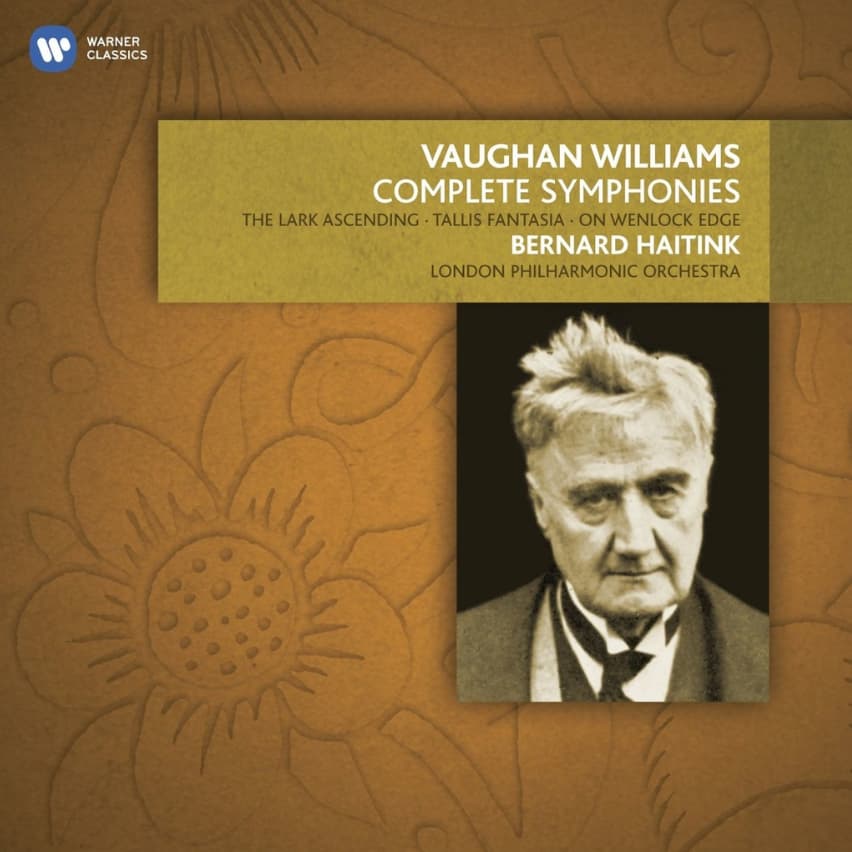 It’s also available on Qobuz, at least in my country. You just need to bear in mind that many of these albums have been reissued multiple times with different covers. I recommend you search by conductor and composer for best results. 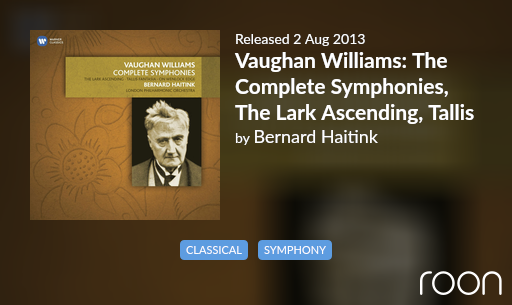 Thanks, I got it. But will it be the same recording?

But will it be the same recording?

So sorry to hear that Bernard Haitink passed away this week.

His Rachmaninov piano concertos with Vladimir Ashkenazy from the mid-80’s were regarded as definitive for many years. They were my first introductions to classical music at that time. 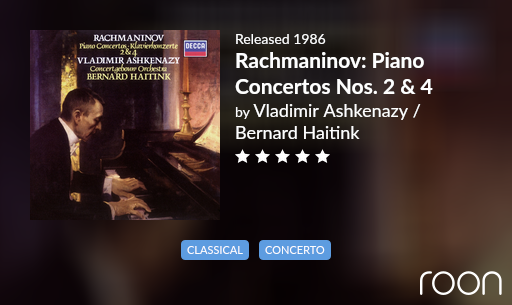 Thank you, now is this introduction playing for me.

Vladimir Ashkenazy’s recordings are actually a great way to ‘get into’ classical music. His recorded repertoire is vast, and deep. And it ranges from everything to Beethoven to Shostakovich.

Another favourite of mine is his Beethoven piano concerto cycle with the Cleveland Orchestra: 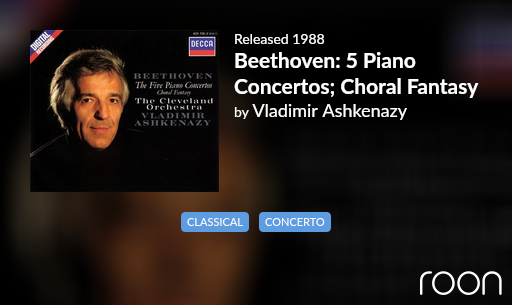 We have such great recommendations here in all genres and I am so interested but it is impossible to follow them all. After the first good hit, I’m motivated to put a few of Andreas’ recommendations to the back and go straight to Vladimir Ashkenazy here. Sounds appealing to my old ears.

@Andreas_Philipp1 is always laser accurate with his Classical recommendations. I could build an entire Roon Listeners playlist just by using his suggestions!

Yes, exactly… we need a way of sharing playlists within Roon!

EDIT: Let me say more… when some shares an album in the forum from their Roon collection, I should be able to click on it and have it open in my Roon and locate it on Tidal or Qobuz and if not at least launch that search. Make it EASY for us to share across Roon users, from Roon to Roon.

Make it EASY for us to share across Roon users, from Roon to Roon

The 1st step would be this and everyone from the community can help: 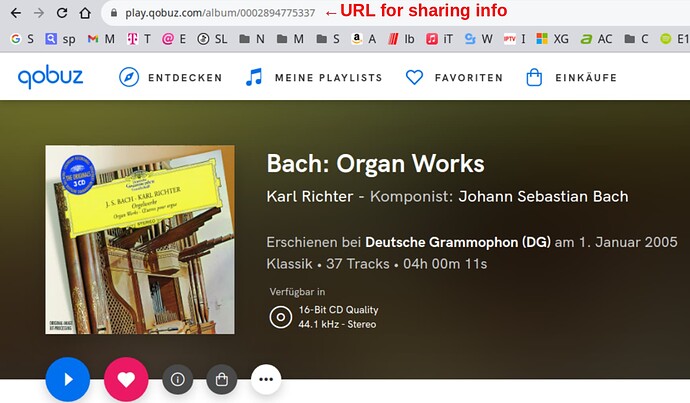 I’ve always got issues with the Qobuz links. They only seem to work sometimes. Have a feeling it’s related to different language versions of their site… with this link I just get a blank screen

It’s not your fault @Uwe_Albrecht

I get that it is possible to share Tidal and Qobuz native links. But Roon software has that information too and has a Share function. So putting a plug in for Roon to facilitate this and take advantage of the vast knowledge in the community here!

Also, on the Tidal previews, it is frustrating that Tidal does not show the content of what is being shared like an album image etc., you always get the same Tidal preview:

his repertoire encompasses his work as a soloist and conductor. it’s also uniformly well played, and for the most part excellently recorded.

I just made a truly amazing and highly acclaimed Bach rediscovery:

Midori Seiler has been in my library for almost 10 years, and yet it has received less attention than popular music of other genres until now.

This community has made it easy for me to reconnect here with great recommendations. I hope the highly talented artist pleases not only in your Bach performance.

Midori Seiler has established a multifaceted career on the concert stage, appearing as soloist, chamber player, and concertmistress with several major orchestras. She is one of the busier violinists in Europe, not simply because her highly successful concert activity has also led her into the recording studio, but owing to her teaching duties at the Liszt School of Music in Weimar and her schedule of master classes at various European locations. Not to be confused with Japanese-American violinist Midori Goto, who generally uses just her first name, Seiler typically performs on period instruments and has achieved acclaim for her incisive interpretations of Baroque repertory, particularly works by J.S. Bach and Vivaldi. But she has also received high praise for her Mozart, Beethoven, Schubert, and for her solo work in the Rimsky-Korsakov Scheherazade. Seiler has often appeared in concert with pianist Jos van Immerseel and has concertized throughout Europe, the Americas, and Asia. She has also made numerous recordings, mostly for Harmonia Mundi and Zig Zag.
Midori Seiler was born to a Japanese mother and Bavarian father in Osaka, Japan in 1969. Her parents, talented pianists both, raised her in Salzburg. Seiler’s first advanced studies were in Salzburg with Helmut Zehetmair and Sandor Vegh. She had later studies with Adelina Oprean at the Basel Conservatory of Music, and with Thomas Hengelbrock at the Schola Cantorum, also in Basel.
While studying in Basel Seiler was concertmistress in the Swiss Youth Symphony Orchestra. She had further studies with David Takeno (London) and Eberhard Feltz (Berlin). From 1991, Seiler has served as a member of the Akademie für Alte Musik Berlin, becoming the ensemble’s concertmistress in 2000, a post she still holds. She serves in the same capacity with Anima Eterna, the period-instrument ensemble led by pianist/conductor Jos van Immerseel.
Seiler and van Immerseel collaborated on a disc of Mozart, Les grandes sonates viennoises, on Zig Zag, which received the prestigious Diapason d’Or Award in 2002. In 2005 Seiler appeared in Carnegie Hall in an acclaimed performance of the J.S. Bach Concerto for two violins, with violinist Georg Kallweit, and the Akademie für Alte Musik Berlin, part of the ensemble’s first tour of the U.S.
From 2010, Seiler has served as professor of Baroque violin and viola at the Liszt School of Music in Weimar. Among her most important recordings is the highly acclaimed 2011 Berlin Classics CD of the Bach Partitas for violin solo, No. 1, No. 2, and No. 3. 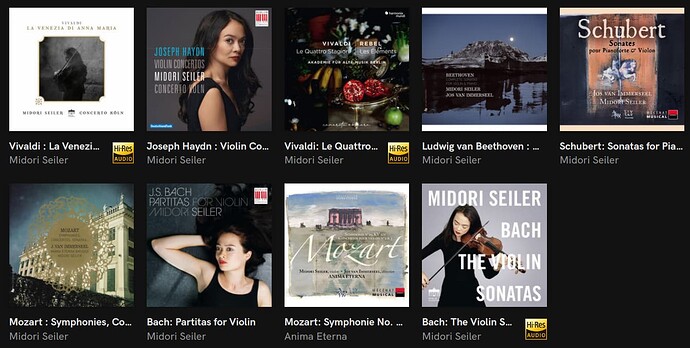