Roon needs to sort it classical music meta data out

I have exactly the same (perfect) ripping and tagging process using EAC each time I rip. If something has more than 1CD it is pure luck whether Roon will ruin it or not. And its even randomly avoiding displaying artwork which is embedded (even though I have my settings to “prefer file” over “prefer Roon”. What the hell is going on? Its so incredibly annoying

By way of another example, I have a perfectly ripped Beethoven Piano Sonata box set. In Roon it shows as “unidentified” Won’t even pick up the composer tag?!

It is frustrating. I hope the developers will continue to improve handling in this regard over the next upgrades. Re album art: One REALLY good idea I saw posted would be to allow users to select the primary album art by long pressing any item of artwork visible for the album. I hope they implement this. The dealing of metadata is a real head-scratcher!

Yeah. What is the standard way to pin album art when none is shown yet some is either within the meta data or the folder of the rip?

Not sure. It follows some protocol, but I wouldn’t like to speak out of turn. The handling of metadata and art is the weakest part of the Roon experience.

I am experimenting to try and find best solutions, but it’s a slow process. I love Roon, and am fully invested in the project, however. I hate to criticise, and would like to see marked improvements in this area.

if you actually share some examples with screenshots some of us here may be able to help.

I understand how frustrating it can be but your opening post implies it’s all at Roon’s end the issue is and I have found out many’s the time it is usually a mixture of my failure to fully understand how to work Roon as well as some deficiencies in Roon. If you supply details you may get some help with the former.
But it’s never a great idea to tell someone their baby is ugly.

with respect to album covers in the edit album screen you can choose Roon or your own metadata for the album or add your own art as in this example where both Roon and my metadata art was incorrect. 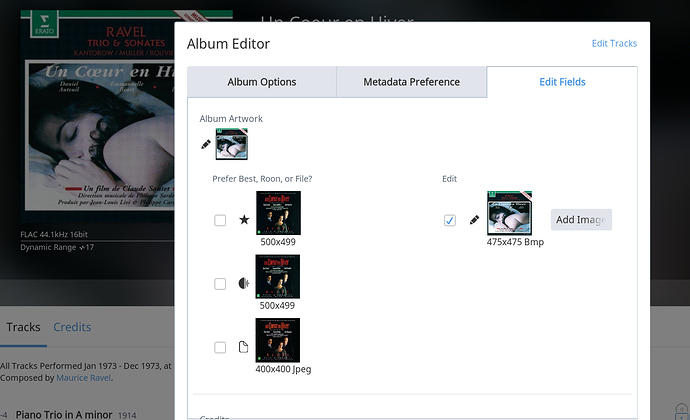