The Roon app on the Mac running the core, as well as Remotes (iPhones) no longer see the KEF LS50 wireless speakers. I know another user has this issue but that thread was closed.

I did not see a solution in the old thread. I can play to the KEFs using the KEF remote and Tidal, but not using Roon. I can also see them in Spotify and in mConnect.

Why would Roon no longer see them? They are the main reason to have Roon… I may just have to quit and use the other apps instead…

I had this problem a few months back. Here is how I solved it. Make sure that the KEF are turned on and on the correct input. Then power down your Core machine and then power it back up. Something in the power down/power up sequence must trigger a rediscovery because it was only then that I could recover my LS50W.

Hm… okay, the Mac mini is a server and doesn’t reboot often enough maybe. I’ll try this but it seems odd to need to do this after it had worked well for a while…

Did the suggestion from @John_Aiello work for you? Thanks.

I have seen an issue where a Mac going to sleep is causing audio devices to disappear. Can you please check your energy saver settings and try to mirror mine? (note, this is a screenshot from 12.6 and I am now on Ventura).

At any rate, if rebooting is fixing it, I think the precedent I cited is relevant. In Roon 1.8 we were somehow keeping the Mac from sleeping and due to the changes in 2.0 we seem to be respecting those settings now.

Other users have also used an application called amphetamine to keep their Mac alive for this same issue. 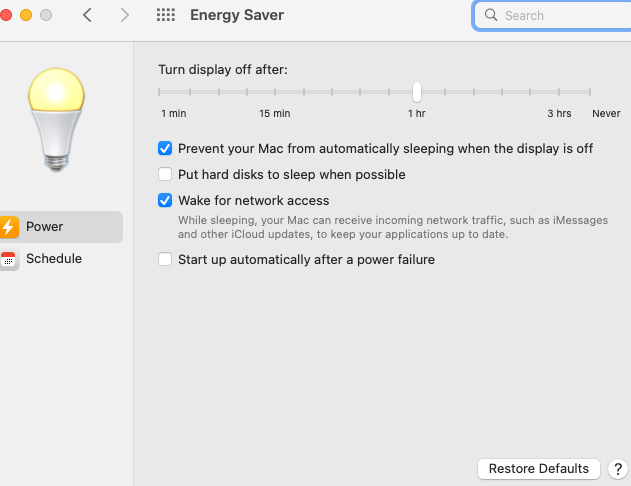