Roon not adding all files to library

I’m having trouble adding all my files to my Roon library.
Musicbee shows me that I have 45742 tracks in my library. All files are in the same directory on my NAS. Roon has only found 45490 tracks in that same directory.
I’ve tried multiple rescans. With such a large library I’m finding it hard to even know which files aren’t on the library; though I have found one album (Dezron Douglas & Brandee Younger - Force Majeure).
After searching on the Roon forum, the files have no problematic characters in them (for example ; /). The music is a flac file, 24 bit 44. I’ve tried removing the folder from my music library, rescanning then adding it back and rescanning. No difference.
The whole thing is quite annoying, as I don’t even know which other tracks haven’t been added.
Thanks for your help!
Theo

EDIT: The files are not showing up in the skipped files section, where there are only 3 files inexplicably skipped (they work fine on Musicbee…). The reasons given for skipped files:

Do you have show hidden tracks set to off? 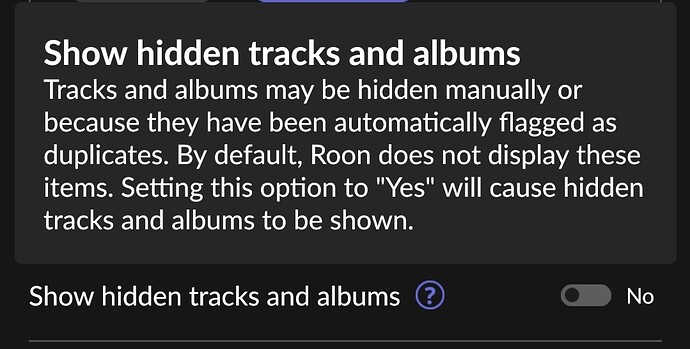 Thanks for replying. Show hidden tracks is set to on.

Any ideas? Thanks for your help.

All files are in the same directory on my NAS.

Just for clarification - are you saying that all the 45742 tracks are in a single directory? You don’t have them split into artist/album folders?

Yes sorry I wasn’t clear. The tracks are meticulously (

) split in to folders: Music/Album Artist/Album/DiscNb-TrackName.flac
When I add music to my library, I add via Musicbee, change any metadata which isn’t correct, and Musicbee then automatically reorganises my files in that hierarchy.

OK, thanks for the clarification. You say that the files have no forbidden characters in the filenames - is this also true for folder names?

I recall that I had to change the name of the ZZ Top album folder, “Recycler” because it got ignored based on similarity to RECYCLE folder which is ignored.

OK, so I’ve finally managed to add the album to the library. I used audacity to open the file, then re-export it as a new flac 24bit file. Deleted the old files, added them to the library and they appeared.
So that means that there was a problem with the file in Roon (it was fine in Musicbee), which leads me to 2 questions: