Naim NDX5 hooked up to Nucleus+ by wifi

On this album (People, by Barbra Streisand), Roon only imports one (Track #2) out of the 12 tracks on the album.

Screenshots below for your reference. I’ve tried restarting Roon Server Software, but the same issue occurs.

Any thoughts pls? Thanks a lot, 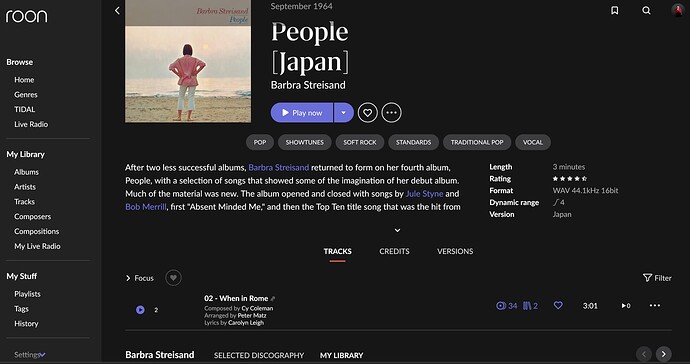 You can try the various troubleshooting guides (FAQs) and report your findings here to speed-up things.

FAQ: There are some tracks missing from one of my albums, how do I find them?

Locating missing tracks If an album is missing tracks, the first step should be locating the missing tracks in Roon. In the event that the tracks were imported to Roon but not grouped into the album, you can locate these tracks using the Find Tracks...

Thanks BlackJack! Tried both the track search and the rescan–no luck. Hope Roon can provide some insight

Tried both the track search and the rescan–no luck

Please click on the document titles, highlighted in a blue color, to follow the links to their origin and read the documents in their entirety. There are more than only two troubleshooting steps described.

More than likely Roon has split the album into different albums and they need to be merged back together.
I would go to Settings/General and turn Show Hidden Albums to ON, this will make it easier to see if this is what is happening as serveral “People” albums would show up. Also, I would look under Versions, and see if the other parts of the album are there.

Thanks Daniel! Did the trick when I turned “Show Hidden Albums” to Yes.

Not sure why Roon would classify it as a hidden album?