I’ve discovered that Roon has skipped (?) about 600 files (30 or so albums) from my watched music folder. I use iTunes to manage my files (since I still sync bought albums to iPhone), and have Roon watch one of the internal folders there. I use a Mac mini 2012, Mac OS 10.13.6, latest Roon (updated this morning).

Specifically, my import path looks like this, and I have it ignore everything except the immediate sub ‘Music’ folder, which is where iTunes places all files once imported:

I was recently looking in Roon for an album I’d imported into iTunes in 2014 and couldn’t find it. It was, however, available in iTunes and played perfectly. This led me to investigate whether the amount of files in Roon matched that in iTunes.

I did a quick all files search in the watched folder where Roon looks, and found it reports 21852, roughly what iTunes finds: 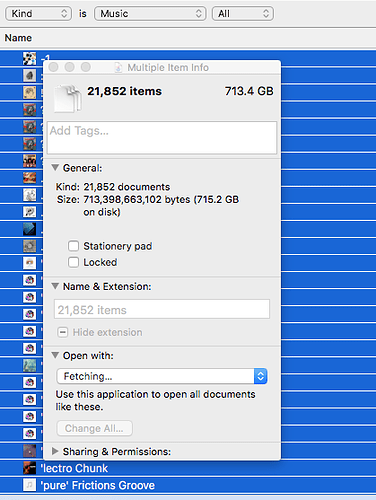 I’ve browsed through the threads here discussing discrepancies and have found only one duplicate/hidden album (which is a diff bitrate of the same album):

I checked the skipped files bit in settings and found only a few files:

HERE IS WHERE IT GETS INTERESTING.

I found the album I was looking for (Menahan Street Band’s Make the Road by Walking) in iTunes and it appeared to play fine. So I deleted it from iTunes, and then dragged it from the Trash back into iTunes. At this point, it was visible in Roon, and playable through Roon. But not only this, it recognised the specific year it was added to my computer (2014).

I’m not sure if this is related to my other support thread, but as you can imagine it’s a little concerning. If it was just a few files I would put it down to iTunes misreporting, but it’s quite a large slog and without doing a side-by-side comparison I have no way of knowing which ones are being skipped.

tl;dr Roon is missing 600ish files and I have no way of knowing which ones. Can you help?

You can check which files have been skipped by going to Library in the main settings menu via the remote on you mac or pc there is a button for skipped files. It will list files it could not add and possible reasons. Also if your metadata is not good and Roon did not find a match they might be under unknown artists ot unknown albums.

Hi, thanks for the reply @CrystalGipsy. I did have a look in the skipped files area and only four files were listed there. Maybe I could have made that clearer in the original post.

It could be then that’s it’s either a permission issues on your folder and files and Roon cant read the files. You could try changing the permissions on your music folder and see if it helps. Go into a terminal and type chmod -R 755 and then the path to your file.

And I would search in Roon to see if you have any unknowns or its miss matched it to something else. Roon does rely on good metadata to make its match.

In our KB we have an article about why some files may be missing from Roon.

Moving forward, the best option is to find another example of this and investigate why it’s not showing in Roon. Once we learn why it’s not importing, we should have a better idea of why some of these albums are missing.

When you find another example, don’t delete it / re-add it just yet.

First, take a screenshot of the album folder in Finder so we can see the full path and share that here. Once you’ve done that we will move forward with investigating why it isn’t visible in Roon.

Hi @Dylan, thanks for the heads up on the KB. Usually I check there for issues but forgot this time! I had a look through and based on this album being imported the second time (after being moved from out of watched folder and back in) it tells me that it’s not blacklisted/corrupt/etc.

Okay, so there isn’t an easy option to check between files in folders and those Roon sees in the folders? Is what I’ve described above a common occurrence?

I’ll keep an eye out, but an update is not likely to be soon. The album I listed above I hadn’t played the entire time I’ve had Roon installed (a little over a year). In my searching I found that I’d duplicate downloaded a vapourwave album, and it’s likely to do with the same issue since I vaguely remember adding those in the same year.

Could it be to do with my import settings? I’ve reported a bug with the way the ‘Focus’ function only looks at modification time here

Okay, so there isn’t an easy option to check between files in folders and those Roon sees in the folders? Is what I’ve described above a common occurrence?

Unfortunately, no. Roon does not have any knowledge of these files. Some files Roon will identify as being skipped, but if they don’t appear in Skipped Files then you can’t check for them in Roon. There are some common reasons why files not be imported (as mentioned above), so it depends on why they’re not being imported. With an example that is still at the file location but not in Roon, we can do some investigating to understand why. From there we should have a path forward with resolving the other files.

A post was split to a new topic: Some files aren’t importing into Roon