My core is ROCK running on a NUC 7i5 (Roon 1.6, OS 1.0). My remotes are running on MacOS and iOS. My library is small (5,000 tracks), and there’s plenty of free storage for music (internal drive on the NUC). Today I tried to add files to my library for the first time since moving to 1.6.

The files copied successfully to the music folder but do not show up anywhere – not as albums, not in the skipped files list, not in the tracks browser (even searching by path). I’ve tried adding the files the way I usually do (copying them to the music folder using the OS X Finder) as well as dragging them directly into the Roon window: no difference.

I’ve tried several different albums and also made sure that the filenames don’t have special characters.

I tried rebooting the NUC, restarting the server software, reinstalling the ROCK OS.

Thanks in advance for any thoughts.

Sure. In the second image, the expanded folder (Cassandra Jenkins) is one that won’t import. 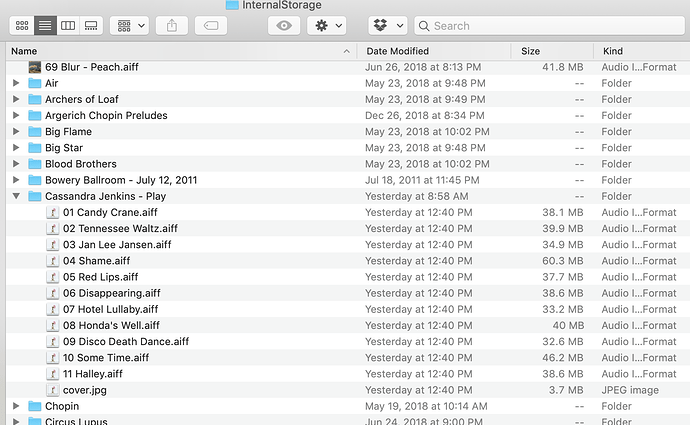 Thanks for the info! Moving forward with troubleshooting, I would like to enable diagnostics on your account so we can take a closer look.

First, I was hoping that you could select the 3 dots next to the Internal Storage watched folder and choose Force Rescan. Please make a note of the time you do so.

Once you’ve done this respond here with that time and your timezone and we will enable diagnostics for the team to review.

Thanks, Dylan. I did Force Rescan (which, for what it’s worth, I had tried already a few days ago) just now, at 8:51 p.m. Eastern time. Didn’t seem to have any effect.