Roon not playing anything

Description Of Issue
Started Roon yesterday and nothing would play. ReBooted and ReStarted Core several times. Logged out and back in to Tidal. Roon will not play Internal Tracks, Tidal, or Streaming radio. Track show in the interface but get a “Playback was interrupted because track was unable to load”.

Yes, everything is on the same machine, No NAS. Internet is working fine. I use this same system for internet browsing. Certainly not a network issue

I take it you’ve tried the all-time great tech suggestion, Reboot the computer?

Dumb suggestion, but can you play the same local music files that are failing in Roon from another app?

And have you installed any new software recently, just sounds like Roon can’t access anything on your computer. Some security software could cause that, but I am not a Windows user so not familiar with particulars on Windows.

Checked and yes I can play in other apps. Checked the paths and all paths are in tact. Did a forced rescan. Nothing seems to work.

OK, this is weird. Just opened up my iPhone and plays fine. So the core is fine, it’s something in the playback on the PC

Could be you selected the output as “exclusive mode” and something else is trying to use it as well? Sound locks up for me if I try that.

Not knowingly. Where would I find that setting?

Setting → Audio → Device Setup - > “Exclusive Mode”. If you use the same output for something else on that computer then you can’t have it in exclusive mode. 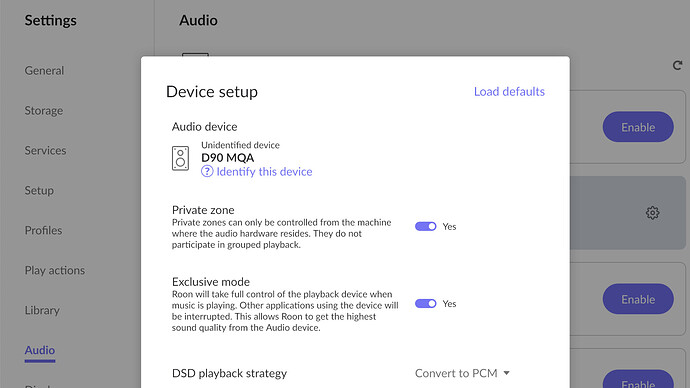 Thanks but my pc is just using a rather basic sound card and that option isn’t available.

Still nothing this morning. Skips all tracks. Had to resort to the desktop Tidal app

I don’t entirely understand how Roon’s “support” works, I’d have thought putting a ticket in support should get some response but doesn’t always seem to be that way. It’s a shame they don’t have a bug tracking system or something so you could alt least know you’re in a queue.

Can’t rely on random users to fix all other users issues.

It sounds like something is preventing Roon from being able to play to the PC. Do you have any other applications running that might have control of the audio drivers on the machine? Were there new apps installed recently or anything like that?

Can you try uninstalling and reinstalling the audio drivers on this machine?

I agree but I haven’t installed anything new. Audio plays fine via the Tidal app or MusicBee so I can’t see it being a driver issue.

Try reloading video drivers . There was a Windows update the other day ?

Didn’t change a thing. Came in this morning and everything is working properly. Who knows what happened.