Network Details (Including networking gear model/manufacturer and if on WiFi/Ethernet)
Connected to Netgear Nighthawk c7100V Router with a ethernet cable going to a switch and then connecting to the Sonic and Rendu. USB cable from the Rendu into the DAC.

Audio Devices (Specify what device you’re using and its connection type - USB/HDMI/etc.)
USB cable from the Rendu into the DAC.

Description Of Issue
Turned off the Sonic Transport and the Rendu to change the power cord. When I powered everything back up and now files look like they are playing but there is no sound. You can see the blue audio bars moving to the left of the > in the song but it doesn’t move at the bottom where it show how far it is into the song. 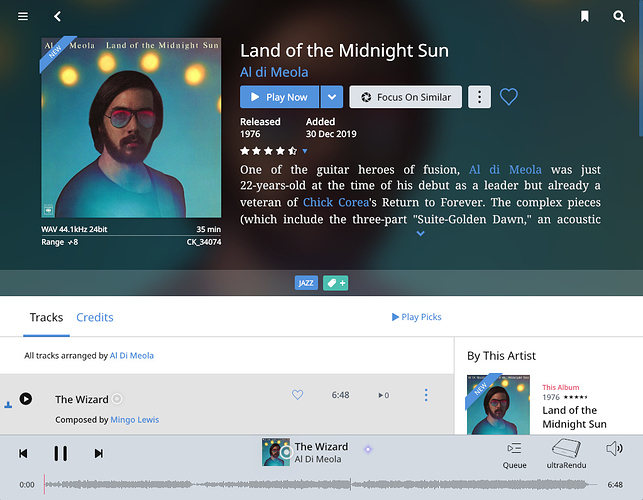 Are you able to play to other zones on your network? As an example, the “System Output” on a PC or Mac or the device output on an iPad would suffice to test playback.

If you are able to play to other zones on the network, I would look at the ultraRendu for further troubleshooting. Try power cycling the DAC as well as the ultraRendu itself to see if that resolves the issue.

I’ve power cycled the DAC and Rendu several times and it still does the same thing. The track status bar is frozen and does not move. The hardware is only feeding a single zone. This is new hardware from Small Green Computer and was just started last night for the first time. The owner Andrew Gillis did the set up over a screen share and everything was working just fine until a few hours ago.

If you play to System Output of a remote device instead does the same behavior occur?

I left my PS Audio DAC, Sonic I5 & Ultra Rendu powered down over night and I powered everything back on the following afternoon and I was delighted to discover that everything was performing as it should. It’s a mystery to me why this occurred because I power cycled all of the gear several times when the glitch first appeared but it didn’t work then. Sophisticated electronics can be temperamental at times, but I’m grateful all is functioning now. I signed up for the 60 day free Roon trial included with the Small Green Computer gear purchase and just after a few hours of interfacing with Roon I’m positive that I will be signing up on day 60. Will Roon send me a notification when my free trial is ending so I can join then? Thanks for your efforts on helping me to resolve this glitch!

I’m glad that things are working for you now! Please feel free to reach out if you ever have any other questions or issues.

Will Roon send me a notification when my free trial is ending so I can join then?

Yes, we will show a notification in the app and we will send an email.