I’ve had to reboot often in order to get the music playing - almost every day. Today no amount of rebooting restarting my dac, ultra Rendu, HQ player or Roon could fix the problem. No music at all.

You can see by the attached photo that HQ player is playing but Roon is not. 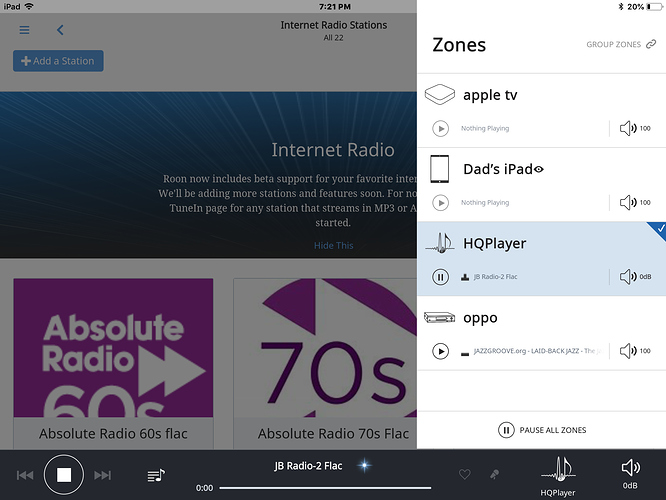 Thanks for contacting support, I’d be happy to take a look over this issue with you. As @wizardofoz mentioned, it would be really helpful for us to have an overview of your system setup as the first step in troubleshooting so that we can identify if anything could be physically causing this behavior. A few other questions I would also like for you to answer if possible:

Please let me know when you have a chance to reply to those questions and we can proceed from there.

From there to ethernet switch to Ultra Rendu then to USB DAC on OPPO 205.

Music is stored on a NAS drive hooked up to the Netgear Nighthawk router.

You mentioned that HQ Player is playing but Roon is not, is this the case for all of your DACs or is this behavior only exhibited on the HQPlayer? To be clear I don’t hear anything out of HQPlayer but on ROON the “bars” next to HQ Player are moving - indicating to me I think that it is getting data.

Are you able to play music to any of your zones?
Only one zone and no.

Have you tried a different kind of music file? I see that you are trying to play an internet radio station, is the behavior the same when trying to play local content on your Core?
I have also tried music stored on the NAS to no avail. This behaviour happens often when I first open the ROON app for the day. It has always been solved by re-booting everything but last night no amount of re-booting would fix the problem.

How are your DACs connected in the system? Via USB or over your Network? Ethernet to Ultra Rendu to OPPO 205 USB DAC input.

Tonight I turned on the Oppo and started Roon. Same deal , HQ layer appeared to be playing based on rhe movement in the Zones screen. I then went to the computer and closed out HQ player and restarted it.

I wish could understand why HQ player freezes up and how it reconnects.

My experience is that disconnection issues between HQP and an NAA (microRendu in my case, ultraRendu in yours) can arise if HQP “sees” the NAA disappear. This can happen if the DAC is switched to a non-USB input, or the ultraRendu is switched to another app while HQP is running.

Closing HQP before switching DAC inputs or switching the microRendu to another app has helped avoid disconnection for me.

HQP has improved its sensitivity to such switching, but it may be an explanation for the issue you are experiencing.

Thanks Andy - I will try that - shutting down HQP first

Not sure - may be a symptom.

So for several days if I shut down HQ player first, I have no issues on startup