I have 1156 compilations (i.e. where the album artist is “various artists”. They show up fine when browsing in album mode. When I do a search for “various artists” however, only about 105 show up. What’s going on?

When I do a search for “various artists” however, only about 105 show up

What are you actually trying to do? Have you tried focusing on Compilations? Or filtering the Album Browser?

I’m trying to make a shortcut to all my compilations. Before Roon I had been meticulous in entering “various artists” into the “album artist” field, and could group compilations that way.

Let’s be clear, I’m talking about compilations - albums with tracks by lots of different artists - not collections, albums with a mix of tracks by a single artist.

If I try and focus in Roon on compilations, the result is that manly collections appear, with only a handful of compilations.

I’m trying to make a shortcut to all my compilations. Before Roon I had been meticulous in entering “various artists” into the “album artist” field, and could group compilations that way.

Maybe this helps. Go to the Album Browser, enter „Various Artists“ as filter (funnel icon) and create a bookmark.

That’s exactly what I did to get to the position I am in!

Let’s be clear, I’m talking about compilations - albums with tracks by lots of different artists - not collections, albums with a mix of tracks by a single artist.

If I try and focus in Roon on compilations, the result is that manly collections appear, with only a handful of compilations.

Hrmm, you could probably just filter for “Various Artists” and then use a Tag? Or you could edit the compilation flag to match your definition?

What’s the tag Roon is looking at in defining a “various artist” album?

If the album is not already known to Roon (i.e. known = present in the online metadata sources), then you can make it explicit by setting the Album Artist metadata in the album tracks to be “Various Artists” using a tag editor, e.g.: 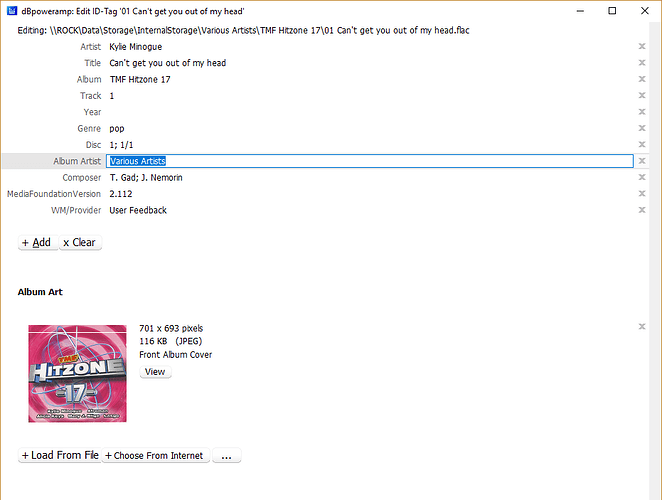 This will then be picked up by Roon: 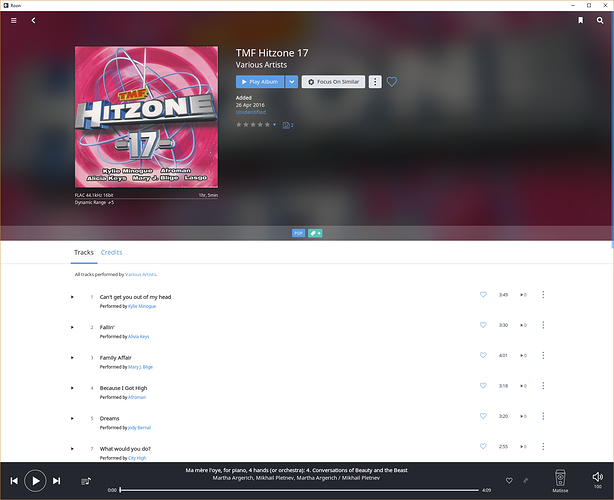 I have albums like these. Most of them have a correct album title tag, like in this example “hitzone 17” the album artist tags vary a lot and some don’t have any. I didn’t tag them myself, it’s how I bought them or how they where tagged by a ripper. Album artist tags are lots of times not being used. Now if Roon or any other player would incorporate the directory into the metadata it would recognize for itself that there are lets say 10 artists that have the same album title so it probably must be a "variis artist album even though it doesn’t have an album artist tag. Even better would be to define the content of a directory as an album. I have various artists albums with songs in it that have an album tag wich refers to the original album the song was on and have extra “compilation” I’m mainly talking about 10 to 15 year old downloads and rips here, a time where tgere was a lot of inconsistancy in music file tagging. All you could do is to retag the files so that at least the software of your choice knew how to handle it. Most people who started wich computer audio later won’t even know these kind of problems exist. I know it’s like asking Roon if the can provide a tool to read my old 5.25 inch floppy disc.

@mike - do you mean the filter rather than search feature? What I ended up doing was going through all of my albums manually, and setting compilation to “no” for the collection albums, and to “yes” for the compilations. Took a while, but now I can search for compilations and it comes up correctly.

@extracampine - the point being that Roon will only understand your Compilation albums as such if the albums are known to Roon’s online data sources. There’s no apparent rule in Roon’s import algorithms that says something along the lines of:
IF album is unidentified AND album tracks have Album Artist set to “Various Artists” THEN flag Album as “Compilation”.

What I did was what @FunkBrother suggested: simply filter in the Album Browser for “Various Artists” and assign a Bookmark “Compilation” to the results. Because I had previously curated my metadata to ensure that tracks in such albums had “Various Artists” set as Album Artist, it was a single step to create the bookmark.

It also has the advantage that if I add new albums that are not known to Roon, but which I have explicitly set the Album Artist tags to “Various Artists”, then these will automatically be covered by the Bookmark.

But the bookmark doesn’t make albums of them. They are still scattered around as single track albums.

That wasn’t the case for me - many of the albums were known to Roon’s online data sources, though they were still not recognised as compilation albums.

Your solution sounds like a fair workaround. I took the route of changing the album type for all my compilations to “compilation”, then setting the bookmark that way. I will have to make sure however that any new compilations imported have the compilation field set to “yes” though - perhaps your solution is more elegant.

That’s because you haven’t curated your metadata. You’ve said yourself that you’ve a lot of tracks that haven’t got “Various Artists” set in the Album Artist tag. Any decent tag editor will handle batch editing of tags, which greatly reduces the amount of work you’d need to do to whip your collection into shape. Then you should end up with all your compilation albums correctly recognised in Roon: 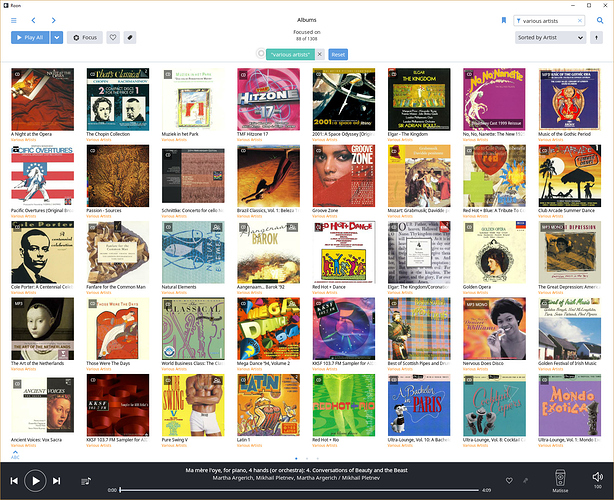 That wasn’t the case for me - many of the albums were known to Roon’s online data sources, though they were still not recognised as compilation albums.

What can I say? I’m an eclectic - guilty as charged

Yes I know. But the hardest part is not the tagging. The hardest part is to recognize and filter the “problem” albums in the first place. I have been busey with it. Ricghtclicking on a file to view the path and copy it to clipboard. Then go to a file browset to look at the content of the directory if it contains more then one file and to identify the album. Then open the files in a file tagger to finally retag them. Repeat that 100+ times. Batch editing is not possible because I can’t select a badge.

Yes I know. But just imagine how things worked 15+ years ago when I started with computer audio. Nowadays there is at least some kind of standard. Back then different software players couldn’t even read the same format of tags and some file taggings only allowed 3 or 4 tag fields. Yes, to todays standards garbage, totally agree.

Would it not be more straightforward to do this all within your file tag editor, rather than bounce back and forth between it and Roon?

Before I moved to Roon, I was using Media Monkey to structure my collection, and it was relatively straightforward to deal with metadata editing from a file directory perspective and batch edit. Mp3tag can work in a similar fashion.